Pets grounded by pandemic as flights are cut and costs soar 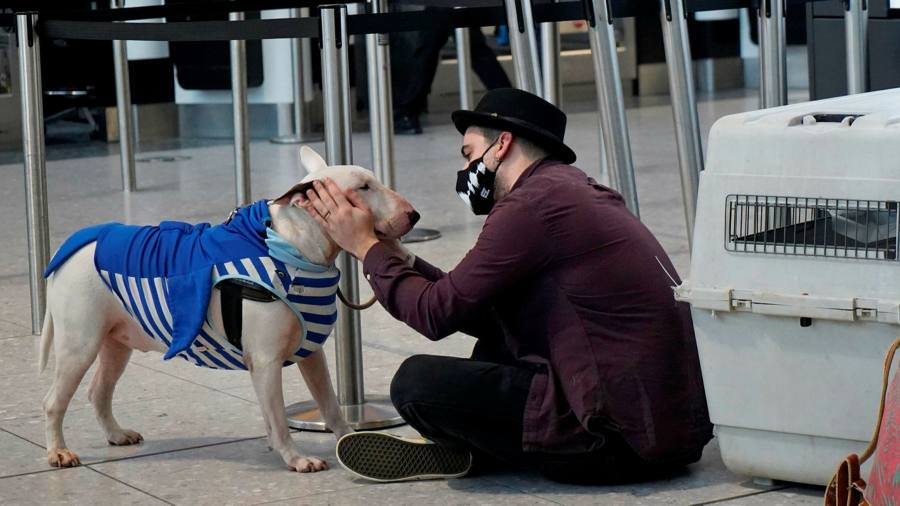 A menagerie of household pets, from dogs and cats to ferrets and budgies, has been left stranded around the world because of cancelled flights and skyrocketing air freight costs during the pandemic.

People’s pets normally travel in a part of the aircraft hold that is specially heated, pressurised and darkened to keep them calm.

But because airlines operated only half the flights they normally would last year, according to airline data company Cirium, and planes that are still flying prioritise essential cargo such as medical supplies and manufacturing equipment, prices have shot up and pets have gone to the back of the queue.

One airline quoted $6,500 to fly a dog from Los Angeles to London, three times the usual cost, according to one pet transportation company. Another unfortunate canine pal was kicked off a flight in Brunei after it had already been loaded, to be replaced by a Saudi prince’s cats, said Bob Ghandour, the owner of PetAirUK, another pet travel company.

The labrador had to wait six weeks for the next available flight.

“Normally, we would have a choice of three or four flights a day to get pets to JFK. Now we just have one. We used to fly pets to Tenerife on a daily basis. Now there is one flight a week,” said Ghandour.

Companies that specialise in moving pets have spent the past year dealing with animals stuck in the wrong country or sent on long road trips to be reunited with their owners.

Ghandour said business is about two-thirds of normal, but the amount of work needed to move one animal has risen enormously.

Some airlines have stopped taking animals entirely, at a time of unprecedented demand for air freight.

Julia Baber, a director at AnimalCouriers, has spent the past year scrambling to reunite pets with their owners.

“It is not unusual to have a dog booked on a flight and to find, two days before the journey, that the airline has had to pull the pet in favour of cargo. That is happening a lot,” she said.

For UK animals, many are being flown into European hub airports and then driven into Britain because of the skeleton flight schedules. Brexit has added an extra layer of complexity because of new paperwork needed to move animals between the UK and EU.

When countries have all but shut down international travel, more drastic measures are needed though.

In November, Worldwide Animal Travel, a Canadian company, spent C$150,000 to charter a Boeing 777 for the 15-hour flight from Vancouver to Melbourne to reunite 47 dogs and 19 cats with their owners.

Zaneta Tsang saved up for months for the A$7,000 to bring her corgi Sophie back.

“I definitely would do anything for the dog . . . anything for Sophie, she’s like a family member,” she told Australian broadcaster ABC.