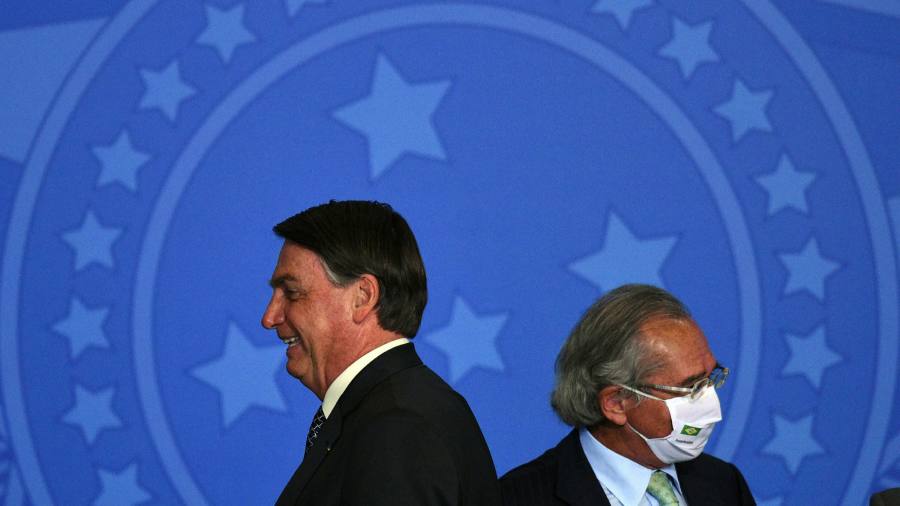 After Brazil was rocked by market turmoil this week, President Jair Bolsonaro sought to soothe tensions not with international investors or political opponents, but with his own finance minister.

“Paulo Guedes is an anchor of our government,” Bolsonaro said on Wednesday. The day before at a public event he had offered up similar praise to the minister, who sat inscrutable in the audience with his emotions hidden behind a Covid-19 mask.

Bolsonaro’s shock move a week ago to replace the chief executive of state-controlled Petrobras following disagreements over fuel prices has been widely viewed in Brazil as a snub to Guedes, a free-market economist who has long decried government interventions in business.

Moreover, the decision — which sent the oil producer’s shares tumbling and prompted a slide in the currency — has thrown into question the commitment of Brazil’s president to the structural liberal economic reforms that are Guedes’s trademark.

“The Petrobras incident spooked some investors, but I think much more from the read-across to policymaking and other areas,” said Eduardo Figueiredo, head of Brazilian equities at Aberdeen Standard Investments.

Ahead of his re-election bid next year, some fear Bolsonaro may pursue a populist agenda that could undermine the nation’s already strained public finances. With several reform-minded officials having already quit the government, including one charged with privatisations, some ask whether Guedes will join them.

“Cabinet changes are to be expected in the coming months. Top among the list of potential exits is the once-pivotal . . . Paulo Guedes,” said Jimena Blanco, head of Americas research at Verisk Maplecroft, a risk consultancy. “Guedes’s departure would threaten a definitive economic policy U-turn into full-edged populism.”

On taking over the finance portfolio, Guedes pledged to push through major structural reforms to kickstart Latin America’s largest economy after years of sluggish growth.

Yet apart from an important pensions savings bill, he has so far failed in his objectives. Promised tax reform, the overhaul of the administrative state and the privatisation of several large state-controlled companies have so far not materialised.

“When Bolsonaro was a [presidential] candidate, the market always imagined that Paulo Guedes would have a great influence on him,” said Cristiano Oliveira, chief economist at Banco Fibra, a business lender. “And what we realise is that this influence is much smaller.”

Despite slow progress and this week’s Petrobras controversy, those close to the finance minister insist he is in it for the long-run.

Guedes was committed “like never before”, said an aide, adding that the minister was fully focused on a key fiscal amendment to be voted on in Congress next week that aims to cut public sector expenses.

“We’ll keep working,” said another finance ministry official. “Paulo Guedes is leading our meetings and we had a big win with Eletrobras,” he added, referring to a bill this week to privatise the state-controlled power supplier.

Guedes has offered no public comment on the Petrobras incident since Bolsonaro’s intervention, which followed a dispute with chief executive Roberto Castello Branco over setting fuel prices in line with international rates. His office did not respond to questions from the Financial Times.

For some investors, the silence has been unnerving.

While the Covid-19 pandemic has caused inevitable delays to reform, analysts note that powerful figures in Brazilian politics do not share the finance minister’s zeal for rolling back the state, especially the large contingent of military generals. The new Petrobras chief chosen by Bolsonaro is an army reserve general with no experience in oil and gas.

Bolsonaro himself in the past harboured statist instincts, which many believe are returning to the fore.

“There seems to be a disaligment between the economics team and the heart of the government. This is an administration that doesn’t have the political capital to implement unpopular changes,” said Camila Abdelmalack, chief economist at Veedha Investimentos, an investment consultancy.

For foreign investors, the issue is whether the Petrobras furore is the harbinger of a more interventionist government approach or if the Guedes camp can steer Bolsonaro towards a more hands-off approach to business and greater fiscal rectitude.

Brazil’s debt level of more than 90 per cent of GDP is higher than any major developing economy other than China.

A key test will be whether the government can pass the so-called fiscal constitutional amendment in the coming weeks, which would bring some relief to Brazil’s coffers by capping public sector expenses. The government also intends to push ahead with more substantial reforms.

Paulo Uebel, who worked under Guedes but left the government last year, said his former boss would stay the course.