Perspective | Photographs of the spread of the war through Ukraine, city by city 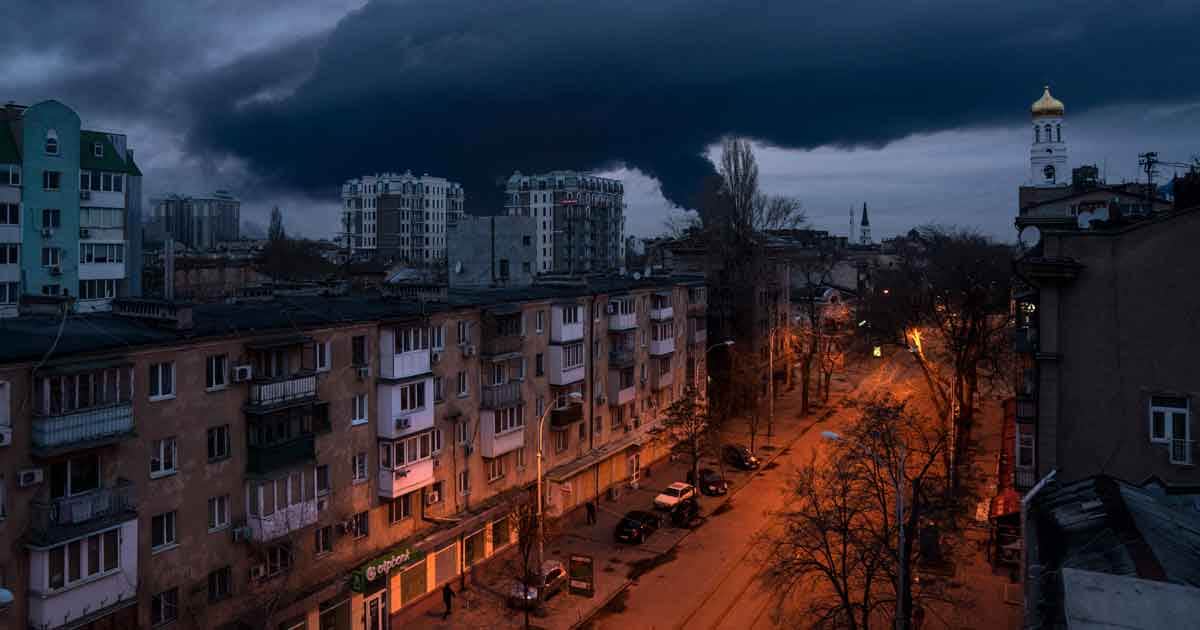 Images of resilience and loss from the front

LEFT: Orthodox priests follow an honor guard out of a church in Lviv after the funeral for Alexander Dymaretsky, 23, a Ukrainian soldier, on April 5. RIGHT: In Mykolaiv, people board buses on April 5, fleeing west toward Odessa or Ukraine’s border.

Odessa shook on the morning of April 3. It was early, before sunrise. There were three successive explosions, each one louder until the windows of my hotel room began rattling. The air raid sirens were going off. I texted Isabelle Khurshudyan, the correspondent I was working with, to see if she was heading to the bomb shelter in the basement of the hotel. She was.

I grabbed my cameras and laptop and hurried down the stairs to join the other guests, many of them journalists covering the war in Ukraine. A woman who worked at the hotel was sobbing quietly. Things grew quiet, aside from distant emergency-vehicle sirens wailing. Isabelle and I went to the terrace on the roof of the hotel. Three columns of thick black smoke, contrasting against the predawn blue light, were rising along the northern horizon.

I had been in Odessa for a week. The day I arrived, the sidewalks were empty, stores closed and cars scarce on the city’s streets. A few days later the changes were evident. Markets had opened, people were visiting the Black Sea beaches, and traffic was back. Now a massive cloud of smoke smothered the city. The war had come to Odessa.

Kharkiv, Mariupol and Bucha have become sealed in history as places where the Russians mercilessly killed civilians and reduced the infrastructure to rubble. Many other places in Ukraine have not endured the tragic fates of those cities. But everywhere I reported bore the weight of the war in some way, leaving no Ukrainian unscarred. Family members burying their dead, homes destroyed, children traumatized, loved ones torn apart are now everyday scenes.

Before I traveled to Kyiv in early February, I had never been to Ukraine. People in the city were going about life in a surprisingly normal manner, despite the Russian troops massing along the nation’s borders to the north, east and south. There were no defensive positions being put up, no crowds at the railway station seeking safe passage to the West. President Volodymyr Zelensky was scolding the West, saying it was hurting the Ukrainian economy by stoking panic. We visited Ukrainian military positions on the eastern front, along the line that cut across the now fiercely contested Donbas region. There was no sense of panic. Checkpoint barriers were made of wood, and soldiers were getting tattoos in their barracks.

Then on Feb. 24, shells came raining down on numerous cities. When I returned to Ukraine in mid-March, I entered through Lviv in the largely peaceful western half of the country. Regular life — bustling cafes and book markets — was now punctuated with daily funerals, air raid sirens, displaced-persons camps, humanitarian aid centers and a steady stream of fleeing refugees.

These scenes were repeated in Uman, Odessa and Mykolaiv. The last of those was a city desperate to return to some sort of normalcy despite being shelled daily. The administration building in the city center was hit with a cruise missile as workers started the day. At least 35 were killed. The Russians fired a cluster munition into a popular shopping area at 4 p.m. one day, when it would be most crowded, killing nine and injuring scores more. They did the same to a hospital. Fortunately, there were no fatalities in that incident, but terrified patients and expectant mothers had to evacuate to the basement. One woman gave birth in the bomb shelter. Funerals took place across the city every day. The burials were less well attended, as the graveyard was under constant Russian bombardment.

We drove past a parking lot full of buses the day after covering one of the funerals. People were boarding them, heading for the Romanian border or the relative safety of Odessa, two hours west. Their loved ones, some who chose to remain and some who had to, were reflected in the bus windows as the new refugees departed. We noticed these numbers swell as the shelling became more frequent.

During my career I have covered wars and conflicts in nearly a dozen countries, including the Russian invasion of Georgia in 2008. Ukraine, before the war, surprised me in so many ways. The warmth of the people, the stunning beauty of Odessa and Lviv, and the sophistication of Kyiv made a deep impression. Ukraine, during the war, has proved even more surprising. To see the Russians deliberately targeting and massacring civilians on a daily basis, as we observed in the rural and urban areas surrounding Mykolaiv, was painful. The resiliency, tenacity and strength of the Ukrainians, military and civilian alike, under such traumatic circumstances were staggering.