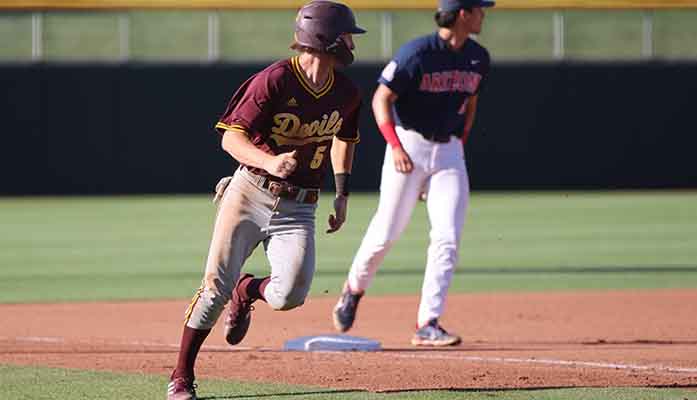 SCOTTSDALE – To call the five-day, 15-game inaugural Pac-12 Baseball Tournament that unfolded at Scottsdale Stadium last week “long-awaited” would be an understatement.

The four other Power Five conferences have all instituted baseball tournaments and each has become a sacred tradition. The SEC, ACC and Big Ten have operated theirs for over 40 years, and the Big 12 added one in 1997.

For college baseball recruits, committing to a Pac-12 baseball program used to mean forgoing that tradition. For the programs themselves, the lack of a conference tournament meant that they would only be able to furnish their resume for an NCAA tournament bid by playing games and opponents that had been predetermined before the season. As the years went on without a baseball tournament in the Pac-12, pressure on the conference grew from within.

“It’s something that coaches, student athletes and fans have wanted for years,” said Pac-12 assistant commissioner Drew Seidenberger. “There was a desire from the coaches, like, ‘Hey, maybe it’s time to switch it up,’ and we just thought it would help with NCAA selections and raise the exposure of Pac-12 baseball and be a great experience for student-athletes.”

The top eight regular season finishers in the conference this season qualified for the tournament. For teams in the middle of the pack like Oregon and Arizona, which entered as the No. 4 and No. 5 seeds respectively, the new tournament provided a chance to improve their candidacy for a higher seed in an NCAA playoff regional.

“I thought it was really cool,” Campos said. “I think it should have happened a long time ago. Tournament games, games where it’s double elimination, it just breeds better competition. I really liked it. I think moving forward, it’s only gonna get stronger and stronger.”

If this season reflected previous years, Arizona would be limping into the NCAA playoffs after getting swept at Oregon in the last week of the regular season May 19-21, while the Ducks would have ended the season in contention to host a regional round. Instead, however, Arizona and Oregon faced off again on May 25 in the first game of the tournament, and the Wildcats got their revenge on the Ducks with an 8-6 victory. Susac hit two home runs in the win.

“It’s great to get all these teams down here,” Arizona coach Chip Hale said. “It’s not easy to be top eight in this league. It’s a very good league. …I think it’s something that gets you ready for the (NCAA) tournament also.”

Oregon then faced off against No. 8 seed ASU in the loser’s bracket. After a disappointing first year under new coach Willie Bloomquist, the Sun Devils entered the Pac-12 tournament essentially needing to win the whole thing and secure the conference champion’s automatic bid into the NCAA tournament in order to keep its season alive.

Following a close loss to top-seeded Stanford in the opening round, ASU rallied to upset the Ducks behind a two-run home run from sophomore outfielder Kai Murphy. Both of the Ducks’ losses came in games with 9 a.m. start times, with players waking up around 5 a.m. to prepare.

“(For) a lot of us, this is the first time since travel ball that we’ve played at 9 a.m.,” Murphy said. “It’s tournament play … you’ve got to enjoy it and embrace it.”

The loss meant that Oregon dropped out of consideration to host an NCAA regional, and would instead be sent to Louisville as the No. 2 seed in that region. On the other side, ASU’s victory set up a Territorial Cup elimination game the following day after Arizona lost to Stanford in the winner’s bracket. Even though the temperature had reached triple digits around first pitch in that game, the stands at Scottsdale Stadium filled up as both in-state fanbases were well-represented.

“It’s a lucky break, I guess, for both of these fan bases to be able to drive here and see such a meaningful game for both their teams,” Seidenberger said. “Hopefully, this event becomes a thing where fans are gonna come regardless of who’s playing. But I think that’s always an extra bonus if the bracket works out that way, where you have two local teams.”

They were treated to a thriller as Arizona rallied in the bottom of the eighth to beat ASU 8-6, ending its archrival’s season.

“That’s what college baseball is about,” Bloomquist said. “In a great atmosphere in our first Pac-12 tournament, it stinks to go home that way. But when you just look at the big picture of the excitement level, hopefully this is something that will motivate these guys to work harder so that doesn’t happen to us next year. … We would have been done playing three games ago, and this gave us an opportunity to come out and still have a chance to get into the postseason.” 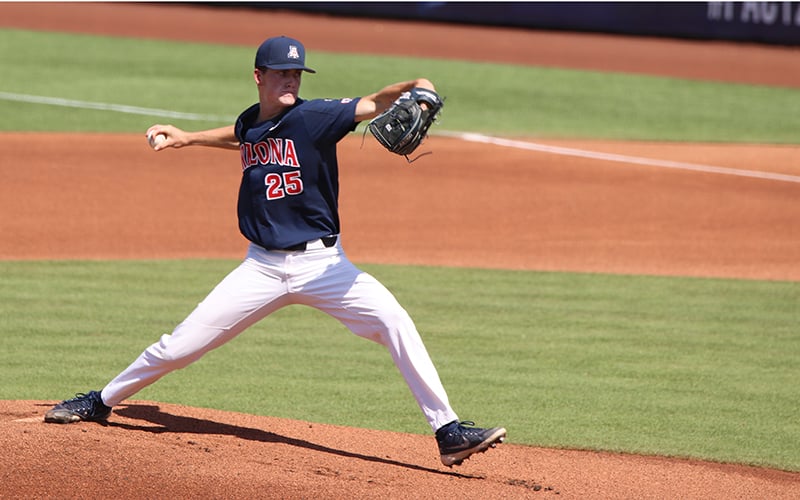 Stanford entered the tournament from the opposite perspective. The same old format that would have ended ASU’s season three games earlier would have rewarded the Cardinal, which finished the regular season on a 12-game winning streak, the Pac-12 championship outright and a chance to host an NCAA regional and super regional at their home ballpark in Northern California.

Instead, they had to travel down to Scottsdale and play four games in five days in an unfamiliar climate in order to secure the conference crown. Coach David Esquer’s squad did just that, running the table to extend its winning streak to 16 and winning the first-ever Pac-12 baseball tournament championship game, 9-5, over fellow powerhouse Oregon State. Esquer claimed that the hot, dry climate helped Stanford’s power hitters, as the Cardinal hit 11 home runs over their four tournament games.

“Great experience,” Esquer said after the title game. “It stresses you a little bit, it stresses your roster. And sometimes a regional can do that. … We needed everybody on this team to be the champions.”

Stanford junior shortstop Adam Crampton also valued how the Pac-12 tournament could help prepare his team for the NCAA tournament, which the Cardinal enter as the No. 2 overall seed.

Hale was also thankful for the facilities. After Susac left early in Arizona’s win over Arizona State due to a stomach bug, he was able to rest in an MLB-caliber clubhouse and recuperate to return to the Wildcats’ lineup the following day.

“Thank God there’s a nice clubhouse,” Hale said wryly. “It wouldn’t have been good at most Pac-12 schools.”

There were still plenty of bumps in the road over the initial tournament. An opening-round slugfest between Oregon State and Washington delayed the start time of the following game between UCLA and California until 10:15 p.m. Cal upset UCLA in front of a sparse crowd, then had another late start time in their winners’ bracket game the following day against Oregon State, which the Golden Bears lost.

UCLA eventually emerged from the loser’s bracket to play Oregon State in the tournament semifinals, a game which turned into a 25-22 slugfest that lasted nearly six hours as both teams’ pitching depth gave out. UCLA won in a 10th-inning walk-off, which meant that due to the double-elimination format, the two teams had to play each other again just 45 minutes after the first game ended. This time, it was the Beavers who won in walk-off fashion.

UCLA’s wild experience generated criticism of the new tournament and its format, with some in Bruins circles even arguing that the tournament was a bad idea to begin with. Others criticized the decision to play every game on the same field– leading to several delayed start times – and the decision to hold several games in triple-digit heat.

Although Scottsdale Stadium is equipped with misters over the bleachers that ran for nearly the entire tournament, most fans still preferred to stay in shaded seats further from the field to help temper the heat, leading to the appearance of an even emptier ballpark during game broadcasts.

Despite all this, the Pac-12 has committed to playing the tournament in Scottsdale at least through 2024, and Seidenberger enthusiastically raised the possibility that Scottsdale could remain home to the event for much longer than that.

“I think it’s an incredible opportunity for the student-athletes and it’s also great to have the fans come down to Scottsdale,” Seidenberger said. “I think it’s a place that we’re hoping to make a destination in the future. Everyone knows, every Memorial Day weekend, go to Scottsdale for the Pac-12 baseball tournament. It’s a great, great event.”