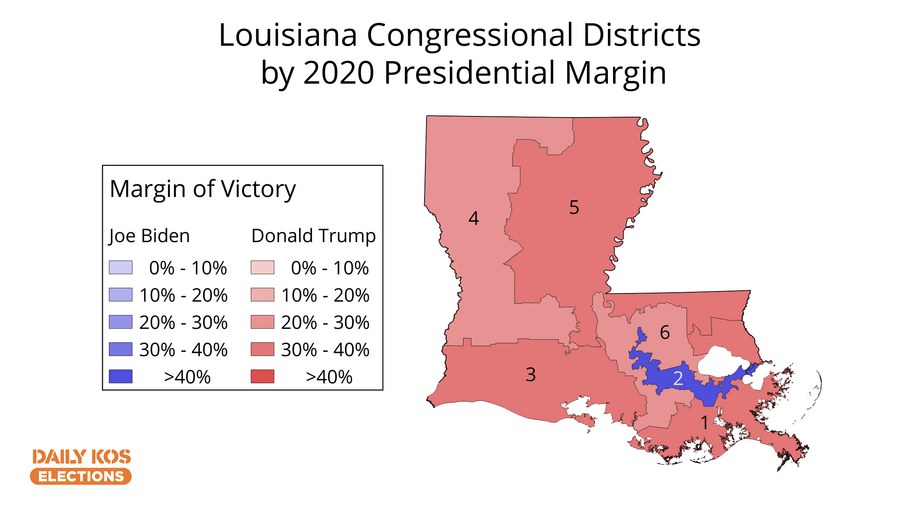 The one blue seat is the 2nd District, which stretches from the New Orleans area west to Baton Rouge. Republican mapmakers drew this constituency to take in as many African American voters as possible, and Biden’s 75-23 win was almost identical to Clinton’s 75-22 performance. Several candidates are competing in next month’s all-party primary to succeed former Rep. Cedric Richmond, who resigned in January to take a post in the Biden White House, and there’s no question that the eventual winner will be a Democrat.

Louisiana has always had a district anchored by New Orleans, and Democrats have held it since the 1890 election—with one very unusual exception a little more than a decade ago. In 2008, Democratic Rep. Bill Jefferson lost reelection to Republican Joseph Cao in a huge upset thanks to a confluence of scandal, a major change in election law, and a hurricane that struck the Gulf Coast.

Perhaps most importantly, Jefferson was under indictment on corruption charges after he was filmed allegedly taking $100,000 in marked cash from a government informant, $90,000 of which was later discovered in his freezer. For a time, though, it seemed like Jefferson’s electoral career would continue despite the scandal. The state temporarily abandoned its all-party primaries for congressional races in 2008 and 2010 and switched to the type of partisan primary-plus-runoff system that’s used in neighboring Southern states. Jefferson won the first round of the primary with a 25% plurality, and he prevailed in the runoff 57-43.

But timing is everything in politics, and events outside of Jefferson’s control dramatically altered the political calendar in Cao’s favor. The primary was originally set for early September, but the state postponed the contest for a month when Hurricane Gustav threatened the Gulf Coast at the end of August. (The storm also led to the cancelation of the first night of the Republican National Convention.) Primary runoffs instead took place on Election Day in November, with the general election for those races pushed off until December.

Unfortunately for Jefferson, his contest was one of those affected. The congressman won the runoff as Barack Obama was carrying his seat 74-25, but he still needed to fend off Cao in December. Turnout would have almost certainly dropped no matter what, but the state’s new election rules likely led many Democratic voters to mistakenly believe that they’d already reelected Jefferson in November when they’d only renominated him. Other voters who might otherwise have voted Democratic also stayed home, or even backed Cao out of disgust for the incumbent.

Still, it was a massive surprise when Cao defeated Jefferson 50-47, a victory that made him the first Vietnamese American to ever serve in Congress. Republicans were thrilled about their pickup after a second brutal cycle in a row, with Minority Leader John Boehner memorably putting out a memo afterwards proclaiming, “The future is Cao.” Jefferson himself was convicted the next year and began serving a 13-year sentence in 2012, though he ended up leaving prison in late 2017.

Cao, meanwhile, struggled to repeat his shock win against a stronger opponent. While Republicans enjoyed a very strong election cycle in 2010, the 2nd reverted to form when state Rep. Cedric Richmond, who had unsuccessfully challenged Jefferson in the 2008 primary, unseated Cao 65-33. That victory restored the 2nd District’s status as a safely blue seat, and even with Richmond’s departure for a job in the Biden White House, that’s not going to change in next month’s special.

The other March 20 special will take place in the 5th District to succeed Republican Luke Letlow, who died from complications from the coronavirus just weeks after he won an open seat race against a fellow Republican but before he could be sworn in. This seat, which includes Monroe and Alexandria in the central part of the state, backed Trump 64-34, and Republicans should have little trouble keeping it.

This area, though, did send a Democrat to the House under the state’s previous congressional map in 2002, but Team Blue’s hold proved to be very brief. State Rep. Rodney Alexander won an open seat race 50.3-49.7 that year, and he looked like he’d be one of the most vulnerable members of the Democratic caucus in 2004. Alexander filed to run for reelection as a Democrat that year, but he refiled as a Republican two days later―on the final day of the candidate qualifying period.

The congressman’s former party was infuriated, but Democrats were never able to take revenge. The incumbent won his 2004 race, as well as his next four campaigns, without any trouble. Alexander resigned in 2013 to take a position in Gov. Bobby Jindal’s administration, and, despite a high-profile scandal surrounding his immediate successor, Team Red has always easily held the seat.

Louisiana Republicans had control of the redistricting process in 2011 for the first time in living memory, but Democratic Gov. John Bel Edwards may be able to block them from passing another gerrymander. The legislature has only ever overridden two gubernatorial vetoes in more than two centuries of statehood (the last was in 1993), and while Republicans have the two-thirds majority necessary to defy Edwards in the state Senate, they don’t have quite the numbers on their own in the House.

That’s because, while Republicans outnumber Democrats 68-35 in the lower chamber, the House crucially also contains two independents who often vote with the minority party. This means that, if no seats change hands before redistricting takes place, and no Democrats vote for a Republican map, GOP legislators would need to win over both independents to pass their own boundaries again.

P.S. Because Louisiana does not assign pre-Election Day votes to precincts, we have relied on the same method to estimate congressional district vote totals that we recently used in Alabama.

The next shock in the pipeline for China’s economy: energy crunch