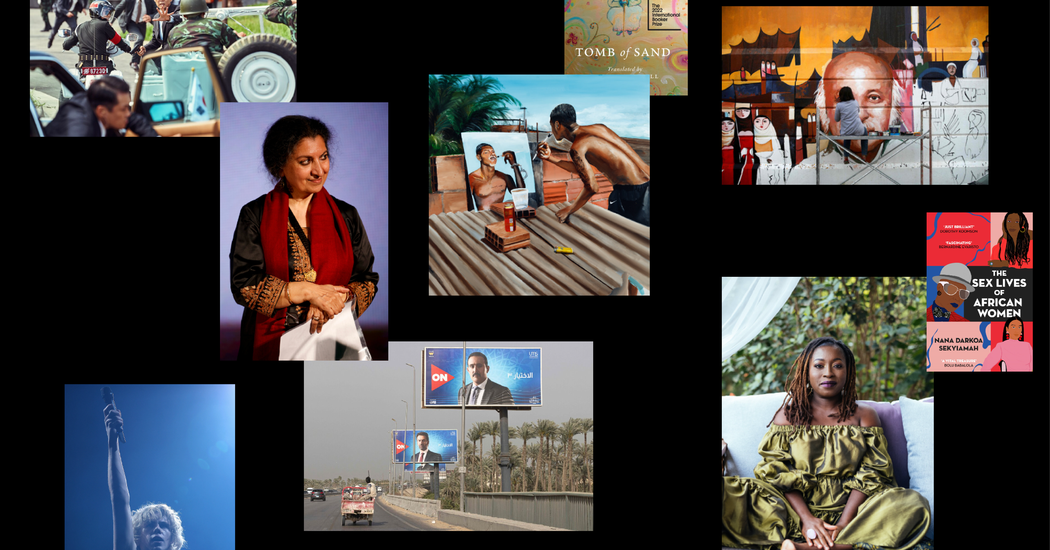 Our correspondents around the world cover breaking news, major investigations and the essential stories of their regions. But they’re not only reporters, they’re also residents of the countries they cover, whether Japan, Kenya, Iraq or Australia. Like residents everywhere, they keep an eye on and ear out for the breakout novels, blockbuster movies, hit TV shows and inescapable pop songs that people are discussing in their corners of the world.

As summer ends, we asked our correspondents to share a little from their lives. Here are a few of the cultural works that resonated with them.

In East Africa, an essay collection started a wave of frank conversations about sex.

“Everyone, and I mean everyone, has either read, is reading, or was at some point being shamed for not reading ‘The Sex Lives of African Women.’” said Abdi Latif Dahir, our East Africa correspondent.

The book, which features 32 first-person accounts by African women, was born of a blog founded by Nana Darkoa Sekyiamah, the Ghanaian author of the book who also shares her own personal journey toward sexual freedom. Published in 2021, the book “has been explosive since it came out,” said Mr. Dahir, who wrote about the phenomenon. The frank conversations about sex, freedom and spirituality show no sign of slowing down: This spring, a staged reading of the book in a 200-seat Nairobi auditorium was completely sold out.

One of the biggest Japanese cultural exports this past year was “Maria Beetle,” a novel by Kotaro Isaka that was adapted into the film “Bullet Train” — with its Japanese main characters recast as Brad Pitt and Sandra Bullock. Motoko Rich, our Tokyo bureau chief, profiled Mr. Isaka and his feelings about the novel’s transformation. (The original Japanese context, he said, didn’t much matter: “It’s not like I understand that much about Japan, either.”)

The year’s other ascendant phenomenon, she noted, was Atarashii Gakko!, a dance and vocal group that made its international debut with 88rising, an American music company that represents many Asian-American acts. Consisting of four young women who dress in high school uniforms, Gakko! has garnered a sizable following on TikTok, Spotify and YouTube, with their hit song “Nainainai” streamed millions of times.

A first for Israel on ‘Married at First Sight.’

“Married at First Sight,” a reality show that originated in Denmark years ago and has offshoots around the globe, including in the U.S., is an unlikely candidate to raise eyebrows in 2022.

But when the Israeli version featured a same-sex couple this year, in the show’s fifth season, viewers in the country paid attention, said a Times correspondent in Jerusalem, Isabel Kershner. Same-sex weddings are not officially recognized in Israel, where the Orthodox state religious authorities have a monopoly on legal Jewish marriage. Until recently same-sex couples had to physically travel to another country to be married, then register the union after returning home.

A legal case shifted that this year, when an Israeli court ruled that marriages performed through an online civil marriage service, based in Utah, would be sanctioned by the country. So the union between Guy Dalal and Matan Weiss, the couple on the show, spurred plenty of conversation — if little controversy, perhaps because the show tends to draw a liberal audience in Israel. Instead, much of the reaction, Ms. Kershner reported, was “of the ‘what took so long’ variety.”

Before the death of Queen Elizabeth II, before the resignation of Boris Johnson — and perhaps as a much-needed distraction from daily crises — many Londoners were entranced this summer by the “Wagatha Christie” trial, said Megan Specia, a correspondent in London.

An online feud that escalated into a libel trial, the scandal featured two women married to famous athletes: Coleen Rooney, the wife of the former Manchester United star Wayne Rooney, and Rebekah Vardy, who married Jamie Vardy, a striker for Leicester City.

Ms. Rooney accused Ms. Vardy of selling information about her personal life to a tabloid, citing her own Instagram sleuthing as proof — thus earning the “Wagatha Christie” nickname, a cheeky mash-up of Agatha Christie, the mystery writer, and the acronym W.A.G., which refers to wives and girlfriends of prominent athletes. Ms. Vardy accused Ms. Rooney in High Court of defaming her; in July, a judge decided there was no libel. But the world hasn’t heard the last of Wagatha: Ms. Rooney just signed an agreement to help turn the trial into a documentary for Disney +.

As a South Korean star went global, he found new success at home.

The actor Lee Jung-jae, who’s been famous in his native South Korea for nearly three decades, became well known to the rest of the world for his starring role in “Squid Game,” the Netflix hit that earned him an Emmy for outstanding lead actor in a drama.

But it was his debut as a director with the film “Hunt” that became a surprise blockbuster in South Korea this summer, said Choe Sang-Hun, our bureau chief in Seoul. (The film premiered to acclaim in May at the Cannes festival.)

A thriller set in the 1980s, “Hunt” follows two government agents trying to uncover an assassination plot, and has won praise for its deft examination of the complex relationship between South Korea and North Korea. North American audiences can expect the film later this year.

A rapper brought heat to Australia’s winter, and a book broke into a coveted club.

When asked to identify Australia’s song of the summer, Damien Cave, our bureau chief in Sydney, reminded Northern Hemisphere colleagues of the obvious: “It’s winter here.” But he had an answer about a dominant musical act, saying it was the Kid Laroi, a teenage Australian rapper and “the hottest musical act Australia has produced in years.”

For those seeking quieter distractions, he noted that a much-discussed novel this summer was “The Dictionary of Lost Words,” a debut by Pip Williams. The novel tells the story of words that were discarded or excluded from the original Oxford English Dictionary. It became the first Australian book to be chosen for Reese Witherspoon’s book club.

The Eurovision winner reinterpreted in Ukraine.

“Stefania,” a soaring rock tribute by the Ukrainian band Kalush, was inspired by the lead singer’s mother. But after the Russian invasion of Ukraine, the folk-hip-hop track was reinterpreted as a paean to the motherland, said Jane Arraf, our Baghdad bureau chief who helped report from the ground in Ukraine this year.

Kalush performed their song at the Eurovision Song Contest 2022 in May, delivering a moral, musical victory for Ukraine. In the months since, “Stefania” has seemed ubiquitous in the streets of Ukraine’s capital, Kyiv. “It’s almost as if it’s disloyal to pay attention to just ordinary pop hits or hit TV series now,” said Ms. Arraf.

A semi-fictional drama portrays Egypt’s president, and he says it’s all true.

In Egypt, the annual Ramadan TV season brings the debut of big-budget, highly anticipated shows. This year, the third season of “The Choice,” a popular political drama that blends fiction with facts and incorporates previously unseen footage of prominent figures, ignited controversy for its portrayal of Abdel Fattah el-Sisi, Egypt’s president since 2014.

“Everyone was abuzz about it and its political ramifications” said Vivian Yee, our Cairo bureau chief, noting that the Ministry of Defense is listed as a collaborator in the credits. In the show, Mr. el-Sisi is portrayed as a conquering hero over adversaries such as the Muslim Brotherhood — a depiction that critics of the show call overblown political propaganda. On the night that a particularly contentious episode aired, the president claimed in a speech that every word of the series was true.

There’s a growing trend in Brazil’s artistic circles to elevate the work of self-taught artists from the country’s favelas, the densely packed poor neighborhoods in Brazil’s biggest cities.

Perhaps no artist has earned more attention this year than Jota, said Jack Nicas, our Brazil bureau chief. The 21-year-old artist got his start painting on cardboard from discarded boxes; this year he was prominently featured in one of Brazil’s largest newspapers.

A breakthrough Indian novel, and a backlash.

The Times bureau chief for South Asia, Mujib Mashal, noted a book that made history this year: Geetanjali Shree’s “Tomb of Sand,” the first novel written in Hindi to win the International Booker Prize for Translated Fiction. (Several novels by Indian authors or authors of Indian descent have won the English-language Booker prize, including “Midnight’s Children” by Salman Rushdie.)

Although winning an International Booker represents a watershed moment for Indian literature written in Hindi, “Tomb of Sand” has not been without its controversies. After a complaint was filed over the book’s portrayals of two Hindu deities, Ms. Shree canceled an event scheduled in her honor at a hotel in Agra, India.

An Iraqi poet’s protests live on after his death.

The death of the Iraqi poet Mudhafar al-Nowab, at the age of 88, brought his poetry of protest to the forefront in Iraq this summer, said Ms. Arraf, the Baghdad bureau chief. Mr. al-Nowab, who had been living in the United Arab Emirates, was a treasured voice among Iraqi dissidents, many of whom quoted his work when they took to the streets in anti-government protests three years ago.

The poet had long lived in exile in many countries, including Syria and Egypt, before his death this year. He could be more acerbic than unfamiliar readers might expect. One poem includes the lines: “I pee on the governing police. It is the era of urine. I pee on the tables, the parliaments and ministers with no shame.”