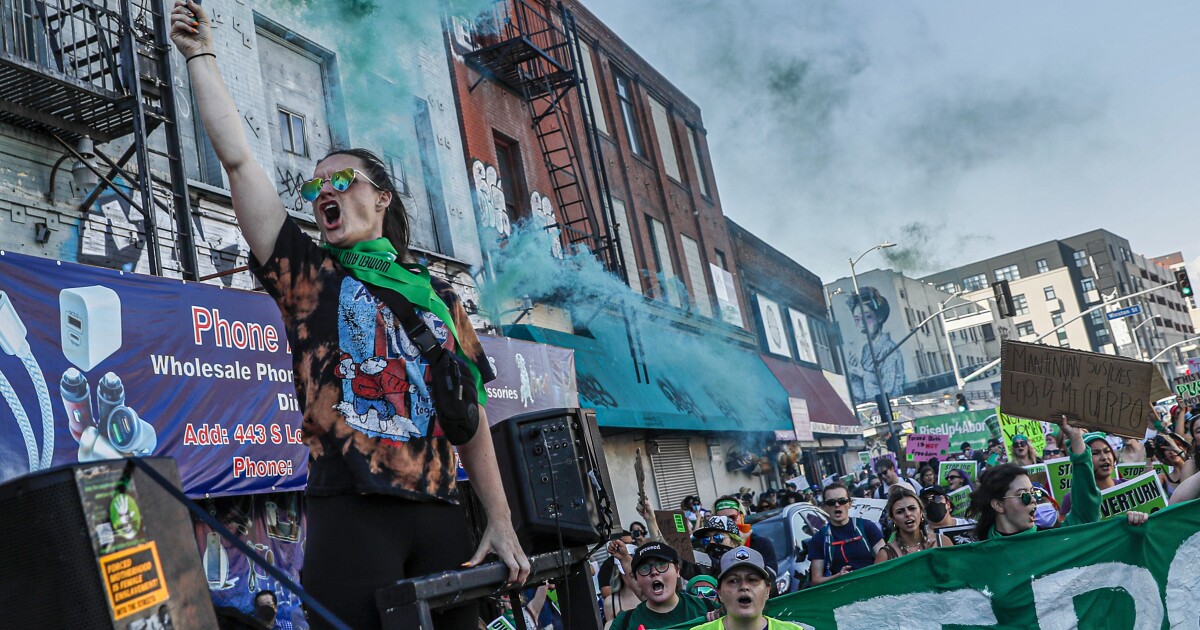 Days after the U.S. Supreme Court overturned Roe vs. Wade, removing federal protections for abortion access across the country, protesters continued to gather in downtown Los Angeles voicing their outrage and vowing to continue fighting for abortion rights.

Protesters gathered outside the federal courthouse on West 1st Street along green fencing separating them from the building. They passed out posters stating “Abortion Demand Without Apology” and displayed the names of women who have died or been imprisoned for self-induced abortion.

Becca Waite, an emergency-room nurse and organizer with RiseUp4AbortionRights, said her group started preparing in January. The move on Friday by the Supreme Court’s conservative majority to overturn the landmark 1973 Roe vs. Wade decision closely followed a leaked draft of the ruling published this spring by Politico.

Though expected, the final ruling was devastating to many across Southern California.

She and other activists called on people to walk out of their place of work “to show the ones that [made] this decision that if we are not granted our basic human rights, we will not continue to let this society function.”

There was no visible police presence early on in the rally, which began around 3 p.m. — a stark change from protests on Friday.

In the hours after the ruling in Dobbs vs. Jackson Women’s Health Organization was released Friday morning, thousands of protesters in Southern California took to the streets — in Hollywood, Westwood, West Hollywood, Long Beach, Fullerton, Irvine and across the Inland Empire.

In downtown L.A. on Friday night, some marched on the 110 Freeway and later the 101 Freeway, temporarily blocking traffic. The Los Angeles Police Department declared an unlawful assembly by 9 p.m., with officers in riot gear forming skirmish lines and warning protesters to leave or face arrest.

According to Times reporters, witnesses’ videos and interviews with other media members on the ground, journalists on Friday were pushed, struck with batons, forced out of areas where they had a right to observe police activity and blocked from entering other areas where police and protesters were clashing and arrests were being made. Fewer police showed up to rallies on Saturday and Sunday.

Annie Day, another organizer with RiseUp4AbortionRights, addressed the crowd on Monday afternoon. She shared a post she’d read about a woman who suffered an ectopic pregnancy — a life-threatening complication in which a fertilized egg implants and grows outside of the main cavity of the uterus — and nearly bled to death because doctors had to consult with lawyers before treating her.

“Suddenly we are in a world where a clump of cells, a fetus, which is dependent on a woman, comes first,” Day said. “We are not accepting this defeat, we are going to come back stronger.”

Casey Vasquez and Unna Santiago-Caycedo, both 17, attend Woodrow Wilson High School in northeast L.A. They told The Times young women their age are under significant pressure.

“I’ve had a pregnancy scare before, and I’ve been on birth control for a couple of years,” Santiago-Caycedo said. “So people will say, like, ‘Just use birth control.’ I just feel like women that get pregnant are always, like, blamed for being pregnant. It’s like, we can do like all the right things and still get pregnant.”

Vasquez said older generations have “completely messed up so much” of the environment and the country, leaving younger generations to try to fix the issues.

She later spoke to the crowd, her voice cracking and tears welling up as she shared the story of her mother’s struggles coming to the U.S. from Colombia.

Waite said the current fight to protect abortion rights is part of a long lineage of international activism.

The green bandana, she said, signifies solidarity with women in Latin America who “rose up in their millions and took up the green bandana as a symbol against femicide and against illegal abortion. And they won those fights.”

They read a statement from abortion rights activists from Peru, Argentina and Brazil calling on President Biden and others in government.

“This is your fight too,” the statement said.

Waite hopes to increase the number of people protesting for abortion rights “from thousands to hundreds of thousands.”

“The problem is that people don’t continue that energy, especially in an age of social media,” she said. “It’s a week, it’s a month, it’s an afternoon, but it takes more than that.”

She and other activists are calling on people to challenge their friends and family to not be silent supporters.

“It’s not enough to sit back and say ‘I’m pro choice.’ We need you in the streets,” Waite said. “We need you here, shoulder to shoulder because we need millions of people to bring the gears of society to a grinding halt.”

Further demonstrations are planned, with Wednesday being billed as a “day of mass disruption,” Day said.

Protesters continued arriving during the rally’s first hour, swelling the crowd to around 400.