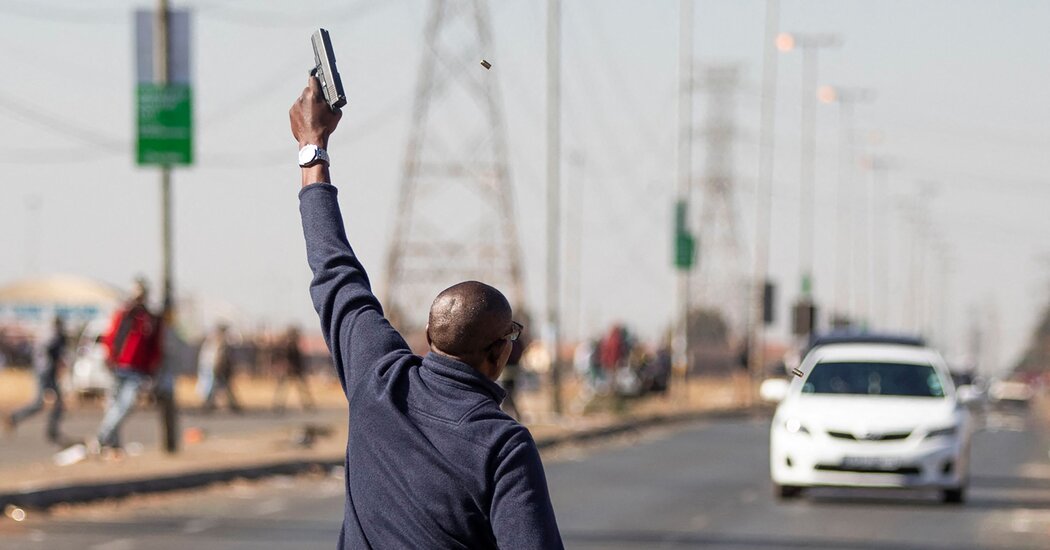 JOHANNESBURG — In the past few weeks, South Africa was gripped by the biggest explosion of unrest in decades. Shopping malls and warehouses were looted, supply trucks attacked and businesses destroyed. At least 337 people died.

Initially, as families loaded up consumer goods they would otherwise be unable to afford, the tumult seemed like an organic expression of popular discontent. After all, with unemployment over 30 percent, hunger widespread and inequality spiraling, there’s ample cause for anger. But far from a spontaneous social revolt, the rioting seems in fact to have been politically orchestrated.

After Jacob Zuma, the country’s former president, was arrested on July 7 — to serve a 15-month sentence for contempt of court — his supporters and allies vowed to make the country ungovernable. Coordinating a campaign of economic sabotage through WhatsApp, Telegram, Twitter and other social networks, they succeeded.

President Cyril Ramaphosa has since sought to calm the country, suggesting the worst is over. But it doesn’t feel that way. In fact, the events of the past weeks have demonstrated a bleak truth about the country. The deep rot of South Africa’s social and political order — rife with racial tension, communal mistrust, injustice and corruption — is now on full display. The rainbow nation, supposed beacon of reconciliation, is falling apart.

At the heart of the discord is the ruling African National Congress. In the 27 years since it steered South Africa to democracy, it has carried the hopes of millions of South Africans. Drawing on its reputation as the party of liberation, it has strong support and remains electorally unassailable. But it has now become squarely a source of division. A devastating battle for its soul is underway, with the country as the battlefield.

Driving the conflict are the forces loyal to Mr. Zuma, mostly composed of disgraced politicians who seek to be returned to their former positions of privilege. Though the A.N.C. always promoted the rise of a Black elite, Mr. Zuma’s presidency, beginning in 2009, changed the focus: The state, rather than the market, became the main site for opportunity and enrichment. A spurious ideology of “Radical Economic Transformation,” spun as a radical challenge to South Africa’s white-dominated private sector, provided rhetorical cover for corruption and patronage. Now removed from power, the beneficiaries of Mr. Zuma’s rule are determined to wreak havoc.

In their sights is Mr. Ramaphosa, who rose to power in 2018 on an anti-corruption platform. His efforts to root out endemic graft in his party — and by extension, the South African state — have been mixed at best. Before the drama of Mr. Zuma’s arrest, the country was stunned by the news that Zweli Mkhize, the well-liked health minister, played a role in awarding a contract worth $10 million to a communications company run by two associates. Though Mr. Ramaphosa recently escalated his anti-corruption push — not least by suspending the A.N.C.’s secretary general this year — Mr. Mkhize’s example underlines how widespread the looting of state resources has been. It’s clearly not just a case of bad apples. The batch is rotten.

And yet no political force looks able to hold the A.N.C. to account. The two major opposition parties, the Democratic Alliance and the Economic Freedom Fighters, have retired any ambitions of becoming mass parties capable of challenging the A.N.C. After some years of growth as the anti-Zuma opposition, the Democratic Alliance has doubled down on its identity as a party of white liberals; the Economic Freedom Fighters has reduced itself to an extension of Mr. Zuma’s faction of the A.N.C. Tellingly, in his last days as a free man, Mr. Zuma was flanked by Dali Mpofu, a former national chair of the E.F.F.

In the absence of effective opposition, the A.N.C. is coming apart at the seams. Never a party of ideology, it has always been a broad coalition united in opposition to minority rule. Since the end of apartheid, it has struggled to develop a stable political identity. Given the party’s enduring popularity, the challenge is less regaining public credibility than finding internal coherence. But until another party rivals the A.N.C., we can expect it to rest on its laurels. That spells a future of more factional strife and poor governance, at great cost to the country.

The president, for his part, is using the unrest’s aftermath as an opportunity to rebuild. As one of the key negotiators of South Africa’s liberal Constitution, Mr. Ramaphosa hopes to tap into the spirit of that time — a moment also marked by violence, when things felt equally on a knife’s edge. But these reserves are low. Back then, at the end of apartheid, the promise of democracy filled many with hope. Now, after nearly three decades of things remaining mostly the same, many people just feel despair.

An uneasy calm has settled. How long it lasts is anyone’s guess. Yet the past few weeks have conclusively dispelled many illusions about the country, none more so than the myth of South African exceptionalism — of a South Africa more peaceful than its African neighbors, more developed and with a future that bends inevitably toward good and triumph. The reality, as we await the next outbreak of violence, is much uglier.

Washington, D.C. on high alert ahead of Saturday's "Justice for J6" rally

PG&E charged with manslaughter for sparking California wildfire By Reuters