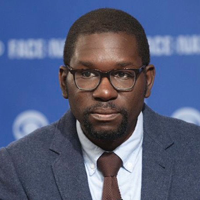 Jamelle Bouie sees similarities between Madison and Charlottesville, Virginia, where he graduated from the University of Virginia in 2009 and now lives.

Those similarities start with how both cities — despite concentrations of educated liberals — fail rather miserably in making either a place where Black people are able to regularly succeed.

Bouie, a brilliant 35-year-old columnist for the New York Times, was described in 2019 by the Columbia Journalism Review as “one of the defining commentators on politics and race in the Trump era.” He writes about politics, history and culture for the Times and is a political analyst for CBS News.

He will speak at the Monona Terrace Convention Center on May 4 as part of a program by the University of Wisconsin-Madison’s La Follette School of Public Affairs.

Bouie and I discussed why college towns like Madison and Charlottesville, for all their stimulating college cultures and general economic vibrancy, may seem like Shangri-La for white people but not for Black people.

In our half-hour talk on Zoom, I described Madison’s decades of stark race-based differences around academic achievement and home ownership rates. I told him how Black leaders here are currently building a cultural center, an economic incubator, a building trades training school and how a local Black-led charter school has become a national model.

“I have a lot of thoughts on this,” Bouie began, agreeing that for white people, Charlottesville and Madison are both attractive places to live. “But for its Black population,” he added, “Charlottesville is often a very difficult place to live and that is because the singular institution here, as with the University of Wisconsin in Madison, is the University of Virginia.

“The University of Virginia has historically used its weight in ways that harm our community,” Bouie said. “Meaning, you can be employed at the university as a janitor, as a domestic worker of some sort, working in the kitchen, doing all of the day-to-day work that makes the place run, but there was never any path towards middle-class incomes, towards career stability, towards anything like that,” Bouie said.

“The university and the institutions around the university essentially serve to segment the laboring classes in Charlottesville.”

For Black, low-income employees, “there was not really any way for you to accumulate capital, to build wealth. If you were lucky enough to open a business that might be a path forward, but that wasn’t a thing that the typical Black Charlottesvillian could do.”

He continued, “You couple that with basically a century of highly restrictive housing policies, both knocking down and tearing down historic Black neighborhoods, and also putting tight restrictions on the supply of housing, which is more or less putting it out of reach for people who are below the middle class.

“It’s like very easy to explain the racial disparities, the racial stratification of Charlottesville. I have to imagine something very similar in Madison.”

Bouie said: “I think liberals have a very hard time seeing this because I think the liberal conception of racial equality is all about attitude and behavior and individual belief. So if no one holds any openly, outwardly racist views, if there is a general civility, well, that is kind of the veneer of a place. I think many liberals just cannot perceive racial disadvantage that is economic, that is material.”

One of those steps would be raising wages for service workers, creating paths to middle-class status, he said.

I asked Bouie about cities where I see large Black middle classes such as Washington, D.C., which I visit regularly.

“The Black middle class in D.C. or in Richmond, Virginia, or Baltimore, Maryland, and sort of in big cities in general is usually built around civic and municipal employment,” Bouie replied. “That ends up being the path to middle-class status. Universities can serve that role as well, but they actually have to open up their hiring practices, which means that people who might be invested in the status quo may lose something as a result.

“Then there’s housing,” he continued. “Good wages really only matter if you can afford to buy something or rent something. If you’re trying to address racial inequality in a serious way by trying to adjust racial stratification, then opening housing both in terms of maintaining and building public housing and looking for ways to deeply subsidize market-rate housing” are logical tactics.

“Those things do not require the dominant white liberal class to sacrifice anything,” Bouie said. “More homes and better jobs do not hurt anyone. It’s positive for the community, but it does require people giving up their vision that their place is without real flaw, that room for improvement at all is on the margins and not root and branch.

“It requires them to reorient themselves to the reality of the place. That arguably is even more difficult than to actually give up something material. If it was just a matter that you have to give up the equivalent of 50 bucks a year, then I think people would say, ‘no problem,’ but if you have to give up your longstanding image of the place in which you live, which in some sense means revising your identity in fundamental ways, that is a much more difficult thing to ask people to do,” Bouie said.

He is noted for being provocative. Writing in Slate after the 2016 election, the headline was: “There is no such thing as a good Trump voter.” The subhead: “People voted for a racist who promised racist outcomes. They don’t deserve your empathy.”

That said, his indictment of liberals in college towns echoes something Gloria Ladson-Billings, a renowned UW-Madison professor emerita, told me for a column last year about liberals and race.

“Everyone is for the most part self-interested,” she said. “You can only go so far before people start seeing it as an erosion of something they have or have access to. There are those limits that we can’t seem to get past.”

I think Madison’s white liberals could do more to make “Z” happen.