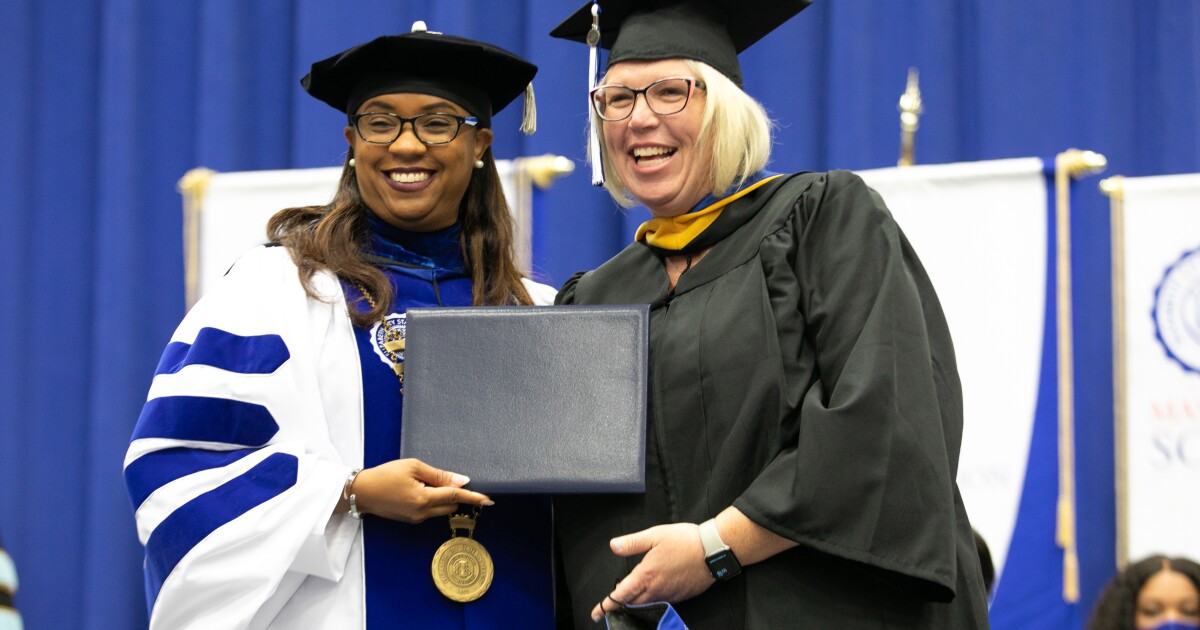 Deanna Byrum knew she wanted to stay close to home after graduating from high school more than 20 years ago, so she enrolled in community college to get a degree in business.

“You really didn’t hear a lot about people having to have a bachelor’s degree to attain jobs, so I was just satisfied to get my associate degree,” she said.

But times change. In the spring of 2021 — after raising a daughter, surviving a divorce, and providing care for her ailing parents — Byrum obtained her bachelor’s degree at Elizabeth City State University, a historically Black public institution in North Carolina where she worked full time in the provost’s office. She started out slowly, taking just two courses her first semester, and eventually achieved her goal with the help of the University of North Carolina system’s tuition waiver program as well as federal Pell Grants.

Byrum, 44, is one of hundreds of adult learners — students age 25 and up — who have flocked to North Carolina’s historically Black colleges and universities in recent years. The colleges have started to pay greater attention to the need and potential of students like Byrum, and a major foundation has begun supporting the efforts.

At Fayetteville State University, adult students make up about 48 percent of the overall student population. At Elizabeth City State, administrators have seen a nearly 50-percent increase in adult-student enrollment in just the last two years. Adult learners now account for 22 percent of the university’s student population. That growth has prompted administrators to take a closer look at the needs of adult learners — and make concrete changes to accommodate them.

The researchers found that while the HBCUs in the state are attracting adult learners, most of the faculty don’t know how to support them, especially in the world of online learning — a world that didn’t exist when most adult learners began their education. So the researchers are now working to design equity-focused training for faculty in virtual learning environments.

But the virtual aspect is far from the only hurdle. Like Byrum, many adult learners are juggling one or more jobs, children, and caretaking for elderly or sick parents on top of a full course load.

The threat to their persistence is oftentimes the challenges that are happening outside of the classroom.

“We have basically working women who have children and there’s a lot of needs there,” said Rollinda Thomas, assistant vice chancellor for academic affairs at Fayetteville State.

For Byrum, returning to college meant 12-hour days that included completing online assignments in hospital waiting rooms during her mother’s doctor visits, leaving work meetings early to turn in assignments before an 11:59 p.m. deadline, and making sure dinner was cooked for herself and her daughter. They were both enrolled in online school when the pandemic began.

“I don’t like to procrastinate, but it comes to a point when you’re a full-time learner and you’re juggling a full-time job, a full-time school schedule, and a family life. Sometimes you just have to prioritize what gets done and when it gets done,” she said.

In accepting the awards, the participating HBCUs had to create committees composed of student-affairs employees and participating adult learners to discuss strategies for improving their experience.

At Johnson C. Smith, a specialist will be hired to focus exclusively on adult learners, serving as a liaison and proposing adjustments for more adult-friendly policies. Fayetteville State is using the funding to capture more data on the adult-learner population. And Elizabeth City State will develop a policy to enable adult learners to receive college credit for work experience gained outside of the classroom at their full-time jobs.

While the increase in adult learners is motivated by career advancement, this student population is flocking specifically to HBCUs due to affordability and size, said Gary Brown, vice chancellor for student affairs at Elizabeth City State. Some administrators are targeting this population amid an uncertain demographic outlook for students 24 and younger, even as federal data show declines in adult-learner enrollment at HBCUs in other states. “Our continued trajectory in increased enrollment is tied to our success in attracting traditional students, but an even more strategic approach to garnering more adult learners,” he said.

Elizabeth City State is part of the NC Promise Tuition Plan, an initiative established by the state to keep prices low at participating colleges. In-state tuition is about $500 per semester, and out-of-state students pay $2,500. Among the five universities chosen by the Lumina Foundation, undergraduate enrollments range between 1,000 and 6,000.

Smaller class sizes allow adult learners to establish relationships with other students, faculty members and administrators, which may be more difficult to do at larger institutions. This contributes to more of a “family feel,” Brown said.

He added that the predisposition of HBCUs to serve minority communities puts them in a position to better accommodate adult learners. “In a way, this is kind of an expansion on what makes us who it is that we are,” Brown said.

At Fayetteville State, adult learners are faring well academically. The average GPA for adult learners is about 3.0, according to Thomas, which surpasses that of the student body as a whole.“So academically, they can do the work. That’s not the problem,” Thomas said. “The threat to their persistence is oftentimes the challenges that are happening outside of the classroom.”

Despite the challenges, Byrum graduated in the spring of 2021 with her daughter, who graduated high school at the same time. Byrum had a final GPA of 3.27. “I wanted to do this not just for me, but because I knew my parents would be so proud and I also had a teenage daughter who was watching every move that I was making and I was making such an impact on her life,” she said.

The many non-economic benefits of OER (letter) | Inside Higher Ed