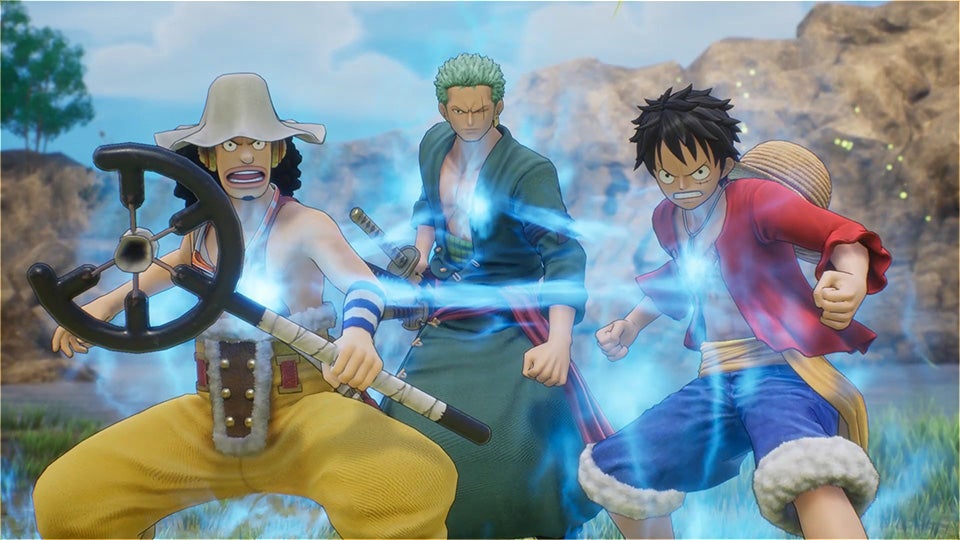 Revealed on the game’s Japanese website, and spotted by DualShockers, the combat has a UI reminiscent of the super-stylish Persona games and appears to feature a rock, paper, scissors system where fists beat guns, guns beat swords, and swords beat fists.

Several bizarre looking enemies can also be seen in the screenshots (below) including a giant fire-breathing lion/dragon, monkeys dressed as bumblebees with ice-cream hats, and a comparatively normal giant scorpion.

Two new characters have also been revealed for the game including Lim, a “mysterious girl who hates pirates” and Adio, a drifter and explorer.

Movement appears to be another element of the turn-based combat, though it doesn’t look to be a fully-fledged tactical RPG like a Fire Emblem game, for example. Instead, distance appears to affect what kind of attacks a player can do: get in close to swing your sword but stand back to fire a gun.

Regular battles also have a chance to grow unexpectedly with the invasion of more monsters, similar to a mechanic seen in Persona 5, for example, where the battle-worn player can choose to take on the extra challenge for extra rewards or just make a run for it.

Team up abilities will also feature in One Piece Odyssey, letting players perform powerful combination attacks with other party members if certain conditions are met.

One Piece Odyssey was revealed in March and will be available for PlayStation 4 and 5, Xbox One and Series, and PC, though the JRPG doesn’t have a release date (or window) as of yet.

It’s not the only One Piece project in the works as Netflix’s live-action series has now officially begun production.