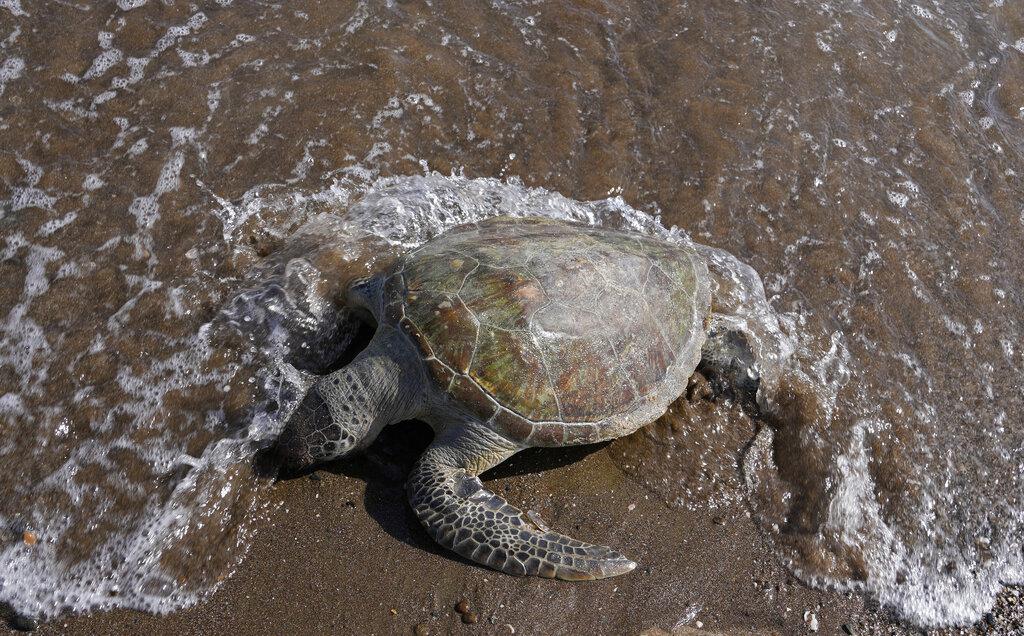 A dead green sea turtle washes up on the beach in the Khor Kalba Conservation Reserve, in the city of Kalba, on the east coast of the United Arab Emirates, Tuesday, Feb. 1, 2022.

WASHINGTON — Even the king cobra is “vulnerable.” More than 1 in 5 species of reptiles worldwide are threatened with extinction, according to a comprehensive new assessment of thousands of species published Wednesday in the journal Nature.

Of 10,196 reptile species analyzed, 21% percent were classified as endangered, critically endangered or vulnerable to extinction — including the iconic hooded snakes of South and Southeast Asia.

“This work is a very significant achievement — it adds to our knowledge of where threatened species are, and where we must work to protect them,” said Duke University ecologist Stuart Pimm, who was not involved in the study.

Similar prior assessments had been conducted for mammals, birds and amphibians, informing government decisions about how to draw boundaries of national parks and allocate environmental funds.

Work on the reptile study – which involved nearly 1,000 scientists and 52 co-authors – started in 2005. The project was slowed by challenges in fundraising, said co-author Bruce Young, a zoologist at the nonprofit science organization NatureServe.

“There’s a lot more focus on furrier, feathery species of vertebrates for conservation,” Young said, lamenting the perceived charisma gap. But reptiles are also fascinating and essential to ecosystems, he said.

The Galapagos marine iguana, the world’s only lizard adapted to marine life, is classified as “vulnerable” to extinction, said co-author Blair Hedges, a biologist at Temple University. It took 5 million years for the lizard to adapt to foraging in the sea, he said, lamenting “how much evolutionary history can be lost if this single species” goes extinct.

Six of the world’s species of sea turtles are threatened. The seventh is likely also in trouble, but scientists lack data to make a classification.

Reptiles that live in forest areas, such as the king cobra, are more likely to be threatened with extinction than desert-dwellers, in part because forests face greater human disruptions, the study found.