On a Tuscan island, an ancient fort becomes a dream retreat 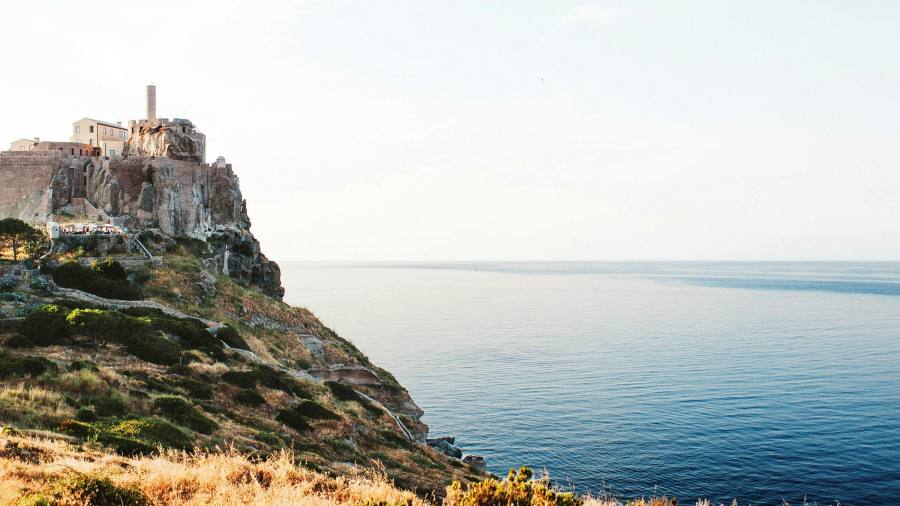 From the dock at Livorno, the slate-coloured sea looked menacing. Dark clouds were gathering and yet the locals filtering on to the rusty old Toremar ferry did not look remotely fazed. It was a grey autumn morning, and my family and I were bound for Capraia, a remote, wild island in the Tuscan archipelago, some 50km from the mainland.

As we set off on the lurching two-and-a-half hour crossing, we wondered to ourselves who our fellow ferry-goers might be. The ferry operates year-round, yet Capraia is one of the least populated of the seven islands, swelling to just 400 residents in peak season, and with just a brave handful remaining in the colder months. This of course is its appeal — 97 per cent of the island is undeveloped and uninhabited; off season, a visit to Capraia is, I was told by an Italian friend, a bit like visiting the Med pre-tourism.

Preserved as a national park and marine reserve since 1996, it is a paradise for serious sailors, divers and walkers alike. Accommodation is also scarce: with just a couple of hotels and scant self-catering options, it is most popular with day-trippers, and even then, it is happily just a bit too far for most. This summer, though, a fortunate few will have no need to rush for the last ferry and will instead be able to make themselves at home in one of the Mediterranean’s most remarkable retreats. The Forte San Giorgio, the island’s 16th-century fort, designated a National Monument of Architectural and Artistic Merit no less, has been restored, modernised and reopened as a private rental for up to 21 people, available through the luxury villa company, The Thinking Traveller.

Over the centuries, there was a need for fortification on this exposed volcanic island. Quite aside from the usual threat of pirates, marauders and warring rulers, there were some unsavoury characters on Capraia itself. From 1870 right up until 1986, Capraia served as a prison colony, as did nearby Elba (Napoleon’s exile outpost of choice) and Montecristo (the inspiration for Dumas’ great incarceration novel). As Capraia’s outline came into view through the sea mist, I shivered, imagining felons in chains arriving at their final destination. This was soon interrupted by our first tantalising glimpse of the fort and its ramparts, an unassailable edifice rising almost organically out of the sheer cliff face, dominating the coastline and towering splendidly over the tiny port.

Since its inception as a medieval stronghold, the fort has seen many surprising incarnations, from Pisan walled citadel complete with a church, to a garrison for the Genoese, a dormitory for a troupe of fascist youths in the 1920s and 1930s, a Nazi lookout post, a 1950s hotel and a happening 1970s disco, which some island residents still speak fondly of today. It was visited by Dr Johnson’s biographer James Boswell in the 1760s, and possibly even by Horatio Nelson, who in 1796 sent a British commander to the fort to raise the British flag, furious that French warships had been given safe harbour in the port. But despite its rich history, by the end of the 20th century Forte San Giorgio was in serious disrepair, crying out for investment.

Daniel Riva was just 17 when his Italian father Enzo made the family detour to Capraia, on the way back from a sailing trip to Corsica, to look at the large-scale renovation of the fort which he had been tipped off about. It was 2008, and the ancient building was being slowly transformed into luxury apartments. Enzo, a beauty industry entrepreneur, and his British wife Hilary, the former managing director of British high street fashion brands including Dorothy Perkins and Topshop and former chief executive of the British Fashion Council, were bowled over by the extraordinary setting and its potential, and decided to put their name down for a couple of the apartments.

A few years later, when the Rivas decided to take over the whole fort, the reality of the scale of the project, and the logistics of modernising this ancient pile of rock hit home. “There was a decade of painstaking renovation,” Daniel recalled. “With no materials on the island, everything had to be shipped, carried by hand up the numerous steep stairs. The crane had to be sawn in half to fit through the narrow cobbled streets, and then welded back together on site.” The renovation of the fort has dominated family life for well over a decade, explains Daniel, the director of Italian cosmetics company Villa Floriani, and now co-owner of the fort with his siblings and mother (his father died in 2011). Now that the herb garden is mature and the pandemic apparently waning, the fort is gearing up for its first proper rental summer.

On the empty quayside, we were met by Pasquale, a 28-year-old former coastguard who has lived on Capraia since the age of 18 and is now the fort’s maintenance manager, spear fisherman and boat skipper, with an encyclopedic knowledge of the flora, fauna and marine life on the island. After a short ride up the hill in his Land Rover, we stopped at the foot of the fort to look at some “palmenti”, trough-like ancient wine presses, before mounting the covered stone steps up to the courtyard entrance, where Giusy, the fort’s house manager, was ready to give us a welcome tour.

Maybe it was the early start, or the sea crossing, but as each room gave way to the next, leading from terrace to terrace, dizzying staircases descending and mounting between what seemed like endless different levels, I felt as if I had stepped into an Escher drawing. Sitting beside the 66ft-high watchtower was an infinity pool. Looking out from it over the expanse of indigo sea, flecked with the odd yacht sail, I felt closer to the sky than to the rocks below. A seagull perched poolside gave me a look as if to say, yup, this is my territory, not yours.

Over a restorative lunch of Parmigiana and salad, the layout of the fort coalesced in my mind. The whole walled complex, across several different wings, can sleep 21 — ideal for a multigenerational family reunion, where you might want to come together at the pool and for meals, but retreat to your own quarters to escape relatives or dissect family dynamics. With a subterranean TV snug and games room, there is something for kids of all ages. Ours quickly oriented themselves sufficiently to strip off and plunge into the pool nearest our rooms. They also soon discovered the honesty bar in a room next to the second, lower pool, where they could mix up their own fruity mocktails.

For grown-ups, there is a yoga studio, a shaded courtyard to escape to with a book and several communal sitting rooms. Bedrooms are large and airy, with vaulted ceilings, wooden or stone floors, and huge ensuites. The decor, a mix of Italian antique and mid-century modern pieces, thick shutters, crisp white linen and enormous oval baths, is pared back, drawing the eye outwards beyond the thick stone walls.

You’ve never slept well until you’ve slept in a fort, we decided over voluminous homemade croissants and excellent flat whites the next morning. The sun had burnt away the last of the cloud, and it was time to venture beyond the ramparts. There are virtually no beaches on Capraia — another tourist deterrent — but the sea, we discovered on a boat trip around the island, is snorkelling paradise. The south of the island is dominated by Zenobito, an ancient volcano whose eruptions several millennia ago left red gashes in the sides of the island, notably at the famous Cala Rossa. Here, we admired the livid brick-red rock before diving in for a leisurely pootle around shoals of sea bass, a handful of sea urchins and a seemingly lost lone jellyfish.

That evening, it was warm enough to eat under the stars. The chef brought out bowls of risotto, a platter of fish and for dessert, a slice of unctuous tarte Tatin. It was hard to imagine that any of the previous inhabitants of the fort ate and drank so well — and with so little to worry about, other than the odd mosquito.

Having explored the sea, the next afternoon it was time to venture up into the hills. Habitation on the island is confined to il porto (the port) and behind it, il paese (the village), as they are simply known. The paved road dries up soon after il paese, and the best way to experience the island’s interior is either on foot, or by bike, although the paths are strewn with tire-puncturing rocks. We wanted to take in as much of the 19 sq km island as possible in the last few hours of sunshine, so we saddled up on the fort’s powerful off-road electric mountain bikes, wobbling and bucking our way up the hillside, and occasionally coming a-cropper with roadside prickly pears as we got to grips with the power settings.

Soon, we were looking down even on the fort itself and whizzing past the ruins of a church, the rubble of the old prison, and a terraced vineyard — a micro winery that produces the excellent organic vermentino that we drank with dinner the previous evening. During the hour’s climb on crumbling paths, we didn’t pass a single person — just the odd rabbit and goat. Up at the island’s highest point, 445m above the sea, the air, scented with thyme, myrtle and lavender, was noticeably cooler. An osprey planed above us, looking down imperiously. Once again I had the distinct feeling he was politely telling us to get lost. Duly, we set off again down the mountainside, gingerly this time on the hairpin bends. The sun was sinking swiftly now, and the fort in the distance stood silhouetted and splendid in the early evening light.

Rebecca Rose was a guest of The Thinking Traveller (thethinkingtraveller.com). The price of renting Forte San Giorgio varies with occupancy, from £20,677 per week (sleeping 16) or from £25,650 per week (sleeping 21, full occupancy). Price includes daily housekeeping and private chef