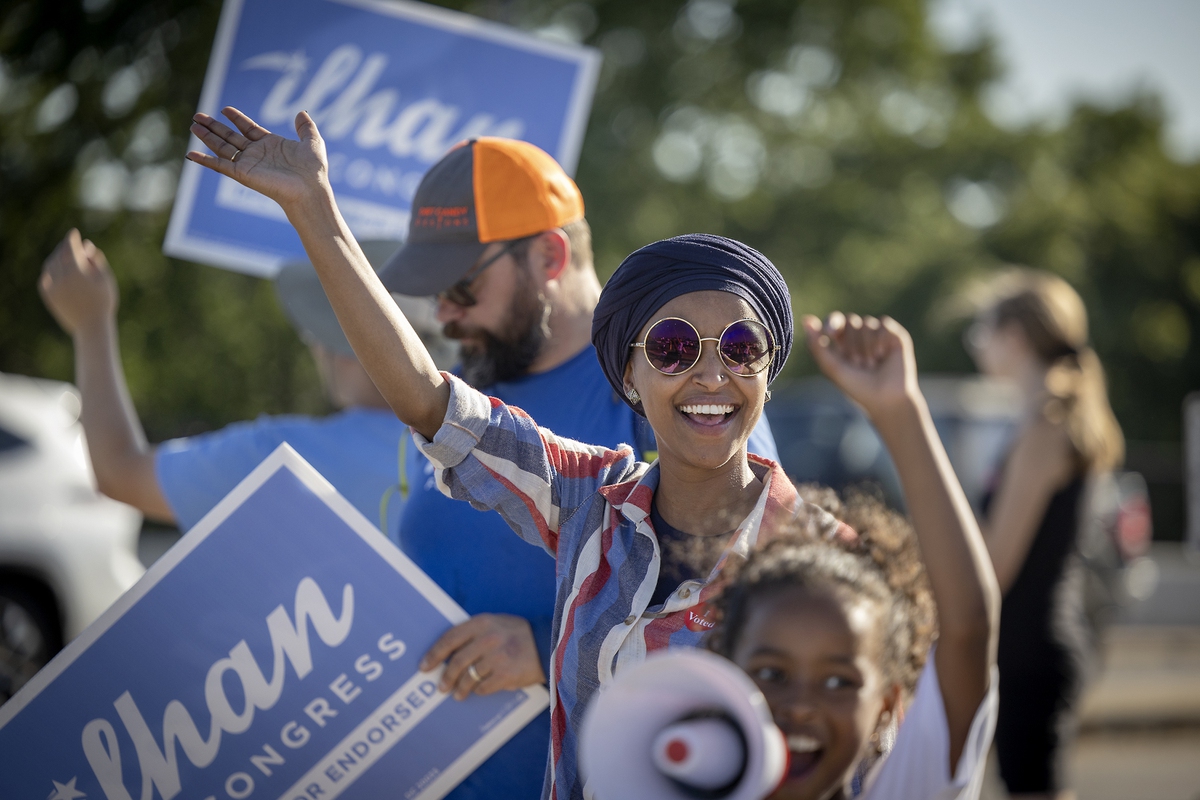 U.S. Rep. Ilhan Omar waves to passersby for support during a voter engagement event on the corner of Broadway and Central Avenues in Minneapolis, on Tuesday, Aug. 9, 2022. Omar faces a primary challenge from former city council member Don Samuels.

By Will Weissert, Associated Press

WASHINGTON — Minnesota Rep. Ilhan Omar, a member of the progressive Squad, eked out a closer-than-expected Democratic primary victory Tuesday against a centrist challenger who has questioned the incumbent’s support for the “defund the police” movement amid rising crime rates.

The evening went far smoother for another progressive, Becca Balint, who won the Democratic House primary in Vermont – positioning her to become the first woman representing the state in Congress.

A key race was also unfolding in western Wisconsin, where Democratic Rep. Ron Kind’s retirement after 26 years in office opens up a seat in a district that has been trending Republican. The Republican nominee in the race to replace Kind is a former Navy SEAL who attended the “Stop the Steal” rally in Washington on Jan. 6, 2021, which preceded the insurrection at the U.S. Capitol.

Some of the top elections:

Omar, who represents Minneapolis and is one of the left’s leading voices in Congress, has defended calls to redirect public safety funding more into community-based programs. A moderate Democrat whose north Minneapolis base suffers from more violent crime than other parts of the city, former Minneapolis City Councilmember Don Samuels seized on the issue in the primary.

Samuels, who had argued that Omar is divisive, helped defeat a ballot question last year that sought to replace the city police department with a new public safety unit. He and others also successfully sued the city to force it to meet minimum police staffing levels called for in Minneapolis’ charter.

Samuels said his narrow margin of defeat shows that Omar is beatable: “If this was the general election, no doubt that we would have won this race,” he told The Associated Press. Omar released a statement saying, “Tonight’s victory is a testament to how much our district believes in the collective values we are fighting for and how much they’re willing to do to help us overcome defeat.”

Barb Atkinson, a 53-year-old part-time event planner for a radio station who supported Samuels, called Omar “too far to the left.”

“Although I respect Ilhan Omar and what she’s done, I disagree with the defund the police. I really think that wording sends the wrong message,” Atkinson said. “We need our police. We need the police, and we need our leaders to work together to solve this issue. We don’t need it to be more divided.”

Omar, who is seeking her third term in the House, had crushed a similar primary challenge two years ago from a well-funded but lesser-known opponent.

“She’s had a lot of adversity already and pushback. I don’t think her work is done, and I think she has a lot to bring to the table,” said Kathy Ward, a 62-year-old property caretaker for an apartment building in Minneapolis who voted for Omar. “We’ve got to give her a chance.”

Two other members of the Squad — Rep. Rashida Tlaib of Michigan and Rep. Cori Bush of Missouri — won their Democratic primaries last week.

Voters in the 1st Congressional District in southern Minnesota were deciding two races related to the same seat vacated by Republican Rep. Jim Hagedorn’s death earlier this year from cancer.

A special election for the remainder of Hagedorn’s term pitted Republican Brad Finstad, who served in the U.S. Department of Agriculture during the Trump administration, against Democrat Jeff Ettinger, a former chief executive at Hormel Foods. Both won a May 24 special primary election for Hagedorn’s seat, and Tuesday’s winner will serve until January.

Finstad and Ettinger will also face off in November for a full term in the district — it includes Rochester and Mankato — after each secured their party’s nomination Tuesday.

Finstad had little trouble dispatching state Rep. Jeremy Munson, who said he doesn’t think President Joe Biden’s victory was legitimate — despite federal and state election officials, courts and Trump’s own attorney general saying there was no credible evidence the 2020 presidential election was tainted.

The district covers a swath of counties along Wisconsin’s western border with Minnesota and includes La Crosse and Eau Claire. Republican Derrick Van Orden is running unopposed in his primary Tuesday and has Trump’s endorsement.

Van Orden narrowly lost to Kind in the 2020 general election. He attended Trump’s “Stop the Steal” rally near the White House but has said he never stepped foot on the grounds of the Capitol during the insurrection.

Four Democrats are competing to succeed Kind, including state Sen. Brad Pfaff, who previously worked for the retiring lawmaker and briefly served as state agriculture secretary. Pfaff has Kind’s endorsement.

Vermont is the last state in the country to add a female member to its congressional delegation. Balint, who immediately becomes the favorite in November’s general election, would also be the first openly gay member of Congress from Vermont.

She was endorsed by some of the nation’s top leaders on the left, including Vermont Sen. Bernie Sanders, Massachusetts Sen. Elizabeth Warren and Rep. Pramila Jayapal, chair of the Congressional Progressive Caucus.

“Vermont has chosen a bold, progressive vision for the future, and I will be proud to represent us in Congress,” Balint said in a statement.

Balint is vying to fill the state’s lone House seat, which is being vacated by Rep. Peter Welch who is running for Senate and easily secured the Democratic nomination on Tuesday. Welch is trying to succeed Sen. Patrick Leahy, the Senate’s longest-serving member, who is retiring, creating Vermont’s first open Senate seat since 2006, when Sanders succeeded Jim Jeffords.

Gray is a former staffer for Welch and has been backed by Leahy and former Vermont Gov. Howard Dean – but it wasn’t enough. Balint’s win means the state’s congressional politics are poised to shift to the left and more closely adhere to Sanders’ progressive values. In November, she’ll face Liam Madden, a Marine Corps veteran from Bellows Falls who secured the Republican nomination.