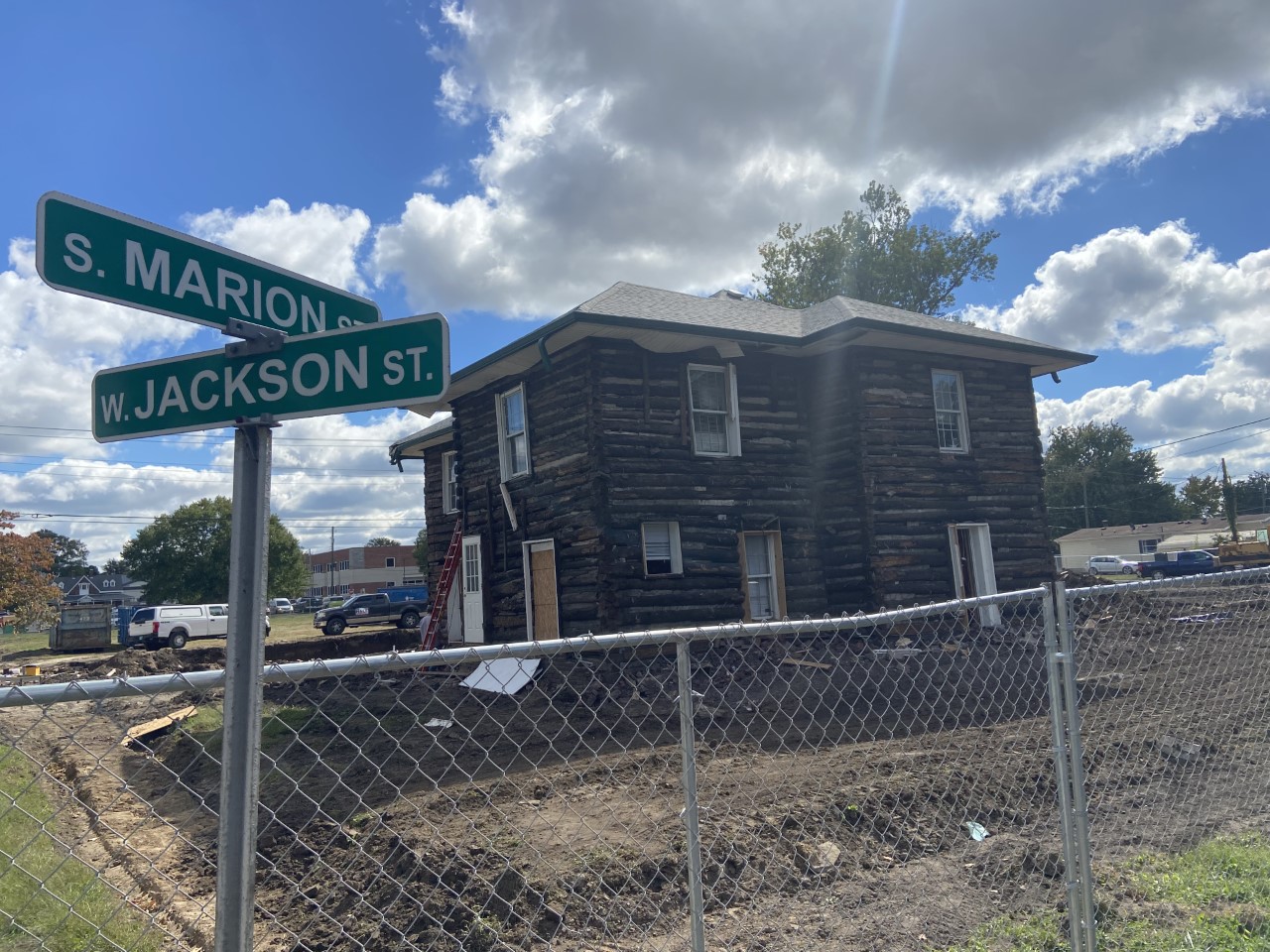 MARTINSVILLE, Ind. — While working toward the future of Martinsville, crews downtown found a piece of the past. A more than 100-year-old log cabin was hiding inside of what a majority of people thought was an old brick house.

The building in question is on the corner of S Marion St. and W Jackson St. in Martinsville. Construction crews are working on a new parking lot. Neighbors nearby said several houses have been torn down to make way for the lot. Crews took out the chimney on the log cabin and then began to find the log underneath.


Own your own campground: Former Boy Scout camp goes up for auction in Indiana

”People been coming out here all day taking pictures and videos,” said Randy Christie, a Martinsville man who said he grew up next to the cabin. “It’s like stepping back in time a little bit.”

The cabin is two stories tall and looks similar to a “Lincoln Logs” style house a child would build.

”I am in total awe of this thing, I don’t want to see it go for love or money,” Bill Davis said. Davis lives a little more than a block from the cabin.

Now the question on every neighbor’s mind is what will happen with the newly discovered piece of the past. The parking lot planned for the site goes along with a new expanded Morgan County Justice Center just a few blocks away.

Davis said a new justice center isn’t worth getting rid of the log cabin.

”I believe progress took way too much if they’re planning on taking this house.” he said.

He hopes the county can keep the cabin in its spot and become a historical marker for Martinsville.

”I think this house ought to stay right where it’s at and not move one piece,” Davis said. “Because they’re talking about taking it apart and moving it to a park right out of town.”

That is Morgan County Commissioner Kenny Hale’s plan – preserving the house but moving it somewhere else.

”It’s definitely very unique and we want to make sure we save the history of it,” Hale said.

The idea is to put a tag on each log so crews know exactly where each goes when they put it back together.

“Makes it so much easier when you put it back together,” Hale said.

Once each log is tagged and a map is built of where each one goes, workers will start to take the cabin apart piece by piece.

There is some debate on just how old the log cabin is. Hale said county historians did some research into early 20th century insurance fire maps.

But, he said the family who used to be the longtime owners think it could be much older.

”They really believe there was a cabin built in 1820 on this site,” Hale said. “I’m not saying there wasn’t, that’s for sure, there most likely was back then.”


Reese’s combines two of its own to create new candy

Hale said it’s likely there was a log cabin on this spot then but it might not have been this exact cabin.

Hale is a bit of a history buff himself and actually has experience putting log cabins back together. He said there are a few characteristics that make this cabin unique.

First, whoever built the house left the bark on the logs. Hale said that was a style choice back in the day.

”It was pretty appealing for people back in the early 20th century to leave the bark on,” Hale said. “These are poplar logs that have pretty much all the bark on them.”

The only problem is leaving the bark on keeps in moisture and leads to more bugs in the wood. Hale said you can see the impacts.

”This one has got some pretty bad rot to it, it’s just coming apart,” Hale said, pointing to one of the logs with cracks running all the way down.

Another interesting feature, the cabin isn’t just a square or rectangle.

”The other thing that is really unique about this is the bump outs,” Hale said. “Traditionally cabins don’t have bump outs.”

Inside the home, it’s been converted into apartment style. It looks like an ordinary, modern home until you start ripping up the walls and find logs on the other side.

There is even an older fireplace inside. Hale said he thinks it is original to the cabin.

”They did an awesome job, you just look at that fireplace,” he said. “There was some craftsmanship, just laying them bricks and everything in there.”

Hale said he wishes the county could keep the log cabin in the spot where it was built but the area is essential to the new parking lot and justice center.

”All the underground drainage is going right here on this corner of this block, so to be able to do that we would spend a lot more of the taxpayers’ dollars,” Hale said.

The new justice center will help consolidate several county buildings into one and Hale said more parking is already a major need.

”This parking lot is going to benefit more than just Morgan County government, but the downtown area because we are short on parking spaces,” he said.

Hale said by moving and rebuilding the cabin elsewhere, they’re balancing what the future of Morgan County needs while respecting where the county came from.

Hale said they’ll finish the tagging process later on Thursday and then crews will start taking the cabin apart. He expects to move all of the logs to another area sometime next week. Hale said there are still a few more steps before there can be an official new location for the cabin to be rebuilt.