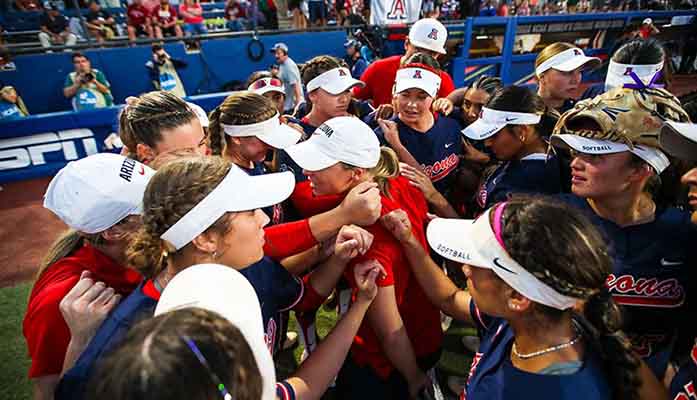 OKLAHOMA CITY – It all came down to one swing of the bat. For an Arizona Wildcats team that has hit at least one home run in each of its postseason games, it stung.

A three-run shot to straight-away center in the bottom of the sixth by Oklahoma State’s Karli Petty was the difference Thursday night in the Wildcats’ opening game of the Women’s College World Series.

“They capitalized on one pitch,” Arizona first-year coach Caitlin Lowe said after the 4-2 loss. “We’ve been living on that one pitch the entire postseason, and they had it tonight.”

It was a tough reversal of fortune. In six postseason games, home runs have accounted for almost two-thirds of Arizona’s runs. The Wildcats have hit 10 of their 96 homers during the postseason, an average of 1.6 per game, which ranks in the top 10 in the country.

On Thursday, Arizona’s two runs came off the bat of redshirt sophomore Sharlize Palacios, who belted a two-run homer to left in the fifth.

The blast was Palacios’ 20th home run of the season, tied for the 13th most in the country. It also gave the Wildcats a 2-1 lead.

“It was a really great feeling to be able to do that for my team and to get us ahead,” Palacios said.

But the Cowgirls turned the tables on the Wildcats and beat them at their own game with Petty’s shot.

“We played an amazing game, and it was one pitch that changed the difference,” Palacios said. “You take away that pitch and it was a different game. I think the great thing is that we’re an amazing team. We’re meshing when we need to mesh. Our pitchers are still doing amazing.

“There’s nothing lacking. That’s the way the games are when you get to the College World Series. There’s only eight teams left. It’s the best of the best, and that’s what’s going to happen.”

The Wildcats’ leadoff hitter reached base in five of the game’s seven innings, and the Wildcats left at least one stranded in each of those innings.

“Shar had (the big play) with her home run, and we put ourselves in good situations,” Lowe said. “We didn’t get the big hit when we needed to.”

In the seventh, Jasmine Perezchica’s leadoff single brought the top of the order to the plate as the game-tying run, but three consecutive strikeouts ended Arizona’s night. OSU’s Kelly Maxwell struck out 14. She has registered double digit strikeouts in four of the five games she has pitched during the NCAA Tournament and Women’s College World Series.

Arizona is set to face Pac-12 foe Oregon State in an elimination game Friday night at 6:30 p.m. Arizona time. The Wildcats dropped two of their three games against the Beavers in the regular season.