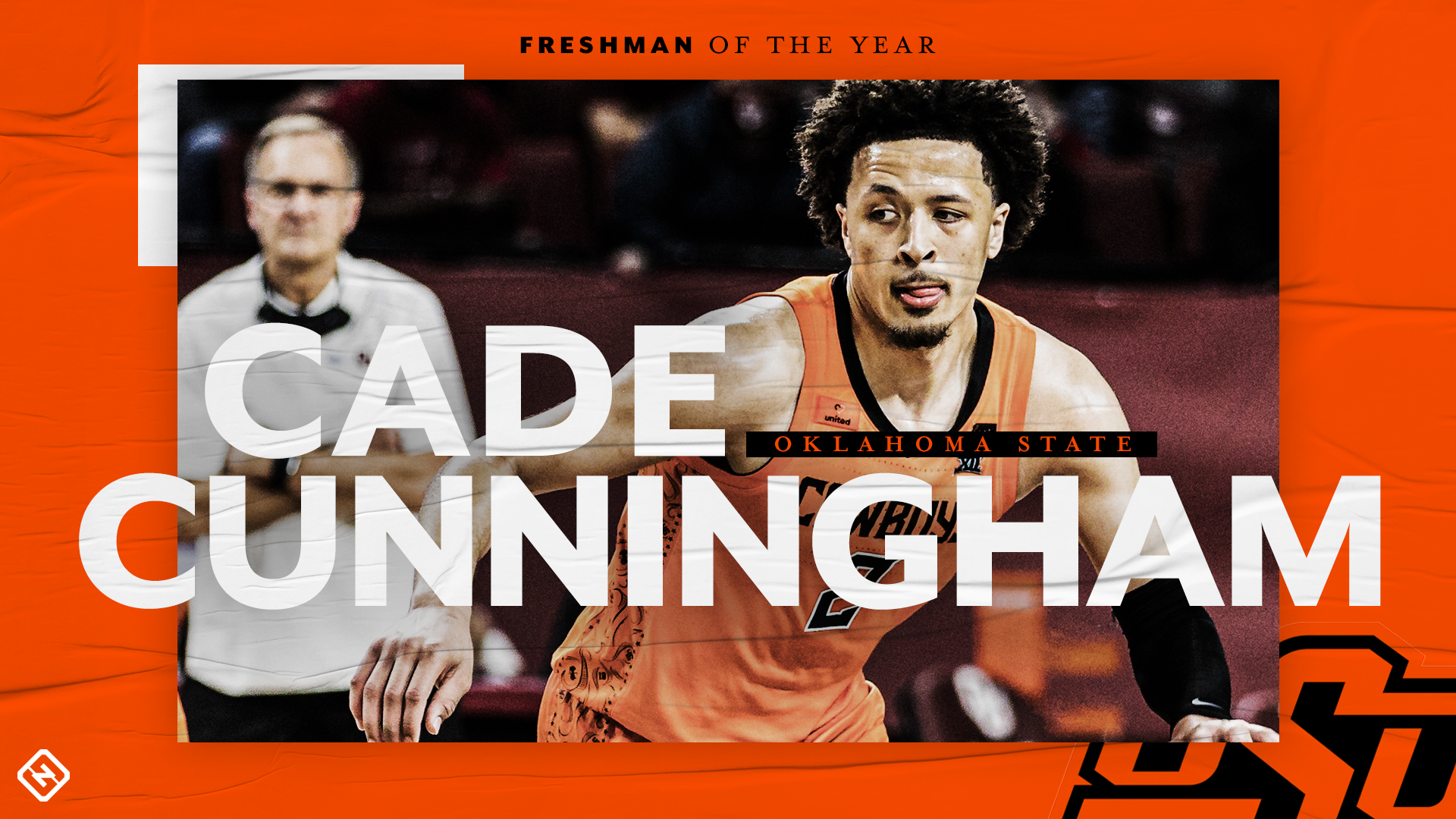 It would have been so easy to leave. When the NCAA infractions committee ruled last June that Oklahoma State would be ineligible for postseason competition in men’s basketball, the possibility of Cade Cunningham playing an entire regular season in the midst of a pandemic — and then not being permitted at least to enjoy a modified March Madness — was extremely real.

There was money to be made elsewhere, and no requirement to absorb punishment for others’ transgressions.

Cunningham stayed. It was the harder choice, but it was where he wanted to be. “Loyalty,” he explained in a video released on Twitter. “It’s standing by the people you started with. It’s showing up, even when the times are hard.”

MORE: Luka Garza is SN’s Player of the Year | Juwan Howard is SN’s Coach of the Year

The times are good now. His loyalty has been rewarded. Sporting News has chosen Cunningham as its Freshman of the Year, joining such past winners as Duke’s Zion Williamson in 2019 and Ohio State’s Jared Sullinger in 2011. He also has been named one of our five first-team All-America selections. On Monday, Cunningham became the fourth freshman ever chosen as the Big 12 Conference player of the year.

And here we are, five days removed from Selection Sunday; and, though it’s still not officially official that Cunningham and the Cowboys can play in the 2021 NCAA Tournament, the pending status of the appeal of that postseason ban means they are eligible. For now. It would be absurdly cruel for any segment of the NCAA’s power structure to remove Oklahoma State this close to the start of March Madness, which is why there is optimism we will get to the bracket reveal Sunday evening and see the 18-7 Cowboys prominently mentioned.

And so we all can hope to see Cunningham when the biggest college basketball games are played this season, for however long he can help OK State to last before departing for June’s NBA Draft.

One-and-done freshmen are not a universally popular entity in college basketball, which is odd, because they have added so much to our experience over the past 15 seasons.

Would the sport have been better this season without Cunningham’s 40-point masterpiece down the road at Oklahoma in late February? Would it have been better without his return two days later to lead the Cowboys to a Bedlam Series sweep with an entirely different episode of brilliance — this one featuring only 15 points but also seven rebounds and four assists?

For all the Twitter slander thrown against the elite freshman in recent years, 2021 became the 12th season since the NBA Draft age limit was introduced in 2007 to feature at least one first-year player on the Sporting News All-America first team. This time, it was Cunningham, who joined Iowa’s Luka Garza, Baylor’s Jared Butler, Gonzaga’s Corey Kispert and Illinois guard Ayo Dosunmu.

Cunningham belongs to a club that began with Kevin Durant of Texas in 2006-07 and most recently featured Zion Williamson of Duke in 2018-19. Cunningham did not deliver a season quite on par with either of theirs, but he was better than all but four of the roughly 4,100 players in Division I basketball this season.

Cunningham averages 19.7 points and 6.3 rebounds. As a point guard, he does not bring the surpassing vision to the position that such oversized playmakers as Penny Hardaway and Magic Johnson did. But he has a daring to his passes that can shred opposing defenses. And he may be a better pure shooter than either at the same stage (Cunningham is shooting 42.5 percent from 3-point range). He uses his size and length to disrupt as a defender.

I don’t know how many guys who are thought of as the number one pick would lay out for the ball in the first half of a game in February,” Oklahoma State coach Mike Boynton told the Tulsa World (Okla.) on Feb. 17. “Not to question any other kids’ motives, but there’s a risk involved there. What he does is he puts aside some of that risk. He’s all in to help this program.”