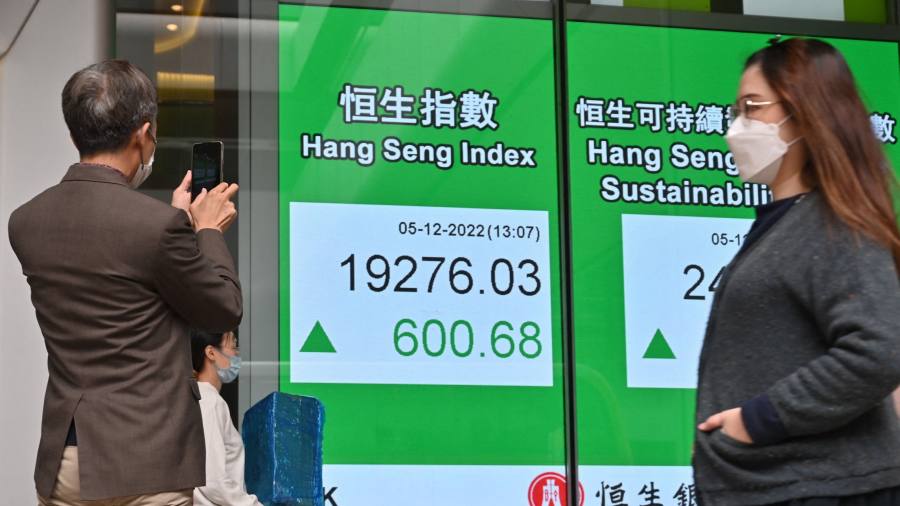 The price of crude oil rose on Monday ahead of the imposition of sweeping western sanctions on Russian oil, and as investors increased their bets that China would reopen to the world early next year after Beijing eased its growth-dampening zero-Covid policies.

Brent crude, the international benchmark, rose 2.4 per cent to $87.69 a barrel, though prices have fallen almost 30 per cent from around $120 since last peaking in early June.

The move in commodity markets came as Opec and its allies opted not to alter the group’s production targets in response to the EU’s move to bar seaborne Russian crude imports, which takes effect on Monday.

EU member states last week agreed a $60 price cap on other countries’ purchases of Russian oil in an attempt to limit profits for Moscow’s war on Ukraine.

“Oil markets will likely stay volatile in the near term,” warned analysts at UBS, with prices driven by Covid headlines in China and central bank policy announcements in the US and Europe next week.

Russian output is expected to fall “moderately” following the EU’s ban before dropping off again in February when western restrictions on the country’s refined petroleum products kick in, UBS added.

Reports that several cities across China had relaxed Covid-19 restrictions helped Asian equities rise, along with fuel prices. Hong Kong’s Hang Seng index finished 4.5 per cent higher and has risen more than 17 per cent in the past month, while China’s CSI 300 index added 2 per cent after several cities across the country relaxed antivirus measures.

Top movers in the latter included China Railway Group and infrastructure group China Communications Construction, both of which gained more than 10 per cent.

The dollar fell almost 1 per cent against the renminbi to Rmb6.955 per dollar, its lowest level since September.

“Investor confidence in China-related assets and currencies is being boosted by reopening optimism,” said MUFG currency analyst Lee Hardman, who added that the dollar remained “vulnerable” to further weakening even after slipping more than 8 per cent from its late September high.

China reported 31,824 infections on Sunday for tests taken the previous day — a slight decline from Saturday, but close to record highs. “A surge in Covid cases as China reopens still has the potential to cause disruption for the economy and dampen activity in the near-term,” Hardman warned.

China has been rocked by widespread demonstrations in recent weeks, with people taking to the streets in protest against President Xi Jinping’s draconian measures to slow the spread of Covid-19.

Xi appears to have acquiesced, with cities including Shenzhen and Shanghai having scrapped the requirement for commuters to present PCR test results to travel on public transport, following similar moves by Tianjin, Chengdu and Chongqing. Signs that the world’s second-biggest economy is moving into a new phase in its fight against Covid have encouraged some investors to pile into Chinese assets that would benefit from a reopening.

Others had retreated at the same time, however. Uncertainty over China’s Covid policies and “the difficult economic backdrop contributed to risk-averse behaviour by investors”, noted analysts at Goldman Sachs, who called the pullback “excessive” and remain optimistic that investors should be positioning for a reopening in April.

Elsewhere in equity markets, Europe’s regional Stoxx 600 fell 0.3 per cent after data out on Monday showed a 1.8 per cent fall in eurozone retail turnover in October — the biggest monthly fall of the year. London’s FTSE 100 rose 0.3 per cent.

US equities have marched steadily higher over the past fortnight on hopes that the Federal Reserve would slow its interest rate rises in December. However, contracts tracking Wall Street’s benchmark S&P 500 fell 0.4 per cent on Monday, while those tracking the tech-heavy Nasdaq 100 lost 0.3 per cent.

At least some of that reversal is probably down to a US jobs report out on Friday, which showed strong continuing demand for workers. Non-farm payrolls rose by 263,000 in November, compared with an expected 200,000, according to data released by the Bureau of Labor Statistics.