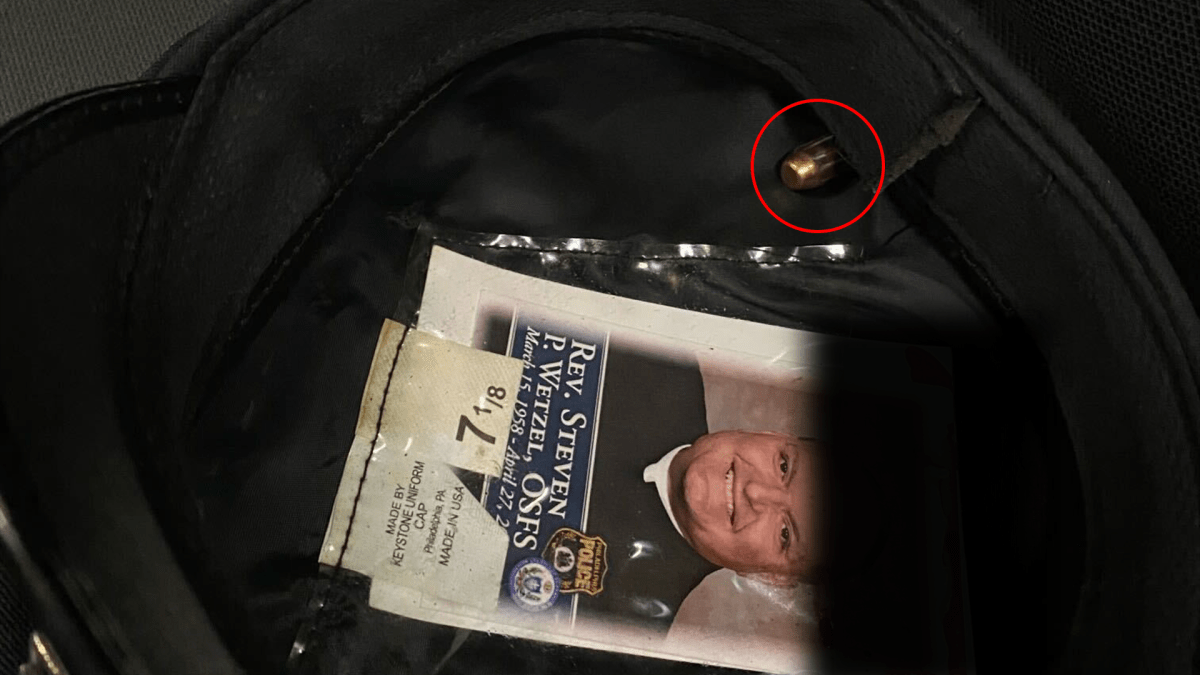 Two police officers were shot near Philadelphia’s Benjamin Franklin Parkway as thousands attended a Fourth of July concert and fireworks show Monday night, leading to crowds scattering from the scene.

One officer sustained a graze wound to the head and the other a gunshot wound to the right shoulder, Philadelphia Police Department Commissioner Danielle Outlaw said just after midnight Tuesday. Both were treated and released from Thomas Jefferson University Hospital, she said.

A photo supplied to NBC10 by John McNesby, president of the Fraternal Order of Police Lodge No. 5 union, showed a bullet lodged in an officer’s cap. Inside the cap was a memorial card for a Philadelphia police chaplain who recently died.

“It is miraculous the fact that the round stopped in his hat,” Outlaw said.

The officer grazed in the head is a 36-year-old PPD highway patrol officer and the other is a 44-year-old Montgomery County Sheriffs’ deputy, the commissioner said. Both were part of the security detail for the festival, she said.

The gunman was not immediately arrested or identified. It was unclear if the officers were targeted or if they were struck during “celebratory gunfire” amid Fourth of July festivities, Outlaw said.

“The good news is that both officers have since been treated and released, and what really could have been a chaotic scene or a catastrophic scene wasn’t today,” she said.

The gunfire broke out around 9:47 p.m. near the Philadelphia Museum of Art during the finale of the 16-day Wawa Welcome America festival as throngs of people watched a fireworks show following a concert headlined by Jason Derulo on the parkway, police said.

The shots hit the officers along the 2500 block of Spring Garden Street, behind where the concert took place, Outlaw said. Various people could be seen running from the area. Police instructed people in surrounding buildings to shelter in place.

NBC10 had various reporters in the area covering the festival.

NBC10’s Leah Uko was conducting an interview when people began running away from shots fired during a July Fourth celebration.

NBC10 reporter Leah Uko reported a “stampede” of people running toward the concert stage. Uko was interviewing a group of teens when an NBC10 cameraman captured the moments people, including various visibly distressed children, began screaming and scattering.

She said she helped three people onto the stage and they took cover behind a DJ podium. A man speaking with the director of the show then instructed them to stay there until it was safe enough to “rush back” to their vehicles, Uko said.

NBC10’s Tim Furlong said he saw a “wave of people” running from near Eakins Oval down the parkway. Several children were crying during what were moments of confusion from the crowd and police officers at the scene, Furlong said.

Fellow reporter Karen Hua reported laying in the dirt inside a tent with other people.

“We made a fort around us with catering equipment. Everyone is crying or screaming,” Hua tweeted. “It has just been a night of absolute horror and terror,” Hua said later.

Mayor Jim Kenney lamented what he said was people’s easy access to guns. He laid the blame on the Republican-controlled state legislature, which prevents Philadelphia from enacting stricter gun control measures, as well as the U.S. Congress, which only recently was able to pass some moderate gun control laws following a spate of mass shootings throughout the country.

He also criticized the gun culture in the U.S.

“We are the most armed country in world history and we’re one of the least safest. So, until Americans decide that they want to give up the guns and give up the opportunity to get guns, we’re going to have this problem,” he said.

Two officers were shot during Wawa Welcome America’s Party on the Parkway Monday night, police said. As the fireworks went off, thousands scrambled, including NBC10’s Karen Hua who details, from her own perspective, the terror that took over in Center City.

The shooting occurred the same day that a gunman opened fire on a Fourth of July parade in the Chicago suburb of Highland Park, killing six and wounding dozens more before being taken into custody.