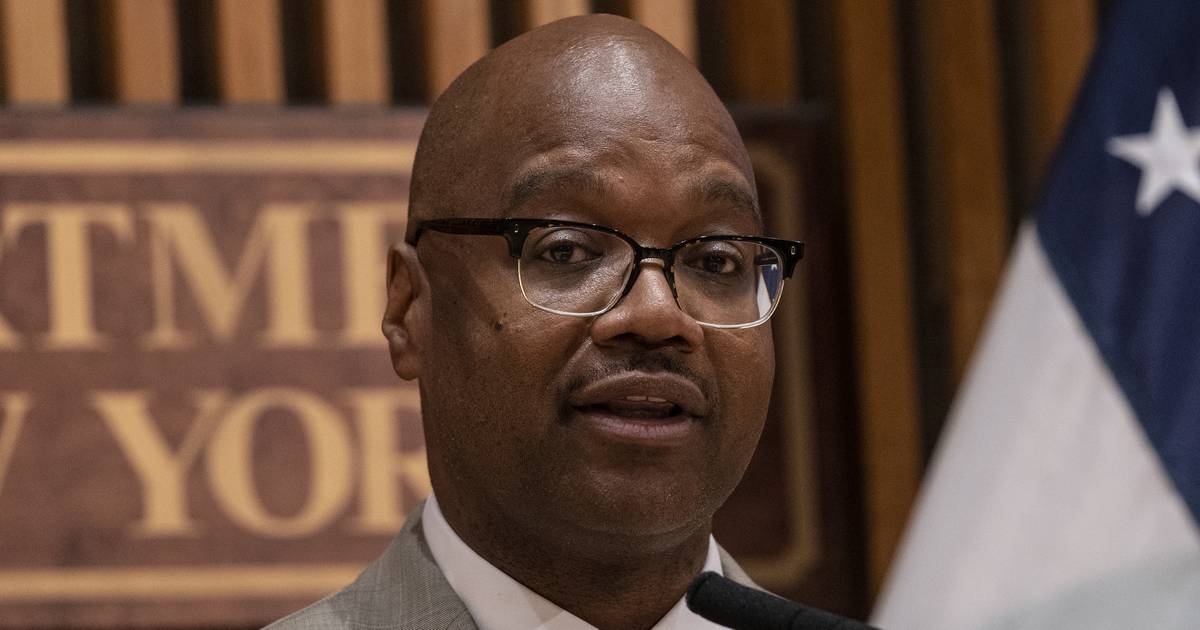 Gary Jenkins, Mayor Adams’ Social Services commissioner, pushed back Thursday against allegations that he withheld information about overcrowding conditions in city homeless shelters and also denied that his former spokeswoman was fired for blowing the whistle on the alleged coverup.

Marking his first public comments since coming under a Department of Investigation probe over the matter, Jenkins said in an interview with CBS2 that “it’s false” to suggest he was trying to hide the fact that his agency broke a city law by failing to shelter four Latin American families in a timely manner in the early morning hours of July 19.

[ NYC plans to rent another 5,000 hotel rooms to house migrants amid shelter crisis ]

“That is a false allegation. Within an hour, I let (the mayor’s office) know that we had four families at PATH that were not placed by 4 a.m.,” Jenkins said, using an acronym for a Bronx intake center where the four families ended up having to sleep on the floor that night. “My personality and my work ethic is not to hide anything.”

In a remarkable twist, Jenkins’ agency admitted minutes after the interview aired that it had discovered that a fifth migrant family was not placed by the Right to Shelter 4 a.m. deadline on July 19. A department spokeswoman said the agency pin-pointed the latest violation as part of an “ongoing” and “thorough reassessment” of records from the evening of July 18 and the morning of July 19.

The lid on the legal violations at the Bronx intake center blew off when Julia Savel, the Social Services Department’s former top spokeswoman, was fired Aug 5.

Before her axing, sources said Savel had raised concerns to a City Hall staffer about Jenkins allegedly instructing her and other Social Services officials to not inform Adams’ office or the public about the fact that the Right to Shelter law had been broken.

Those revelations spurred speculation that Savel’s termination was an act of retaliation, and the Department of Investigation began probing Jenkins shortly thereafter, sources directly familiar with the matter have confirmed.

In his Thursday interview, Jenkins rejected the premise that Savel’s canning was retaliation.

“There’s documented instances where she was unprofessional with her peers, with her subordinates and with senior management,” Jenkins said. He did not elaborate on Savel’s alleged misconduct.

In a text message to the Daily News after the interview, Savel said she was directed by Jenkins on July 20 to issue a “false statement” to the press claiming the city was in full compliance with the Right to Shelter law.

“The moment I refused … was the moment when I was excluded and the active coverup began,” she said.

The ex-spokeswoman also poured cold water on Jenkins’ allegation that she engaged in misconduct on the job.

“My performance was never in question, I never was alerted to any documented instances of misconduct, and I worked tirelessly on behalf of the most vulnerable New Yorkers,” she said.

Savel’s termination letter, a copy of which was obtained by The News, does not list a reason for her firing.

The overcrowding crisis playing out in the shelter system is driven by thousands of Latin American migrants arriving in the city after crossing the U.S. southern border in hopes of applying for asylum.

In a joint statement late Thursday, the Legal Aid Society and the Coalition for the Homeless commended the Social Services Department for being forthcoming about the fifth violation, but also raised concern about continuing low vacancy rates in the shelter system. On Wednesday, that rate was 0.18%, the groups said.

“Without increasing the vacancy rate, there is a risk the City will run out of available beds, and we will see further violations,” they said.