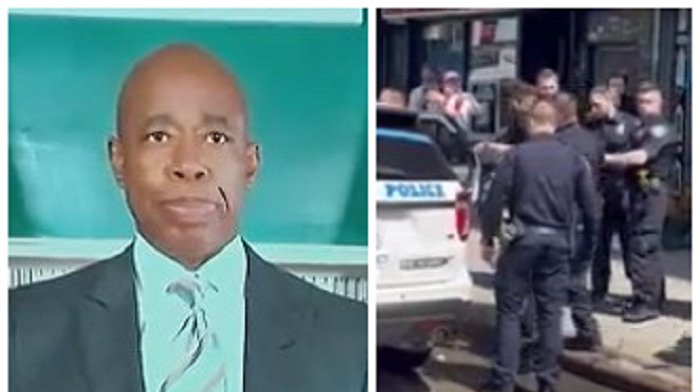 New York City Mayor Eric Adams was on the receiving end of a fair share of criticism after seemingly taking partial credit for the capture of Brooklyn subway gunman Frank James, even as it is being reported that James had to call the police on himself.

“My fellow New Yorkers,” Adams said at a press conference Wednesday. “We got him.”

New York City Police Commissioner Keechant Sewell tried to get in on the action, claiming the NYPD left James “nowhere to hide” and “shrank his world.”

Adams would also add, “I want to thank every day New Yorkers who called in tips, responded, helped wounded passengers.”

But James seemingly wasn’t hiding all that effectively, evading authorities despite wandering around the city for 30 hours after the attack, and only being apprehended reportedly after calling a police tip line on himself.

According to reports, James dropped a smoke canister inside a crowded New York City subway car during rush hour on Tuesday morning, then opened fire causing mayhem and panic.

His attack injured 29 people, 10 from gunshot wounds, and five critically according to authorities.

Following his arrest on Wednesday, James was hit with a federal terrorism offense.

James has been reported to be on the FBI’s terrorist watch list in New Mexico until 2019, but was cleared after “multiple interviews.”

The FBI though denies those reports.

#FrankJames has been charged with committing terrorist and other violent attacks against mass transit systems. FBI just said he was not on their radar – they never investigated him, rejected “inaccurate” reports of some New Mexico contact. https://t.co/QMpu9xyHgQ

Still, his social media rantings should have raised alarm bells repeatedly with authorities. Perhaps had they not spent the past year trying to find Capitol ‘insurrectionists’ they could have focused their energy on an actual terrorist in the making.

For weeks prior to the shooting, James posted ominous videos on YouTube about race and shootings, and he announced he was leaving Wisconsin and “will never be back again alive.”

Two days before the shooting he posted a video with this chilling statement: “This is what white b*****s and white m*********ers’ expect you to be… when you blow one of their f*****g brains out – this is what you asked for. This is how you wanted me to be, obviously.”

James Reportedly Called Cops on Himself

As for Adams’ comments about “New Yorkers who called in tips,” Frank James appears to have been one of them himself.

The Brooklyn subway terrorist called a Crime Stoppers tip line himself immediately before being arrested Wednesday, according to NBC New York report.

In fact, police sources said they believe James called the tip line himself, saying he was at a McDonald’s on the Lower East Side.

“This is Frank. You guys are looking for me … my phone is about to die,” the sources say the caller said.

James wasn’t at the McDonald’s by the time cops responded to the call, but they drove around and eventually spotted him on a street corner. He didn’t resist.

“This is Frank. You guys are looking for me…my phone is about to die,” the sources say the caller said. https://t.co/UvSvKzPhs0

A man identified as Zack Tahhan has also been credited for spotting the gunman.

“I thought, ‘Oh my God, this is the guy, we need to get him,’” Tahhan told reporters. “He was walking down the street, I see the police car. I said, ‘Yo, this is the guy,’ and we catch him, thank God.”

Twitter users were quick to tell Adams that Tahhan was more responsible for apprehending James than he was.

You should be thanking Zack, he found the guy not your detectives. Dude was riding the subway while over 3000 of your guys were standing around looking at their phones

Thank god for Zack, who spotted the guy TWO BLOCKS FROM MY APARTMENT and 5 blocks from the 9th Precinct. NYPD should be thankful for this man – I sure am – not taking credit for what he (and all the New Yorkers at the scene yesterday) did to ensure this tragedy wasn’t worse https://t.co/Cp3lS9Sv6f

It’s an utter embarrassment that the FBI failed to track down James until a random guy named Zack and the gunman himself provided them tips.

It’s even more of an embarrassment that Adams is taking credit.