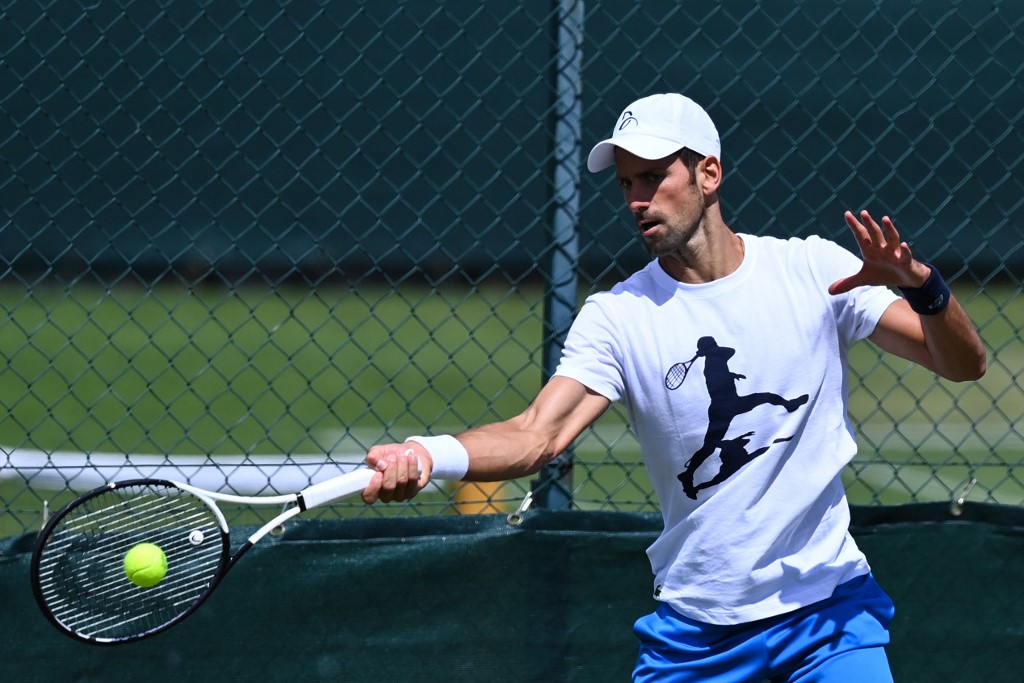 Serbia’s Novak Djokovic returns the ball during a training session during the 2022 Wimbledon Championships at The All England Tennis Club in Wimbledon, southwest London, on June 26, 2022. (Photo by Glyn KIRK / AFP)

Djokovic has extra motivation this year as Wimbledon will be his last Slam of 2022.

His continued refusal to get vaccinated means he will remain banned from entering the United States for the US Open later this summer.

Also adding fuel to the Djokovic fire is the chance to win a fourth successive Wimbledon title and join a select group.

In the Open era, only Bjorn Borg, Sampras and Roger Federer have managed to complete such a streak of dominance at the All England Club.

“As a seven, eight-year-old boy I’ve dreamt of winning Wimbledon and becoming number one,” said Djokovic.

“Pete Sampras winning his first Wimbledon was the first tennis match I ever saw on the TV.”

Murray, the Wimbledon champion in 2013 and 2016, is unseeded this year but remains a dangerous floater in the draw.

He made the Stuttgart grass-court final earlier this month before an abdominal injury forced him out of Queen’s.

“I think he’s one of the most dangerous players on grass still,” said Australia’s Nick Kyrgios.

“I definitely think the way he can handle speed, return, compete, slice, volley, as long as his body is feeling well, I don’t want to see him on the grass at all.”

Murray takes on Australia’s 77th-ranked James Duckworth who has yet to register a win on the main tour in 2022.

However, the 30-year-old did make the third round at Wimbledon in 2021.

Duckworth’s career had been undermined by requiring nine surgeries in the last decade.

Raducanu, the shock 2021 US Open champion, plays Wimbledon for the first time as a Grand Slam winner.

She made the fourth round last year but has been plagued by inconsistent form since her triumph in New York.

The 19-year-old has been battling a side strain but insisted she is “ready to go” on opening day against 46th-ranked Alison van Uytvanck.

The Belgian player made the last 16 four years ago.

Also in action on the first day of the 2022 tournament is French Open runner-up and third seed Casper Ruud.

Ruud has lost in the first round on his two appearances at the tournament.

He was also defeated in his only grass-court outing this summer by world number 180 Ryan Peniston at Queen’s.

Women’s second seed Anett Kontaveit tackles Bernarda Pera of the United States as the Estonian looks to reach the second week of Wimbledon for the first time.

Despite her lofty ranking of two in the world, the 26-year-old Kontaveit has a mediocre record at the Slams making the quarter-finals just once in 28 appearances.

These Best-Selling Revox Beauty Serums Are Under $10 Each