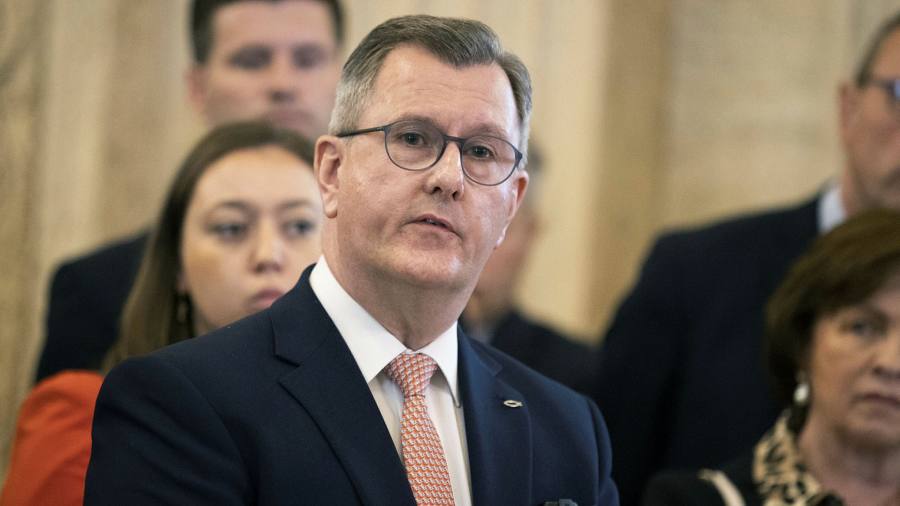 Sir Jeffrey Donaldson is gambling the future of his Democratic Unionist party on a battle of wills with the British government over post-Brexit trading relations with Northern Ireland, say critics.

Donaldson was humbled in the region’s May 5 elections when the nationalist Sinn Féin pushed his long-dominant party into second place and supporters defected in droves to the harder-line Traditional Unionist Voice.

He is now trying to woo back voters by securing changes to post-Brexit trading arrangements, paralysing regional institutions until London scraps a customs border in the Irish Sea that unionists say undermines their place in the UK and treats them as foreigners in their own country.

But it is a high-stakes gambit. “If he gets this wrong, he will come down and the DUP will probably implode,” said Alex Kane, former director of communications for the rival Ulster Unionist Party.

The UK announced plans this week to secure changes from the EU to the Northern Ireland protocol, which governs post-Brexit trading arrangements, or table legislation to unilaterally rip up parts of the deal.

But the government’s calculation that this pledge would be enough for the DUP to re-enter Stormont backfired as Donaldson demanded “action not words”.

“The focus has to be on getting an outcome that can garner support within unionism,” said a DUP spokesperson. “For the last two and half years, unionists have been ringing a bell to say ‘we are not happy’. No one . . . was listening — they kept saying ‘no renegotiation’.”

Donaldson’s acquiescence on returning to Stormont now hinges on Boris Johnson and his government delivering on their pledge to change the protocol, potentially risking a trade war with the EU.

The DUP fears a repeat of 2020, when the prime minister promised that there would be an Irish Sea border “over my dead body”. “It’s bluff and counter-bluff,” said Kane.

As Sam McBride, Northern Ireland editor of the Belfast Telegraph, told a seminar this week: “If they do go back into government and they are betrayed by Boris Johnson, I think it’s potentially . . . the end of the DUP as a serious force”.

The DUP lost nearly 7 per cent of its vote share in the May vote, mostly to the TUV, whose firebrand leader Jim Allister said the “mendacious prime minister that we have” had a stark choice: the protocol or Northern Irish institutions.

Donaldson’s Stormont boycott opens the prospect of six months of political limbo and another possible election this winter. The parties have 24 weeks to establish a power-sharing executive and, if they fail, the UK secretary of state for Northern Ireland would have to call elections within 12 weeks.

Donaldson is calculating that his tough stance with London could win back those who defected to the TUV.

“The focus has to be on getting an outcome that can garner support within unionism and restore unionist support for power-sharing,” the spokesperson said.

But Jon Tonge, professor of politics at Liverpool University, said new elections would be “mad” for the party. “I don’t see how they [the DUP] are going to make any advances. And they could get so much opprobrium from the electorate that their vote could go down further,” he added.

The mild-mannered 59 year-old Donaldson lacks the thundering style of the late Rev. Ian Paisley, the DUP founder whose side Donaldson joined in 2003. Nevertheless, in talks with Johnson in Northern Ireland this week, he was clear that the DUP would stand firm on the protocol.

“As our prime minister . . . it’s his job to protect Northern Ireland. We have a right to trade freely,” Donaldson said.

But passage of the promised legislation could take months and approval by the House of Lords is far from assured. One senior DUP insider conceded that the party should “not overstate its leverage”.

If Donaldson has nothing concrete to offer disaffected DUP voters “it will look like he either has no influence or he’s been shafted again by the government,” Kane said.

Donaldson has indicated he could take a phased approach to returning to Stormont — which analysts said could mean allowing the election of a speaker if he got concessions from London, allowing the Assembly to function in a limited way.

But Jim McAuley, professor of political sociology and Irish studies at the University of Huddersfield, said: “They’ve painted themselves into a corner and there’s no easy way to get out of it. If Donaldson doesn’t succeed in what he’s doing, he’s toast.”