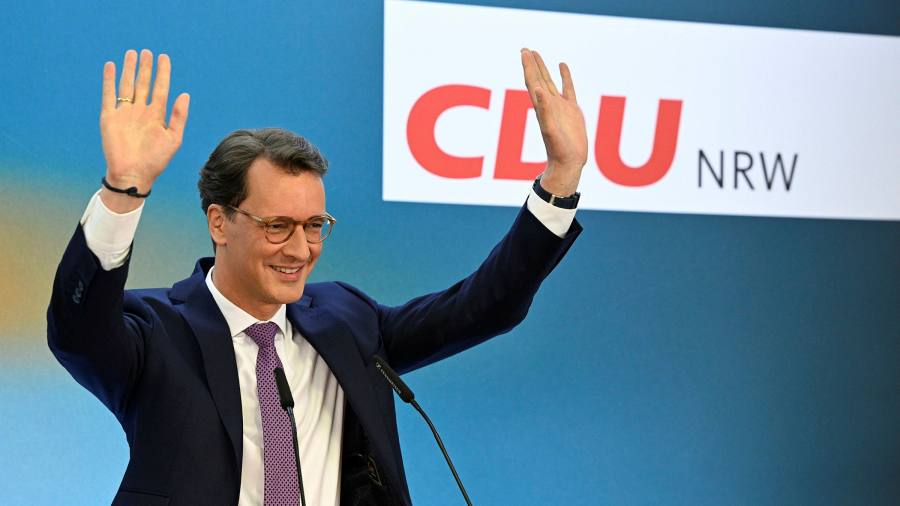 German chancellor Olaf Scholz suffered a major setback on Sunday when his Social Democrats slumped to their worst-ever electoral result in North Rhine-Westphalia, Germany’s most populous state and once an SPD stronghold.

Projections on Germany’s ARD TV channel based on exit polls put the SPD on 27.1 per cent, down more than 4 points on the last election in 2017.

The two big winners were the opposition Christian Democrats (CDU), who won with 35.9 per cent, up nearly 3 points on 2017, and the Greens, whose share of the vote tripled to 18.1 per cent. It is the Greens’ best ever result in the state.

North Rhine-Westphalia is currently governed by the CDU in a coalition with the liberal Free Democrats (FDP), but the two parties will probably no longer command a majority in the regional parliament. The CDU is now widely expected to govern instead with the Greens.

According to projections, such a “black-green” coalition would control 117 of the regional parliament’s 199 seats.

The result is bad news for Olaf Scholz, whose poll ratings have declined in recent weeks amid mounting criticism of his policies on the war in Ukraine.

He has been accused of being too restrained in his public support for the authorities in Kyiv and being slow to supply heavy weapons to Ukraine, at a time when it is facing a big Russian offensive in the east of the country.

North Rhine-Westphalia is one of Germany’s largest states and an important bellwether for the whole of the country. Sunday’s election was seen as a litmus test for Scholz and his government, an unprecedented three-way tie-up between the SPD, FDP and Greens.

The chancellor had campaigned hard for the Social Democrats in North Rhine-Westphalia and appeared with the party’s leading candidate Thomas Kutschaty on hundreds of electoral posters across the state.

The birthplace of German heavy industry, North Rhine-Westphalia is home to 18mn people and would be Europe’s sixth-largest economy if it were an independent country.

It was long seen as the “beating heart” of the German Social Democratic movement, but the SPD’s hold on the state weakened as traditional smokestack industries went into decline and the coal mines of the Ruhr valley shut down.

Sunday’s election was a big victory for Hendrik Wüst, the Christian Democrat state premier, who only assumed the role last October and will now be seen as one of the rising stars in Germany’s main opposition party.

The lawyer succeeded Armin Laschet, who stood down as CDU leader and North Rhine-Westphalia’s prime minister after last year’s Bundestag election when the party fell to the worst result in its postwar history.

“Voters have given us the job to form and to lead [North Rhine-Westphalia’s] future government,” Wüst told cheering supporters on Sunday evening, calling the result a “clear vote of confidence” in the CDU.

The strong vote for the CDU came a week after the party scored a decisive victory in another regional election, in the northern state of Schleswig-Holstein.

For the SPD, the one consolation was that the CDU-FDP coalition that has governed since 2017 lacks the votes to form a majority. “Black-yellow [the party colours for CDU and FDP] has no majority in North Rhine-Westphalia,” Kutschaty told supporters.

The SPD has also not given up hope of forming a government in the state. “Most people in North Rhine-Westphalia want a red-green government — all the polls show that,” said SPD chair Lars Klingbeil.