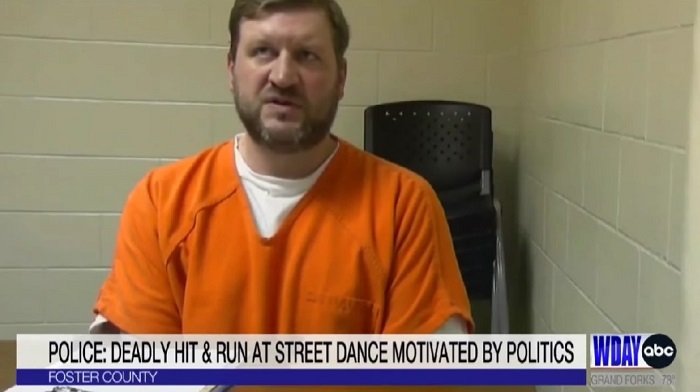 Editor’s note: This article and headline have been updated with the latest legal proceedings in the case.

A North Dakota man has been charged with vehicular homicide and leaving the scene of a deadly accident after striking and killing a teenager in what prosecutors are calling a politically motivated attack.

Ellingson had called his mother to come to his aid as Brandt was chasing him after the street dance had ended.

Court papers, according to the Grand Forks Herald, indicate the suspect was the one who alerted authorities through a 911 call that he had struck the teenager.

The Herald reports that Brandt claimed Ellingson “was part of a Republican extremist group and was calling people to come get Brandt after a political argument.”

Details of the confrontation are still being sorted out, as authorities indicate Brandt knew the North Dakota teenager’s mother and was drunk at the time of the incident.

“We do not know of any witnesses. We are still making attempts to interview potential witnesses from the street dance, people that were present prior to the crash happening,” North Dakota Highway Patrol Capt. Bryan Niewind told reporters.

But Brandt’s own 911 call allegedly defines the victim as a “Republican extremist.”

The court papers, according to the Herald, indicate it was a “politically motivated attack.”

He was run over for being a Republican pic.twitter.com/ss39I1YzYj

Brandt is set to appear in court on October 11th and would face a minimum of 10 years in prison because of a DUI on his record, with the charges possibly netting him a 20-year sentence.

“claiming the teen was part of a Republican extremist group” https://t.co/SRP0SUvaaC

***UPDATE: Suspect Shannon Brandt has already been freed from jail, despite admitting to running over Ellingson with his vehicle. Fox reports that Brandt posted a $50,000 bond and was released from Stutsman County Jail.

While there is no defined outside link with the case of the North Dakota teenager being killed by someone accusing them of being part of a “Republican extremist group,” the incident comes amidst divisive rhetoric from a White House that has repeatedly cast Republicans in the same light.

President Biden delivered a speech earlier this month in which he vilified “MAGA Republicans” as extremists and a “threat to this country” while he spoke from a set bathed in blood red lighting, in front of a backdrop of Marines.

“Too much of what’s happening in our country today is not normal. Donald Trump and the MAGA Republicans represent an extremism that threatens the very foundations of our republic,” President Biden says. pic.twitter.com/J8De3JKJgr

The Political Insider’s Becky Noble reported his ‘MAGA extremists’ speech backfired with new polling indicating Americans are more concerned about what is happening to the country due to left-wing socialists.

Brandt, however, was clearly more concerned with the Republican threat, according to court documents, and the suggestion that the North Dakota teenager was calling people to help engage in political violence.