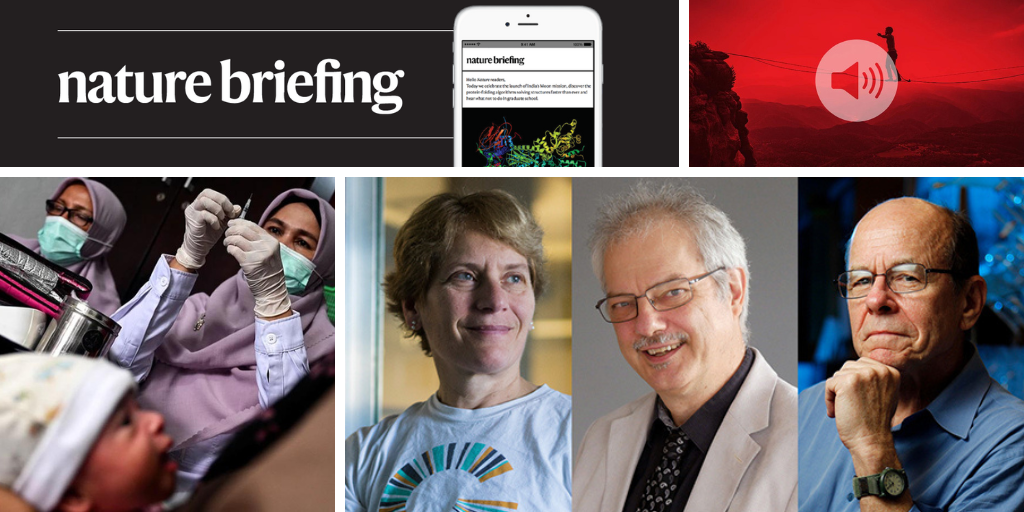 Three chemists who pioneered ‘click chemistry,’ a technique for efficiently joining molecules together, have won this year’s Nobel Prize in Chemistry. Barry Sharpless and Morten Meldal laid the foundation for click chemistry and independently discovered a pivotal reaction that could be used to link two molecules — an azide and an alkyne — with relative ease. This is the second Nobel prize for Sharpless, who won a chemistry Nobel in 2001 for developing chiral catalysts. Carolyn Bertozzi used click chemistry to map living cells without disturbing their function. To do this, she developed new types of click reaction that do not require copper catalysis, called ‘bioorthogonal’ reactions.

The Global Fund to Fight AIDS, Tuberculosis and Malaria, the world’s largest fund to detect and treat these diseases, has secured US$14.25 billion in pledges for 2023–25 — almost $4 billion short of an $18-billion target. The United States is by far the biggest donor to the Global Fund, and many nations have upped their commitments from the last funding cycle. However, the United Kingdom — previously the third largest donor — and Italy have not announced their contributions. The shortfall comes amid growing concern that the world’s total disease burden has increased during the COVID-19 pandemic.

A tiny fish that helped to define how species are protected in the United States is officially off the list of endangered wildlife. The snail darter (Percina tanasi) held up construction of a dam in Tennessee for more than two years in a case that went all the way to the US Supreme Court. In 1978, the court ruled in favour of protections for the fish’s habitat and halted work on the nearly completed dam. The victory set a powerful precedent, but it was short lived: US lawmakers later exempted the project from the law to allow it to be completed. Conservationists kept the species going by transplanting populations into other areas and pressuring the dam-building authority to make their projects less environmentally damaging.

India has lost communications with its Mars orbiter, nicknamed Mangalyaan, thus ending the mission. The orbiter has spent eight years circling the red planet, far exceeding its planned six to ten months. The exact cause of the loss isn’t known, but the craft might have run out of propellant. Mangalyaan, which arrived at Mars in 2014, was India’s first mission to another planet, and had several instruments on board, including an ultraviolet spectrometer and a sensor to detect methane. A successor is currently being planned.

Microbial life represents the majority of Earth’s biodiversity, note the ten authors of a call to defend Earth’s microbiome. This invisible menagerie has a fundamental role in supporting life on the planet, and must be protected and maintained. “When we restore ecosystems, for example by planting trees, we rarely think to ‘plant’ the associated microbiome,” they write. But their survey of 80 studies finds that ‘microbiome transplants’ can boost plant growth by an average of 64% compared with plant-restoration methods that neglect microbes. The authors put forth a system of mapping and monitoring to understand Earth’s microbial diversity. And they suggest conservation methods that can work in harmony with agriculture and forestry “to build reservoirs, rather than deserts, of microbial life across our planet”.

Achieving work–life balance is an almost impossible mission at the mid-career stage, say scientists in the third episode of Muddle of the Middle, a six-part Working Scientist podcast series about the mid-career level in science. Instead, aim to keep periods of imbalance short, focus on the most fulfilling parts of your personal life and use data to analyse which overwhelming tasks you can give up.

Infographic of the week

As Brazil’s presidential election heads into a second round, scientists are assessing the impact of President Jair Bolsonaro on science, health and the environment. Data from Brazil’s National Institute for Space Research (INPE) show that deforestation in the Brazilian Amazon has surged since the start of 2019, coinciding with the start of Bolsonaro’s presidency. Last year, it reached its highest level since 2008. Critics of the government blame its lax enforcement of environmental laws. (Nature | 6 min read)

Physicist John Clauser was caught on camera getting ‘the call’ from the Nobel Prize committee — and told them his career-defining experiments were done for fun using abandoned equipment cobbled together from storerooms in his physics department. (Associated Press | 4 min read)

Gaia Vince on how climate change will shape where people live