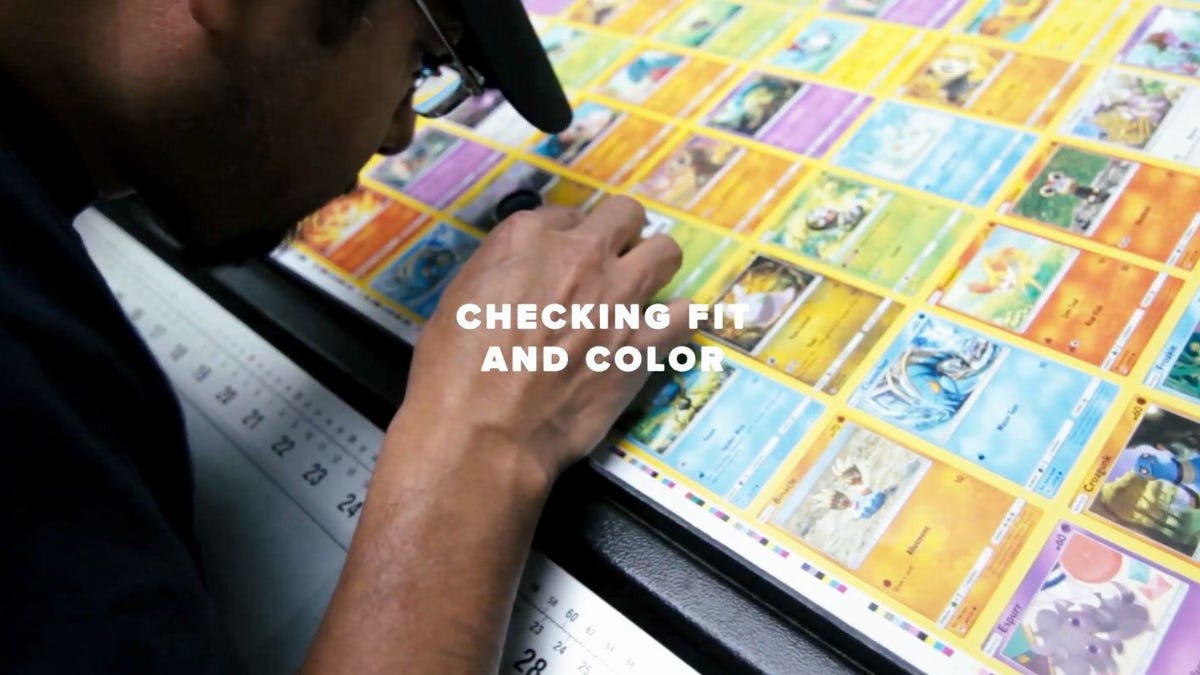 Pokémon TCG fansite PokéBeach has secured quite the find. It’s an internal video from The Pokémon Company that shows, in never-before-seen detail, exactly how a Western Pokémon card is created, from their initial design to proofing and printing. And if you love those factory shots of items getting mass produced, you’re in for a treat.

How Pokemon Cards are Made: from Start to Finish

This internal video was apparently created for employees at both The Pokémon Company International, and Millennium Print Group—the card manufacturer The Pokémon Company announced its intention to purchase earlier this year. My guess is it was filmed around 2017, given the sets featured throughout are Sun & Moon’s Ultra Prism and Forbidden Light. In the film, the company details the process of how a new set of Pokémon cards is created, from the text lists of names and moves sent to them by the Japanese card makers, all the way to the physical packs in people’s hands.

There’s something kind of extraordinary about seeing the blank cards on a computer screen, with their attributes being typed in, right onto the card. It feels like something that should only be possible by a wizard who lives in a volcano, rather than a diligent team forensically checking each card for mistakes on their monitors. But it only gets more impressive as the video goes on.

Those textured cards (always the easiest giveaway for crappy fakes) are so elaborately complicated to create! Every ripple and line appears to be meticulously laid out on computer, matching the direction and pattern to specific sections of each Pokémon’s body, and then as they spread out into the rest of the card.

There’s just so much detail in here, and such insight into how a set gets translated and constructed for the English-speaking markets. There are countless versions of the Ultra Prism logo design scrolled through, seen from its original sketched phase to the final packaging. You can see how many people are involved in every single step, different voices chiming in on messages asking for tiny tweaks, or how a particular design can receive OKs from most, but still get rejected by one department. Above you can see a possible list of rejected names before “Ultra Prism” was decided upon, although it does look heavily staged for the shot. Still, we can all lament we never saw Ultra Galactic.

Then comes the printing, and oh boy it’s so satisfying to watch. Not just the impossibly huge sheets of the rarest cards being fed into giant chopping machines, but the intricacy with which they are checked at ever stage. They even have a special little metal stick for measuring the borders on the cards. (Surely something anyone who’s lost out on a grade 10 due to “centering” can only become enraged at.)

It even goes into details about the TCGO code cards, and how those QR codes are checked. But sadly doesn’t get into why the hell they reveal whether a pack will contain a good pull or not.

Sadly, the one thing it doesn’t give away is how the selection of cards that enters a booster pack is done. It does show the giant machines that do the job, but there’s no explanation of how it all works.

There are a ton of fun numbers, too. TCPi’s production facilities in Durham, NC, produce 26.62 million cards per day, on a 120-foot-long printing press that cost $8.5 million. Meanwhile, 2.5 million packages are produced a day to put them in. And a good job too, given there are 10 per pack.

Oh, and we must not forget the full-on Raiders of the Lost Ark vibes of the warehouse where the packed cards are stored. Every single one of those larger boxes contains (by my observation) 72 packs of six booster boxes. The camera pans to reveal this is just half the warehouse. By guesstimating, I’m seeing around 2,000 of those larger boxes. At around $140 a booster box, we’re looking at $120 million of Pokémon cards. Yikes. Who else has an idea for a heist movie?

What a fantastic insight, and let’s hope Nintendo and The Pokémon Company have the sense to realize it’s one well-worth being left online to promote their product.