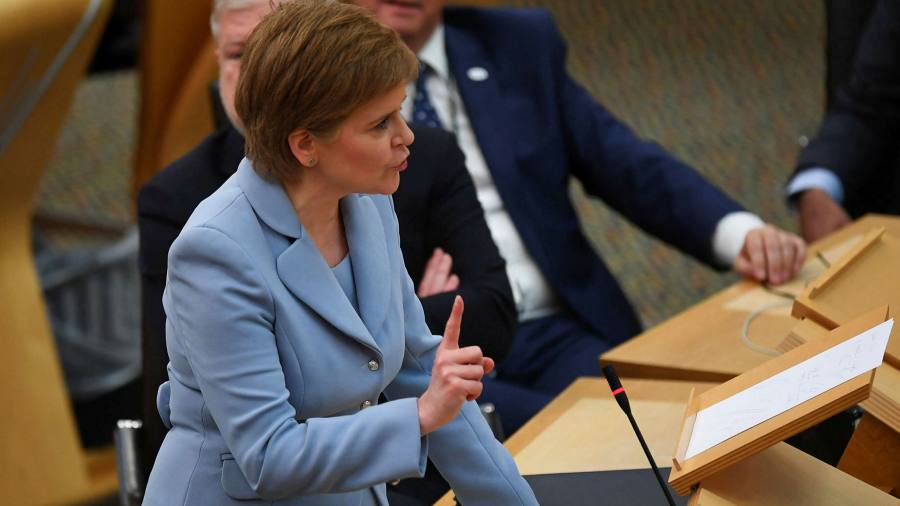 Scotland’s first minister Nicola Sturgeon on Tuesday outlined plans to hold an independence referendum on October 19 2023, as she sought to find a way around Boris Johnson’s refusal to authorise a vote.

Sturgeon said her senior legal officer had agreed to refer legislation for a “consultative” referendum to the UK Supreme Court, to establish if it was within her government’s authority to hold such a vote.

If the court disagreed, Sturgeon said the UK general election expected in 2024 would become a de facto vote on whether Scots should have a referendum.

Sturgeon’s Scottish National party won last year’s elections to the Scottish parliament on a pledge to hold an independence referendum. With the Scottish Greens, who also favour a vote, the SNP government has a majority in the parliament.

Sturgeon’s preferred date of October 19 2023 would come just over nine years after Scots rejected independence in a referendum by 55 per cent to 45 per cent.

The 2014 vote was made possible after the then Conservative prime minister David Cameron agreed to issue a so-called section 30 order authorising the Scottish government to hold the referendum.

Johnson’s refusal to approve another referendum has forced Sturgeon to look for a way to bypass his Tory government’s opposition while organising a legal vote.

In a letter to the UK prime minister, Sturgeon said it was with “deep regret” that she had to turn to the courts for legal clarity in the face of Westminster’s refusal to recognise Scotland’s right to an independence referendum.

“In a voluntary union of nations where the people of one nation have voted in elections to give a mandate for a referendum, it is, in my view, unacceptable democratically that the route to a referendum has to be via the courts,” she wrote.

Opposition parties said Sturgeon was out of touch with Scotland’s voters, adding people were concerned about the cost of living crisis, education and health.

Anas Sarwar, leader of Scottish Labour, said Sturgeon’s statement was about the “SNP having some relevance” in the 2024 UK general election.

Douglas Ross, leader of the Scottish Conservatives, suggested his party would boycott a new referendum.

He said his party would not participate “in a pretend poll when there’s real work to be done”.

Ciaran Martin, a former civil servant who led the Cameron government’s negotiating team during the 2014 vote, said he was not sure there was “a great deal of legal meaning” to the pledge to hold a “consultative” referendum.

He added the language was probably designed to give the Scottish government’s legislation the “maximum chance” of legal success.