Nicholas Bostic rescued 5 kids from fire, one by leaping out a window 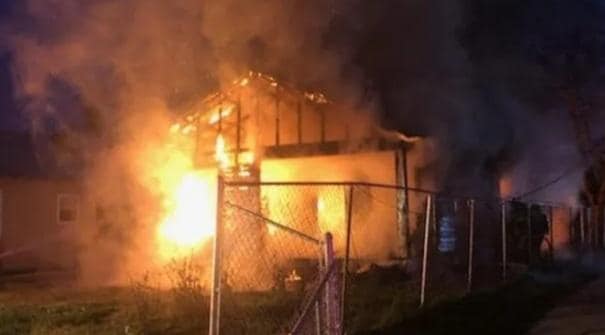 Nicholas Bostic was on his way to get gas one night last week around midnight when he saw flames leaping from the front of a two-story house in Lafayette, Ind.

He slammed on his brakes, turned his car around and pulled into the driveway. Then he realized he’d left his phone at his home a few miles away and couldn’t dial 911.

Bostic, 25, jumped out of his car and tried to flag down another driver, but the person didn’t stop. He wasn’t sure whether anyone was in the home, so he ran to the back of the house, found an unlocked door and rushed inside. All he saw was smoke.

“I shouted, ‘Anybody here? Get out! Get out! Fire!’ ” he said, recalling that he felt his eyes and nostrils stinging from the smoke in the early morning of July 10.

He didn’t hear a response, and he was about to leave, he said. Then he saw a teenager at the top of the stairs with some younger kids.

Seionna Barrett, 18, was babysitting her three siblings and her sister’s friend while their parents were out on a date night playing darts. Seionna had smelled smoke and was frantically trying to wake up everyone to get them out of the house when Bostic busted through the back door.

Bostic said he hustled everyone outside — then Seionna told him the baby was missing. Bostic would soon learn she was referring to 6-year-old Kaylani, nicknamed “Baby K,” who was still in the burning house.

“I ran inside and looked under beds and closets, but I couldn’t find her,” he said. “But when I got to the stairs that led downstairs, I heard some faint crying.”

The staircase was full of smoke, and the heat seemed unbearable, he said, adding that he hesitated for a moment before plunging down the stairs.

But he held his breath and followed the crying in the darkness until he reached Kaylani and quickly scooped her up.

“I rolled her up in my arm like a football, then felt my way back up the stairs,” Bostic said. “It was extremely hot and smoky, and it was painful to breathe. The only light I could see was coming from the rooms upstairs. So I headed up there.”

He broke open a window with his right fist, tightly wrapped the girl around his left side and leaped two stories to the ground, landing on his right side, sparing the girl from the force of his fall, he said.

Bostic had saved five lives in under 15 minutes.

“His selflessness during this incident is inspiring,” said Lt. Randy Sherer of the Lafayette Police Department.

One roommate is 85, the other is 27. Such arrangements are growing.

Bostic — who works as a pizza maker for Papa John’s — is bashful about praise and told Sherer he was just an ordinary guy, he said.

“What he doesn’t understand is his actions weren’t ordinary, they were extraordinary,” Sherer said. “He went down those stairs to save that little girl when he thought it was impossible just moments before. He knew he was risking his life. There’s only one way to define that: courageous and heroic.”

David and Tiera Barrett had rushed home from their darts game as soon as Seionna called to tell them that the house was on fire.

They arrived to find their home engulfed in flames and “Baby K” in an ambulance with minor injuries. Bostic was also being sent by ambulance to a hospital to be treated for smoke inhalation and first-degree burns on his buttocks, right ankle and right arm.

Firefighters had arrived on the scene after a neighbor called 911.

By the time firefighters arrived, Seionna; Shaylee, 13; Kaleia, 1, and Shaylee’s friend, Livian Knifley, 13, were safely out of the house. They were shaken but otherwise unharmed, said David Barrett, 39.

Out walking her dogs, she found an Olympic gold medal on the ground

“We feel very blessed for what Nick did,” Barrett said. “He’s a real hero, and my daughter’s a real hero for waking the kids up. I don’t like to think about what might have happened if Nick hadn’t shown up. I’m grateful beyond words.”

Barrett said he works as an assistant principal at Tecumseh Junior High School in Lafayette and he and his wife had rented their home for about six years. The Lafayette Fire Department is still investigating the cause of the fire, but officials say it may have started on the front porch, he said.

“It’s scary how fast it spread — we lost everything,” Barrett said, explaining that all his physical possessions were ruined.

Barrett said when he returned to the house the next day, the “Love” plaque on the family’s living room wall had not been touched by the fire.

“It was like a sign,” he said. “Everything had been burned down and all that remained was love. The love shown by Nick and the community has been great.”

A teacher at his school who is on vacation offered her house for the family to use until they can find a new place, Barrett said. And residents of Lafayette rallied to raise money for the Barrett family, including scheduling a bowling tournament, a band festival and a silent auction to help replace their belongings.

Their dad was drowning. They saved him using CPR they saw in movie scenes.

Valerie Holdman also set up a Facebook fundraiser for Bostic to help pay for his three-day hospital stay and other medical bills. Her niece was on a sleepover at the house that night. More than $35,000 has been donated so far. A separate GoFundMe for Bostic has raised more than $220,000

“I get chills when I think of what could have happened,” Holdman said. “A couple of more minutes, and they might not have made it. Helping with Nick’s medical bills is the least we can do.”

“When I met Nick, I cried for what must have been five minutes,” said Livian’s grandmother, Faith Holdman Bohannon. “He truly is our hero.”

Bostic said he appreciates the help from the community.

“The last thing on my mind at the time was the medical bills, but yeah, going to the hospital is expensive,” he said. “I’m really grateful that everyone has been so kind and giving. But more than anything, I’m grateful those kids are still here.”

On July 17, he met the family formally for the first time after David Barrett invited him to attend church services with them, Bostic said.

“It was a nervous moment and also tear-jerking,” Bostic said. “I was just trying to do what was right that night, and to know they’re all okay, I just wanted to cry.”

“Nick is far more than a friend to us,” he said. “He’s now officially a part of our family.”

This story has been updated to reflect an additional campaign to raise money for Nicholas Bostic.