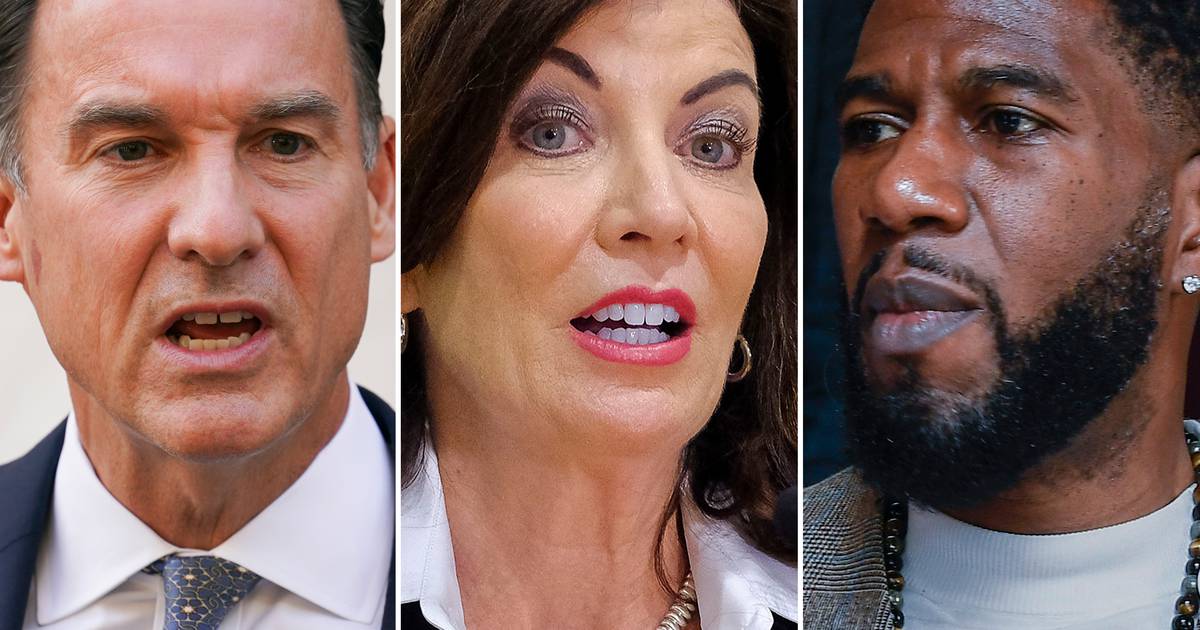 ALBANY — Gov. Hochul sailed to victory Tuesday as she easily defeated a pair of Democratic primary opponents and took a step closer to becoming the first woman elected governor of New York.

The incumbent Democrat beat out Rep. Tom Suozzi (D-N.Y.) and Jumaane Williams, the city public advocate, in a contest that saw extraordinarily low turnout. The Associated Press called the race at 9:25 p.m.

“My friends, it has been the highest honor of my life to serve as your governor for the past 10 months,” Hochul, dressed in white in a nod to suffragists, told supporters at a Manhattan celebration late Tuesday.

The 63-year-old is the first woman to win a major party nomination for governor in New York.

She will now square off against Rep. Lee Zeldin (R-N.Y.), the Republican gubernatorial nominee, in November’s general election as she seeks a full four-year term in Albany. Democrats outnumber Republicans by a 2-to-1 margin in the Empire State.

“There’s so much more to do. We’re just getting started,” she promised. “We cannot and will not let right-wing extremists set us back in the decades of progress.”

Hochul’s path to primary victory wasn’t initially clear. Cuomo, who stepped down in the wake of sexual harassment allegations, clouded the race early on as he attempted to clear his name and rumors swirled that he would seek his old seat.

During her short tenure in office, Hochul has faced several challenges and crises including the ongoing COVID crisis and the resignation and arrest of Brian Benjamin, her hand-picked lieutenant governor.

Benjamin was indicted on federal corruption charges in April. Hochul claimed she was blindsided by the scandal despite numerous ethical questions raised prior to his appointment.

During budget negotiations, the Buffalo native tried to play nice with the Dem-led Legislature but faced criticism as her 11th hour bail reform plan was leaked to the press and a taxpayer-funded deal to build a new stadium for the Buffalo Bills was announced days before the state’s spending plan was due.

Still, donors inundated Hochul’s campaign coffers with contributions as she out-raised Suozzi and Williams by tens-of-millions of dollars and shored up endorsements from major labor unions early in the race.

Suozzi painted himself as a “common sense” Democrat, running as a moderate with executive experience as a former town mayor and county executive before joining Congress.

He focused on bail overhauls and rising crime while slamming Hochul over past endorsements from gun lobby groups and promising to lower taxes and cost-of-living.

Suozzi said he called Hochul to congratulate her around 9:45 p.m.

“We lost the campaign, but we brought an important message about crime, affordability, our troubled schools and the corruption in New York,” he tweeted.

Williams ran to Hochul’s left. He was endorsed by the Working Families Party and ran on a progressive-friendly platform that centered around housing, police reform and health care.

Hochul maintained front-runner status for much of the campaign as polling showed her clearly leading her rivals by wide margins.

She maintained a relatively low profile as a candidate. Instead, she focused her energy on the day-to-day duties of the governor’s office, which afforded her plenty of press coverage as she tackled COVID spikes, responded to storms and signed bills on gun control and abortion protections passed at the end of the legislative session earlier this month.

Late in the race, Hochul received a boost as Mayor Adams announced his support for the sitting governor despite only getting a few items on his Albany wish list, including speed cameras and an extension of mayoral control of schools, accomplished.

Benjamin’s resignation in March initially left Hochul without a running mate as the primary approached.

Some maneuvering by the Legislature allowed Benjamin to step down from the ballot and Hochul named former Hudson Valley congressman Antonio Delgado as her new lieutenant governor.

Lieutenant governors are elected separately from gubernatorial candidates in New York primaries. The top vote-getters for each post then run together as a ticket in the general election in November.