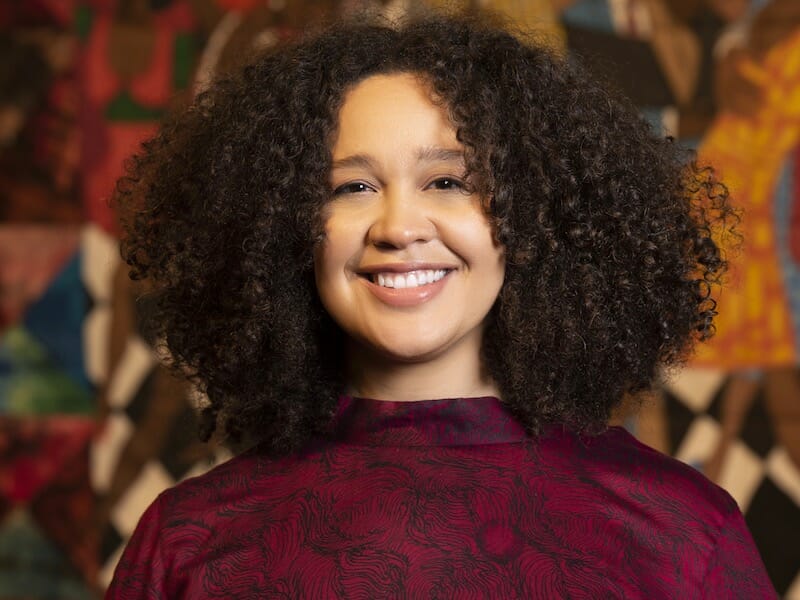 Dr. Liz Andrews, executive director of Spelman College Museum of Fine Art, strolls through the gallery as she describes how she wants guests to feel once the space reopens to the general public on August 26.

“Museums can feel very cold or very formal,” says Andrews, who served as executive administrator in the director’s office of the Los Angeles County Museum of Art prior to relocating to Atlanta last summer. “More than anything, I want people to feel at home. I want them to feel this is a warm space where they belong, see themselves reflected in the art on the walls and in the stories they convey.”

With the debut of Lava Thomas: Homecoming, Andrews will get to fulfill her mission and invite visitors to reconsider the history of a subset of female activists she calls “everyday people who were also heroes.”

The exhibition, organized by the Montgomery Museum of Fine Arts with guest curator Bridget R. Cooks, features 13 life-size pencil drawings by Thomas, based on mug shots of women who were arrested for participating in the 1955-‘56 Montgomery bus boycott. The photographs, taken in harsh light, were intended to document, demean and criminalize each subject. But under Thomas’ gaze, details of facial expressions, hair texture, skin and clothing animate the women by illuminating their individuality, humanity and courage. The point, says the artist, “[is] to call attention to the fragility of this history, the ease with which it can be erased if it isn’t adamantly preserved.”

While the Mugshot Portraits are an homage to women’s labor as crucial to the success of the civil rights movement, the site-specific installation of four large-scale drawings, Looking Back, will transform the gallery into a meditative space. Based on photographs belonging to Thomas’ grandmother, the multimedia collection will offer museumgoers a chance to count the ways in which they have been the beneficiaries of their foremothers’ sacrifices. The exhibition will be supplemented by an interactive component — including videos and audio testimonials — in which descendants of the women depicted share personal insights and perspectives on the portraits.

As a scholar and administrator, Andrews is interested in representation and memorialization, and the battlegrounds upon which cultural values are visualized in politics, popular culture and the arts. Her focus on the intersection of art and social justice comes honestly as the daughter of a prominent civil-rights attorney, Irving P. Andrews.

The first Black graduate of Colorado College and University of Denver Law School (Class of 1950), the elder Andrews worked on the Brown v. Board of Education team; corresponded with Thurgood Marshall; and was president of the NAACP Western Conference for many years, including during the March on Washington in 1963.

Ironically, Andrews did not follow in her father’s footsteps because he dissuaded her from becoming a lawyer. By the same token, she wound up doing her father’s work as an advocate for justice in the art world instead of the courtroom.

Andrews comes by her appreciation for the arts as a result of her parents’ influence. The Colorado native recalls family trips to the Denver Art Museum and exposure to live performances as a child that put her on a trajectory which culminated in a Bachelor of Arts from Wesleyan University (American Studies), a Masters from the Tisch School of Arts at New York University (Arts and Politics) and a Ph.D. from George Mason University (Cultural Studies).

An especially formative experience was her membership in The Spirituals Project, a 70-member community choir founded at the University of Denver’s Lamont School of Music to uplift songs created by enslaved Americans. Andrews was the youngest member, by 20 years, of the multicultural, multigenerational and interfaith collective.

By repeating the notes once sung by people in the 18th and 19th centuries, Andrews found it impossible to ignore the pain, and the perseverance the ancestors needed to survive. Likewise, she wants to preserve and present works of art that offer a portal into histories and memories on a plane that is intimate, immediate and visceral.

Andrews says she has big plans for the museum’s permanent collection, which includes immersive installations by Firelei Báez, multiple bronze sculptures by Elizabeth Catlett, quilts by Faith Ringgold and postmodernist paintings by Emma Amos, who was the last living artist and only female member of Romare Bearden’s Spiral collective.

A childhood friend of Maynard Jackson, Amos grew up in Atlanta in a home where her family welcomed guests like W.E.B. Du Bois, Zora Neale Hurston and a host of artists and activists at the vanguard of social change.

Moving forward, Andrews will have each piece from the museum’s permanent collection, as well as works on loan, photographed, inventoried and digitized for online access. She is already working on numerous acquisitions, and anticipates collecting more pieces by 2025 than were added in the past 15 years.

Next spring, the museum will host Black American Portraits, the exhibition she co-curated at LACMA that covers 200 years of portraiture by and about Black Americans.

“This is not just art for art’s sake,” says Andrews. “The importance of portraiture can’t be overstated because we learn so much, and understand the world so much through what we see.

“Monarchs have used art for generations to convey their power and wealth for posterity. The visual culture around Black people for the majority of our existence in this country was created to justify slavery, document property and minimize our humanity. Next year, we will think of all the ways that portraiture has been used to both demonize and uplift Black Americans. This is art that has a meaning, history, purpose.”

Gail O’Neill is an ArtsATL editor-at-large. She hosts and coproduces Collective Knowledge, a conversational series that’s broadcast on THEA Network, and frequently moderates author talks for the Atlanta History Center.

A Statement On Our Institutional Values – Georgia State University News