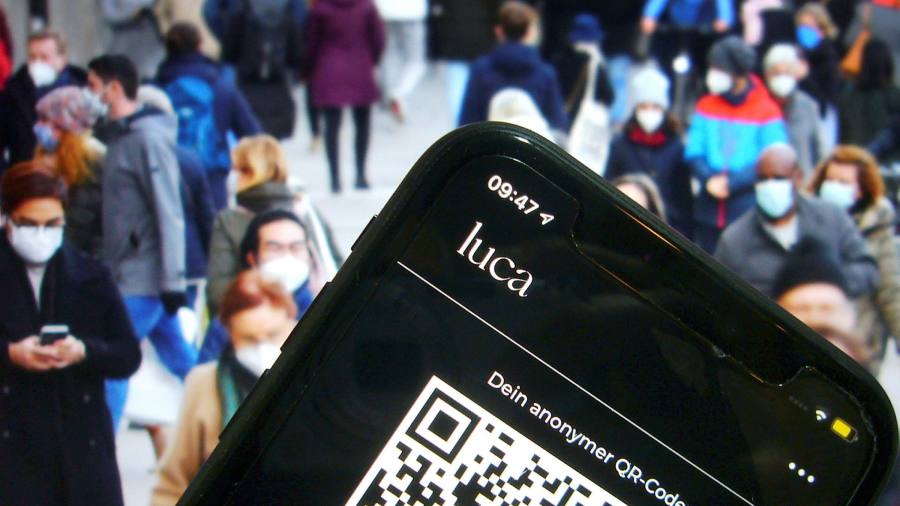 Enikö Ban, public health officer in the German city of Jena, has a long list of contact tracing horror stories. Once, she resorted to advertisements in the local newspaper, begging visitors of a restaurant to contact her office. On other occasions, she sent police hunting for names of people who seemed not to exist.

Her stories all share one particularly German theme: the stubborn attachment of the country’s bureaucracy to the humble piece of paper. Contact-tracing sign-up sheets allowed more mischievous citizens to register as “Mickey Mouse” or “Donald Trump”, or simply leave details not legible enough for health officers to read.

But an end to Ban’s problems was in sight, she said, when a start-up called Luca piloted its digital contact tracing system in her town. “As soon as I saw it, I said: ‘This is it. This is what we need. We can do the contact tracing at once, not over two weeks. Because by then, well, it’s too late.’”

Luca’s emergence has breathed new life into a long-running German debate over its sluggish adaptation to new technologies, and how much that is linked to the country’s deteriorating management of the pandemic.

Hailed last year as one of the world’s best coronavirus crisis managers, Germany has floundered during the second wave of the pandemic, which the Robert Koch Institute, the country’s main health agency, said is now swelling into a third. Infection rates are rising while the rate of vaccination remains slow.

Even in places that use apps for digital check-ins, Ban said, public health authorities still have to plug those contact lists manually into city Excel spreadsheets. Communication with other authorities, often by fax, sometimes takes a week to complete. Critics dub this Germany’s Zettelwirtschaft, which translates roughly as “pen-and-paper economy”.

Apps like Luca aim to streamline these connections. Individuals register via QR code at an event, whether it is going to school or a concert, and then their data is encrypted. If an infection is reported, contact tracers gain access to the data from an event. Registered visitors are simultaneously notified that public health officers are investigating that event, allowing them to isolate even as they await an official call.

“We want Luca to be the positive tool that helps in getting rid of the virus or at least living with the virus,” said Patrick Hennig, one of the company’s founders. “It should be the tool that allows you to take part in social life.”

Jena officials will test that theory. Now armed with Luca’s speedy contact tracing, the city hopes to experiment with short, controlled openings at a school, a restaurant and a public library.

Luca was not the only start-up to notice the need for such tools: According to the digital industry association Bitkom, there are 15 start-ups offering similar systems. Yet none was able to gain public attention.

That changed after Luca’s most famous co-founder, the German rap artist Smudo, made rounds of television shows to promote the app. Since then, even Chancellor Angela Merkel has pointed to Luca as a useful tool for handling the pandemic. Rivals are both frustrated and grateful at the interest Smudo generated.

“He brought awareness to the problem . . . I have to be thankful for that. I’d been trying for months,” said Jan Kus, creator of the Recover app, now adopted by his home city of Cologne.

Kus fought a long battle to get his app used. Last year, he and other start-ups sued the state of North Rhine-Westphalia for stipulating paper sign-in sheets must be used for contact tracing. They eventually won. But even then, restaurants in Cologne using his app before the second lockdown were harassed by monitors of coronavirus regulations, who demanded paper sheets.

Germans have historically high levels of concern over data surveillance. But a recent Bitkom survey suggests the pandemic is causing attitudes to change. More than 60 per cent of those polled felt data privacy could be loosened on health grounds.

“That would never have been conceivable before coronavirus,” said Bitkom’s managing director, Bernhard Rohleder.

Data security experts are wary of the sudden jump on to the digital bandwagon. Luca is a private company that centralises control of its data, which makes it difficult to know how that information could be used, said Paul May, of Privacy Forensics, a consultancy.

“People are suffering corona fatigue, and they’re desperate for a solution,” he said. “I’m very concerned this app is not receiving the same level of scrutiny [as previous applications].”

Last year, Berlin faced heavy pressure to ensure open source infrastructure and data anonymity for its Corona Warn App. It was a success from a privacy perspective, but it did not feed into public health databases, and it allowed users to decide whether or not to notify their digital contact chain.

Kus and other start-ups are now campaigning for Berlin to offer apps fair competition with Luca, and to push for open source solutions.

“If you have the perfect option already, you stick to that,” he said. “My impression is that data security issues sometimes hinder our progress.”

When they first tested it at city council meetings, one of the few public gatherings still being held, only half of members were willing to use it. Now, he said, 90 per cent of them use it.

He has also used Luca to allow Jena’s philharmonic orchestra to practice together inside the city’s historic Volkshaus auditorium, the first time they could play together in three months.

A public debate now, he said, is too late.