Networks need Biden to boost their ratings, and are getting peeved he’s not following through 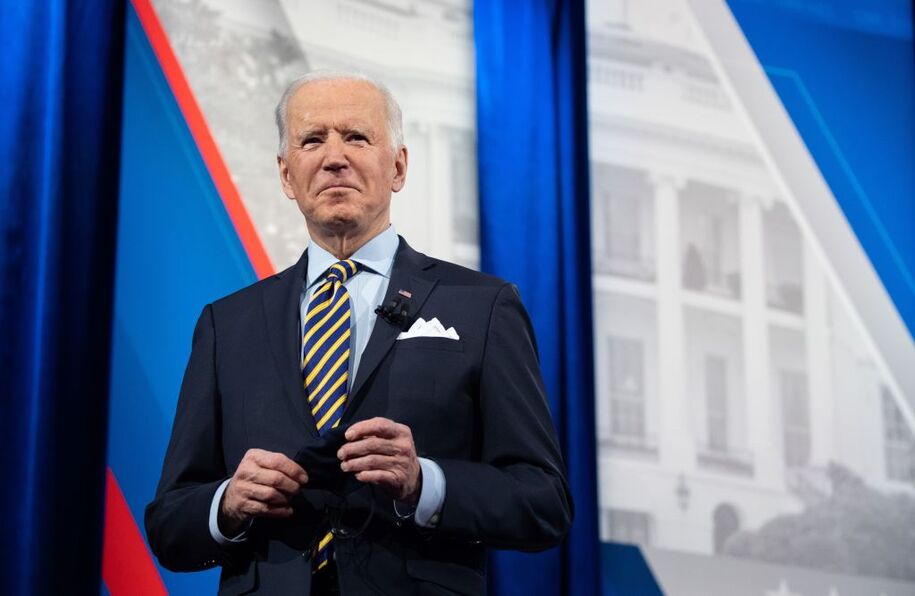 None of this was treated with the contempt that organized efforts to defraud the American public ought to have properly stirred in any “journalist” who still considered themselves one, but instead was treated as a media festival, a carnival in which the games were all crooked, everyone knew them to be crooked, and winking at each other while offering up critiques on which booths were cheating the public most deftly congealed into the only punditry the networks deemed worth offering.

The propaganda would lead, after Republican liars claimed our democracy itself was rigged against them, to a violent assault on the Capitol and the attempted assassination of U.S. lawmakers. There has been not a damn bit of retrospection from the supposed news networks and their associated hangers on about how the most powerful producers of “journalism” on the planet so badly whiffed it on educating the public that the election’s bumbling losers could very nearly instigate a civil war based on no charge more substantive than “because we say so.”

We are now approximately, what, six weeks or so into the Joe Biden presidency? There have been no examinations of the corpse, and few repercussions for the dozens of important voices who successfully goaded gullibles into violence on their behalf. It has been sufficient time for the most self-important press voices to become impatient that the administration that did not kill a half million Americans via sheer apathy is already getting Too Damn Boring for their tastes. In specific, they would like a Presidential Press Conference, please.

No, not a media-hosted and televised town hall. No, not a nationally broadcast presidential address. None of those count—it has to be a news conference, and it has to be before the White House press corps that allowed the last leader to lie so flagrantly through every appearance that it came close to ending democracy.

This has become a very urgent issue for numerous media pundits and outlets, none more so than Fox News, the fascism-promoting propaganda network still scuttling through White House halls despite bearing a direct responsibility for the attempted sabotage of democracy.

Well, that was a given. So what should we do here, then?

First off, it should be a given at this point that the reason the White House reporters want a White House press conference between Biden and themselves is because the political press corps Wants To Be On Camera, and the interminable boringness of the new team’s unwillingness to provide the necessary spectacle is grating on them in a way that half a million deaths could not seem to muster. That’s it. That’s all. It is not that the administration is not answering their questions; the administration is just not answering those questions in a manner that makes for the most dramatic television scenes.

Under Trump, the networks treated lie-filled press briefings like their own daily television show. The new team’s unwillingness to provide the same flamboyant crookedness swiftly led to networks cancelling the show after Trump left—rather straightforward proof that broadcasting the conflict and disinformation was considered superior, by network heads, to imparting actual facts. The new briefings are more informative, but therefore duller, and anchors are no longer cutting to clips of senior reporters being sneeringly bullshitted by the rhetorical equivalent of grocery store patrons attempting to convince beleaguered cashiers that their expired coupons from 1987 on products no longer manufactured are too still valid, so shut up.

Clips of each White House journalist getting impotently buried in an avalanche of insulting non sequiturs they are not allowed to rebut is what our national journalism is all about, thank you very much, and Biden’s delay here is threatening to erase several dozen names from the chyrons. We need a Star Wars Holiday Special, damn it. We need an Up With People. We need a variety hour to stir up the network schedules, so get thy presidential rump out there, Mr. President, and ride the damn unicycle so we have something to point our cameras at.

Making all this more irritating is, of course, the context. In past years many of us would be on this same bandwagon, muttering that the nation’s top leader certainly ought to be expected to address questioners directly, and in theory Important Questioners, and in theory being the spokesperson for the government’s next plans and priorities is the very essence of the job. But that was before it was proven so conclusively that all of this was, the whole time, complete and utter bullshit—a farce. Not only can any politician stand up in front of a journalism crowd and lie brazenly with no cultural or political repercussions, the top politician can do it, and incessantly, and to the point where the spectacle puts visible gouges on democracy with every performance.

What “the president” says to the press is, it turns out, completely irrelevant. It can be earnest, or crooked, or list off facts, or claim the moon is made of cheese, and not a damn bit of it matters except that it ends with a few new clips for a few pundits to snipe over and for propagandists to recut into useful fiction while the rest of America wanders off, eyes glazed over, now convinced that however long they spent doing their begrudging civic duty of paying attention was time cheated from them after all.

This is not an important tradition. We all thought it was, and we were made fools of. The utter inconsequence of the so-called norm of press “accountability” was rubbed in our faces, daily, for years.

President Joe Biden should indeed hold a press conference. He should utterly ignore the first question, and instead launch into an extended diatribe explaining that not only did he win his November election by a truly historic amount, he won it by such large margins that Canada is now part of the United States and everyone in his home state of Delaware now counts as two people for census purposes. Any question about the vaccination plan that saw 100 million more doses purchased by government this week should instead be redirected into a discussion of how it has now been proven that getting the vaccine makes men three times as handsome, giving them taut abdomens and chins so chiseled they can be used to chop onions. Fox News will pipe up with a question about why Mr. Potato Head has murdered Dr. Seuss, upon which our president can declare that it was because Mr. Potato Head is in fact on Seal Team 6, and Dr. Seuss, although dead, was discovered to be a member of al Qaeda.

None of it matters a damn bit, and Important Correspondent Rick Slabjaw will dutifully report each fiction back from his remote feed to a panel consisting of a host and three experts who do not know a damn thing about any of the subjects mentioned but once held a job in an important campaign for six weeks and therefore will urgently dispense ad-libbed speculations as to whether Americans are ready to accept an anthropomorphic root vegetable as a faked new national hero or whether Biden ought to have focused more on members of the tree nut family.

You are all a joke, an embarrassment, and a waste of airline seats. Everyone involved in the Trump years ought to be put on ships and dropped off on an Antarctic glacier while the rest of us start over. The duty of maintaining our national discourse should instead be assigned to the editors of Teen Vogue, our nation’s three most senior primate research fellows, and a collection of four dozen high school teachers, hollow-eyed souls who know bullshit when they see it and already own a big red pen to draw circles around it. Dear God, to think that the very premise of our democracy, the accountability of our leadership, could be erased so thoroughly by literally anyone willing to be buffoonish enough to do it.

Fine, whatever. Have the damn press conference whenever you like. It will be an embarrassment, and the subsequent sniping over whether Biden’s not entirely controlled stutter has resulted in a mispronunciation so severe it could yet undermine his presidency, a discussion tag-team populated by Karl Rove, Rick Santorum, Newt Gingrich, Steve Bannon, and a crate of three hundred venomous spiders, will make for good television and will probably not so mislead the public as to yet again threaten to bury democracy under eight figures’ worth of malignant political tumor. Probably. For the most part.

I am so, so tired. Each of the institutions bearing the most responsibility for our multiple catastrophes are hellbent on returning to “normal” and pretending none of it happened, which is the one thing—the only thing—still absolutely assured to result in it all happening again.