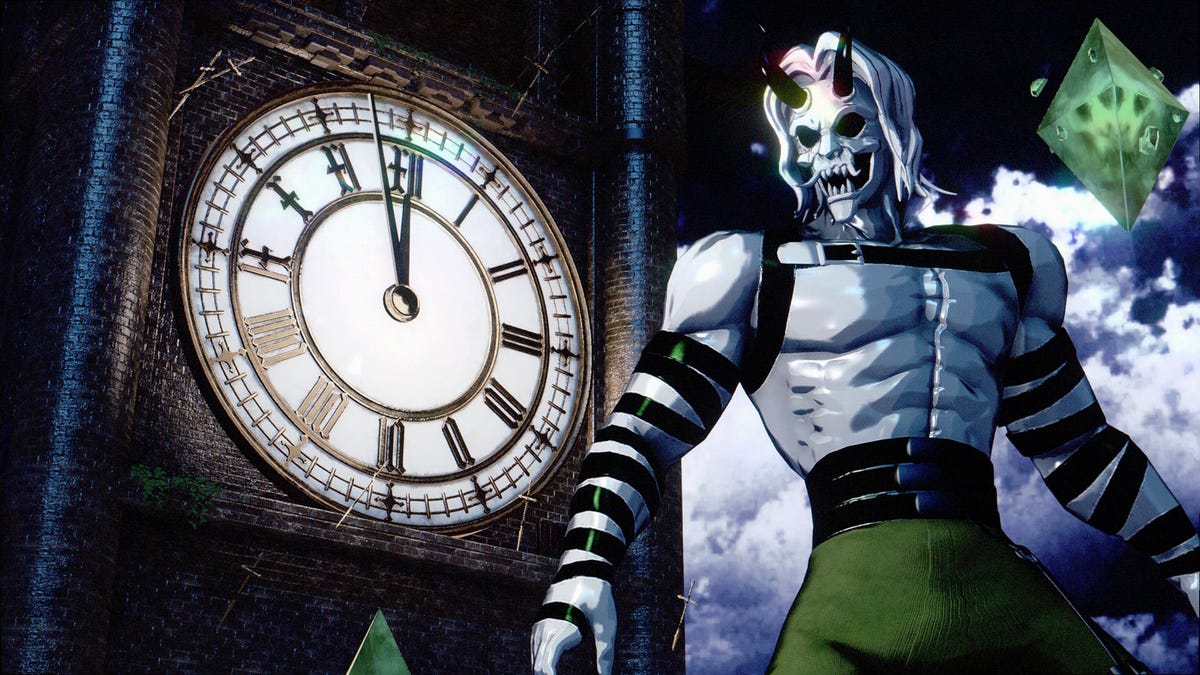 The game inspires you with its lightning visuals—turquoise water, cold-blooded girls with rainbow hair, buildings cast from pure porcelain—to move through levels fast, like you’re in a pretty nightmare, but Machine Girl’s glitter vomit music keeps you moving. I’m obsessed with the soundtrack, so I asked Ben Esposito, Neon White’s developer and Matt Stephenson, the producer behind Machine Girl, how they made it happen.

It started in 2020, when modern life was imploding and Esposito sent Stephenson, someone he had no previous connection to, an email.

“I’m working on an unannounced PC game right now,” Esposito said, “and I think your music has the perfect energy for it (it’s a 2000’s edgy Deviantart anime first-person shooter… think like a lost PS2 game for the overall tone and style). Been a fan since Gemini but I heard ‘Cyan Hardcore’ I was like…. this is it.”

The 2015 album Gemini and the track “Cyan Hardcore” from the 2020 EP RePorpoised Phantasies are both speckled with landmark Machine Girl sounds, like shattering, glassy synth samples and drum fill sprays and breaks. “Cyan Hardcore” in particular has the same “I’m in a game, underwater” quality many of the tracks on Neon White’s two-part soundtrack, The Wicked Heart and The Burn That Cures, have. The cyclical melody pings through steel drum plugins and gurgles through low-pass filters; it’s very aquatic, but it sticks to being tinny and bright, like the sound you hear when you unlock a PS3 achievement.

Because of this sonic parallel (and, perhaps, emotional parallel—Machine Girl songs are full of the same mounting energy you get when playing a game like Doom), Machine Girl fans have been mapping Stephenson’s music to games for years. In 2020, an independent development team released Nightmare, a staticky first-person shooter it said was “heavily inspired” by the 2017 album …Because I’m Young Arrogant and Hate Everything You Stand For, which leans all the way into bloody shooter aesthetics.

Video games and the Machine Girl discography are best friends, and their relationship is cherished. Eli Schoop, an experimental music writer, told me that “Machine Girl is sick because they take the breakbeats and MIDI instrumentals from early PS1 and [Sega Saturn] games and infuse it with hardcore and rave shit in a way few others have.”

“I think it’s probably an intrinsic thing to anyone who both enjoys digital hardcore and gaming to synthesize those loosely intertwined subcultures,” Schoop continued. “[Stephenson] is definitely a true fan [of both], so it feels genuine and dope.”

Stephenson acknowledges his influences and the power in his fandom himself, telling me “I think it’s pretty obvious from all of my music that it’s very influenced by video games.”

“I loved video games as a kid and certain soundtracks (particularly those on the Sega Dreamcast) were hugely informative for me. But I didn’t start really consciously thinking about video games while making music until working on the Neon White soundtrack,” he said.

“I think for anyone growing up on video games, we form emotional attachments to the video game OSTs of our youth,” he continued. “If I can provide that for anyone, that’s what’s most important for me.”

Going back to 2020, Stephenson accepted Esposito’s email pitch after determining he wasn’t “just some kid in his bedroom making a video game,” and the two started collaborating on the soundtrack. The process was difficult, but ultimately fruitful (clearly…have you heard it?)

“When we started working on the score, Matt sent over an extremely intimidating Dropbox folder of unfinished music,” Esposito said. “There must have been at least 50 tracks with filenames like ‘mg2019 alpha 16 2020 D.mp3’”

After sorting through dense file names, the two came out with handfuls of incomplete bursts of music, fireworks waiting to be lit.

“By the end, probably about 50% of the soundtrack was built from the pre-existing material, and the other 50% was made from the ground up for the game,” Esposito said.

But molding and completing that material specifically for Neon White introduced Stephenson to a unique set of obstacles. He had never composed music for a video game before, and currently has no additional soundtracks planned (though he’d love to change that), so working under someone else’s creative vision required some adjusting.

“At times, it felt like trying to solve a puzzle, trying to find the right vibe for certain songs,” Stephenson said. “Every song in the game had a prompt for where it needed to fit in, and so I had to focus and try to make songs for particular levels, cues, or menus. I usually make things much more stream of consciousness so it took more discipline and focus.”

Sometimes following Esposito’s prompts was hard, and tracks got cut because they “just weren’t the vibe,” Stephenson said. But his fresh focus pointed and landed into a final soundtrack that both he and Esposito were happy with.

Stephenson calls the finished product “colorful, lush, energetic, spastic, whiplash-inducing, fast, excessive, maximalist, proggy, danceable, and low fat.” The description lines up with how you feel playing through it—the giggling angels, launching through the air shooting scrawny monsters til you reach the end, all guided by Machine Girl. You feel as if you’re riding something strange and aggressive, beastly but buoyant.

The music is also quite practical. Esposito notes that the songs that accompany actual gameplay, which requires speed and precision and flying, go particularly “hard, maybe harder than you’d expect at first, but that’s intended,” he said. You don’t want to be sluggish when you break through demons and yearn for absolution, as is the premise of the game. Like heaven itself, Esposito says that the soundtrack is meant to be “aspirational.”

“If the music feels too fast, then you’re not playing fast enough,” he said.

Salvation, demons, and jungle music. When added together, they sound like one fucked up subreddit. But like the careful planning of the soundtrack, this, too, is intentional. After all, according to Neon White’s marketing, the entire game is born with “freaks” in mind.

I asked Esposito about this, how “freakiness” lives in every aspect of Neon White.

“Neon White doesn’t make sense on paper,” he said. “It shouldn’t work, but it does because it’s not trying to appeal to everyone. It’s a celebration of fringe gameplay and aesthetics. You absolutely don’t have to be a freak to enjoy Neon White, but it was made for the freaks who love media that’s weird, unhinged, and 100% true to itself.”

The game’s music, a knuckle sandwich of sugary, crackling breakbeats delivers hyperactive gameplay to the freaks with solemn passion.

“It wouldn’t be the same game at all without Machine Girl,” Esposito said. “Not only because Matt is an amazing and prolific producer, but because [Machine Girl’s] art reflects the same passion for overstimulating, unhinged, and underloved media that the game was built to celebrate.”