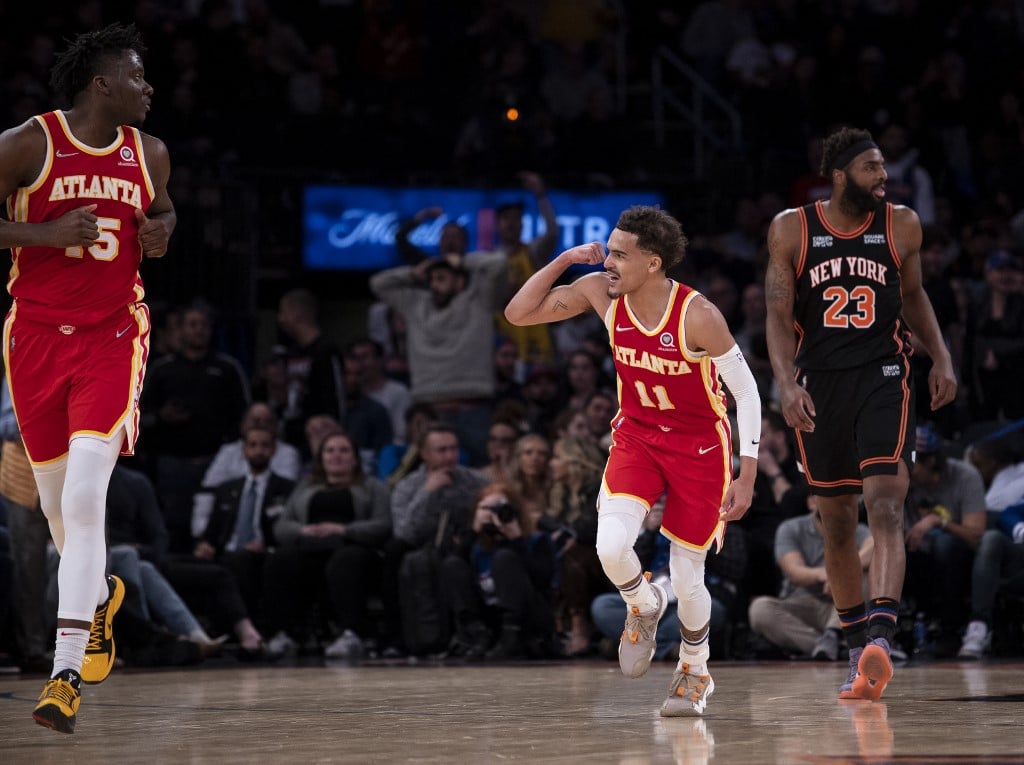 FILE – Trae Young #11 of the Atlanta Hawks reacts after a shot against Evan Fournier #13 of the New York Knicks at Madison Square Garden on March 22, 2022 in New York City. Michelle Farsi/Getty Images/AFP

Trae Young is back for the Atlanta Hawks in time to face his favorite foe.

Young and the Hawks are slated to visit the New York Knicks on Wednesday night in the latest rematch of a 2021 Eastern Conference quarterfinal series.

Young looks to put more distance between himself and the controversy stemming from his recent one-game absence. Young returned to the Hawks Monday night, when he posted a double-double as host Atlanta fell to the Oklahoma City Thunder, 121-114.

The Knicks have been off since Sunday, when they continued a four-game homestand by beating the Cleveland Cavaliers 92-81.

Young put together a routine stat line while taking on his usual workload Monday. He finished with 23 points and 10 assists while playing 36:40 — right in line with his season averages of 27.6 points, 9.6 assists, 35.5 minutes per game.

It was his first appearance since Nov. 30.

The fifth-year star guard, battling a right shoulder injury, didn’t attend Friday’s 117-109 win over the Denver Nuggets. The Athletic reported Young’s absence stemmed from a Friday morning disagreement with head coach Nate McMillan, who requested Young attend the pregame shootaround and receive treatment on the shoulder during the walkthrough.

Young wanted to get treated during the shootaround, after which McMillan reportedly said Young could either contribute off the bench Friday or sit out. McMillan said Monday morning he never gave Young such an ultimatum.

“I will never, ever — and have never, ever — told a player not to show up for a game,” McMillan said before Monday’s game. “That’s just false.”

“I’m just going to focus on basketball and focus on helping my team win,” he said.

Few teams seem to crystallize Young’s focus like the Knicks, against whom he is averaging 27.9 points and 9.2 assists per game in 14 regular season contests. He also averaged 29.2 points and 9.8 assists in the Hawks’ five-game win over the Knicks in the 2021 playoffs, when Young emerged as a Reggie Miller-like enemy during games at Madison Square Garden.

The Knicks will oppose a regular tormentor one game after getting the best of a potential budding thorn in their sides.

Donovan Mitchell, who was linked to New York in trade talks throughout the summer before being dealt to Cleveland, scored 23 points on 8-of-22 shooting Sunday. He collected 38 points on 12-of-20 shooting in the Cavaliers’ 121-108 win over the Knicks on Oct. 30.

The Knicks had much more on their mind Sunday than simply stopping Mitchell.

The win snapped a five-game home losing streak for New York, which was outscored by 28 points in the second half of a 121-100 loss to the Dallas Mavericks on Saturday. It also marked just its fourth win this season against a team currently occupying a playoff or play-in tournament spot.

The 81 points allowed were also a season-low for the Knicks, who surrendered the fewest and sixth-fewest points in the NBA, respectively, in Tom Thibodeau’s first two seasons as head coach. But the Knicks entered Sunday having allowed at least 120 points in three of their previous five games.

“I’m just happy we came away with a win the way we did,” Knicks point guard Jalen Brunson said. “It was a grind offensively. But the fact that our defense was able to keep us in it is a good sign.”