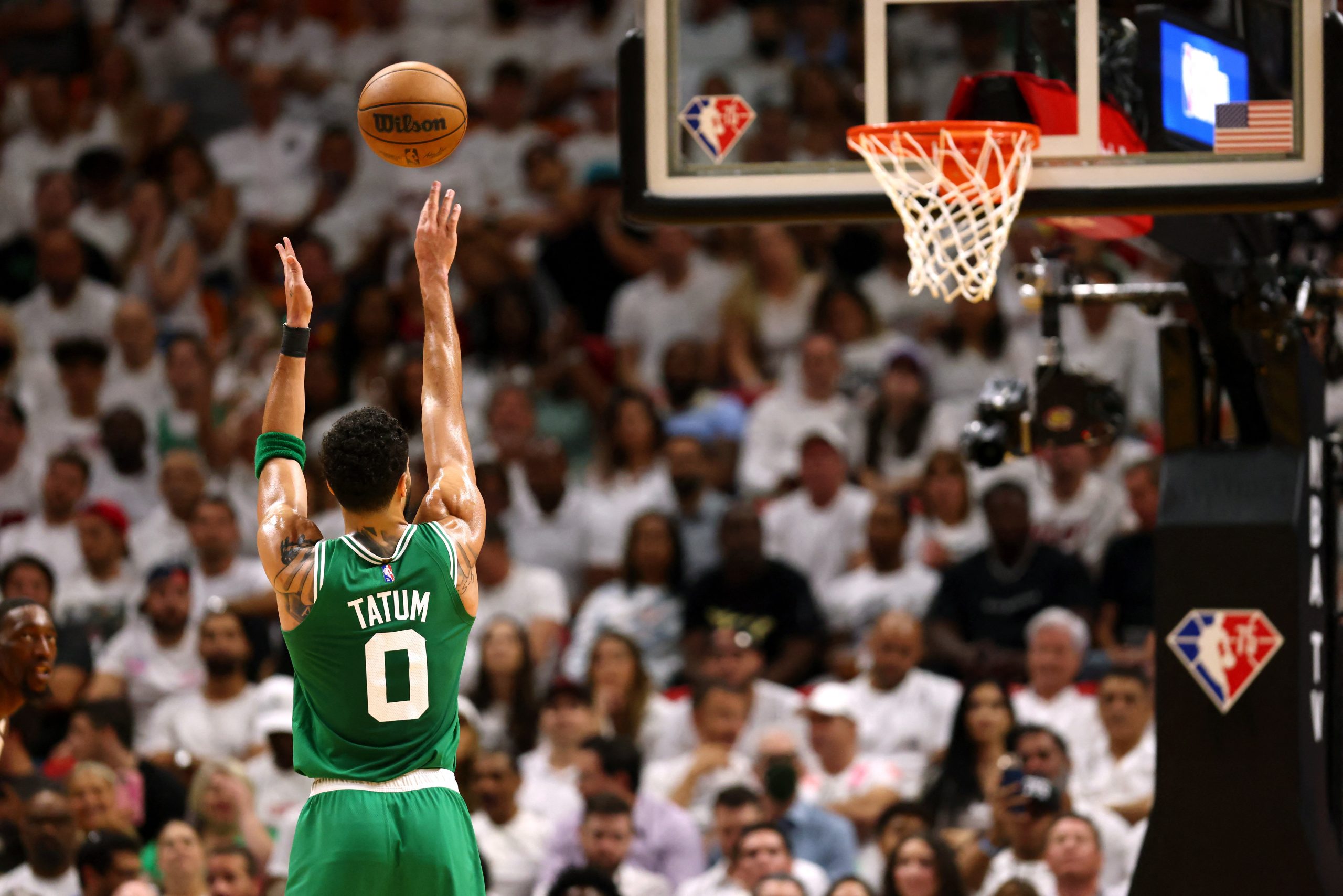 Jayson Tatum of the Boston Celtics shoots a free throw during the second quarter against the Miami Heat in Game Two of the 2022 NBA Playoffs Eastern Conference Finals at FTX Arena on May 19, 2022 in Miami, Florida.   (Getty Images via AFP)

MIAMI – Jayson Tatum scored 27 points as the Boston Celtics roared back to level the NBA Eastern Conference finals series with a 127-102 thrashing of the Miami Heat in game two on Thursday.

Bolstered by the return of Marcus Smart and Al Horford, who both missed Tuesday’s 118-107 game one drubbing, Boston were a team transformed as they squared the best-of-seven series 1-1.

Boston made only 11-of-34 from three-point range in Tuesday’s lopsided opener, when Miami out-hustled them to claim a decisive victory.

But the Celtics shrugged off that misfiring performance in emphatic fashion, draining 20-of-40 from beyond the arc to overwhelm Miami.

Tatum led the scorers but there were huge contributions throughout the Celtics lineup. Jimmy Butler of the Miami Heat shoots the ball against Marcus Smart of the Boston Celtics during the second quarter in Game Two of the 2022 NBA Playoffs Eastern Conference Finals at FTX Arena on May 19, 2022 in Miami, Florida.  (Getty Images via AFP)

Grant Williams added 19 from the bench, while Horford and Payton Pritchard had 10 points each.

Jimmy Butler led the Miami scoring with 29 points but only three other Heat players made double figures.

A wild first quarter saw Miami pick up where they had left off in Tuesday’s game one, with Max Strus hitting back-to-back three-pointers to leave the Heat ahead by 10 points at 18-8.

But Boston produced a scintillating 17-0 run to turn the quarter on its head, with their long-range shooting vastly improved.

Brown knocked down a trio of three-pointers in the first period to leave the Celtics up by 35-24 heading into the second quarter.

The Celtics’ shooting clinic continued in the second quarter, with Pritchard nailing a 26-foot three-pointer to put Boston 19 points clear at 47-28 midway through the period.

A Tatum three-pointer and two free throws soon afterwards left Boston 27 points clear at 64-37 and shortly afterwards the Celtics had built a 29-point lead when Grant Williams’ driving layup made it 68-39. Jayson Tatum of the Boston Celtics drives to the basket against Max Strus and Jimmy Butler of the Miami Heat during the third quarter in Game Two of the 2022 NBA Playoffs Eastern Conference Finals at FTX Arena on May 19, 2022 in Miami, Florida.  (Getty Images via AFP)

Smart put the seal on a devastating first-half display with a pullup jump shot to make it 70-45 at half-time.

Miami rallied late in the third quarter and cut the Boston lead to 17 points at one stage, but the Celtics regrouped and again pulled away.

A three-pointer from Tatum took them 25 points clear in the closing seconds of the third quarter at 94-69, a lead which they held going into the final quarter.

Smart made it a 30-point lead early in the fourth, bamboozling the Miami defense to drain a superb stepback three-pointer from 26 feet as Boston closed out a brutal victory.

Game three in the series takes place in Boston on Saturday.