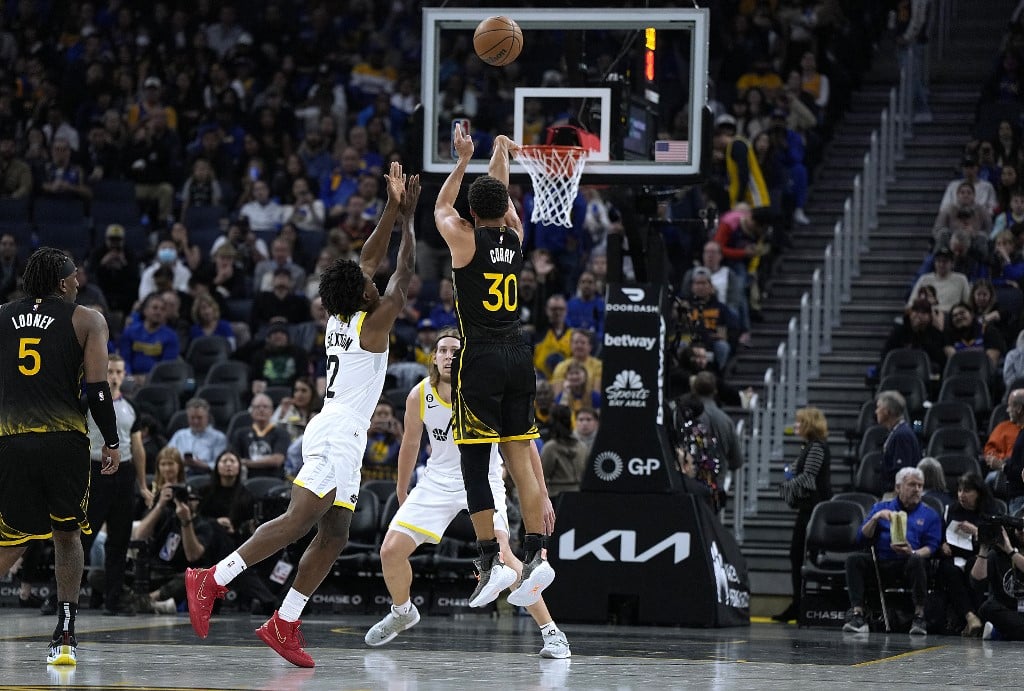 Stephen Curry #30 of the Golden State Warriors shoots a three-point shot over Collin Sexton #2 of the Utah Jazz during the third quarter at Chase Center on November 25, 2022 in San Francisco, California. Thearon W. Henderson/Getty Images/AFP

Stephen Curry poured in a game-high 33 points and teamed with Klay Thompson for 12 3-pointers on Friday as the Golden State Warriors improved upon their stellar home record with a 129-118 triumph over the Utah Jazz in San Francisco.

In winning for an eighth straight time at home to improve to 9-1 in their own building, the Warriors got double-figure scoring from all five starters and reserve Jordan Poole in their first meeting of the season with the upstart Jazz.

Lauri Markkanen had a team-high 24 points for Utah, which lost a third straight for the second time in two weeks. The Jazz have dropped six of eight overall.

The high-scoring affair featured 31 3-point hoops, including 20 on 45 tries by the Warriors. Curry, the league leader in threes made, shot 6-for-13 from deep, while Thompson went 6-for-12.

Stephen Curry put the game away for the @warriors, scoring 13 of his 33 points in Q4 to seal the win!

Curry had two of his 3-pointers in a 15-point first quarter as Golden State grabbed a lead it held for all but 19 seconds the rest of the way.

Kelly Olynyk bombed in three straight 3-pointers and Markkanen added a fourth in a 20-11 Jazz burst that allowed the visitors to get a nose in front at 71-70 near the midpoint of the third quarter. Utah had made just four 3-pointers in the first half, during which it trailed by as many as 17 points.

Golden State’s Andrew Wiggins countered immediately with a four-point play, and when Thompson nailed four 3-pointers in a personal 2 1/2-minute flurry, the Warriors were back in charge at 97-86 before period’s end.

Thompson and Wiggins finished with 20 points apiece for the Warriors, who completed a 2-0 homestand that began with a 124-107 win over the Los Angeles Clippers on Wednesday. Poole added 19 points, Draymond Green 13 and Kevon Looney 10 to go with a game-high 12 rebounds.

Olynyk (21) and Jordan Clarkson (21) made it three Utah players with 20 or more points on a night when the Jazz allowed 120 or more for a third straight game. Collin Sexton added 13 points, Jarred Vanderbilt had 12 points and a team-high 10 rebounds, and Malik Beasley put up 10 points.

Clarkson also contributed a game-high 10 assists for Utah, which finished 11-for-45 on 3-point attempts.