NBA: Pelicans pull away in fourth to top Suns, tie series at 2-2 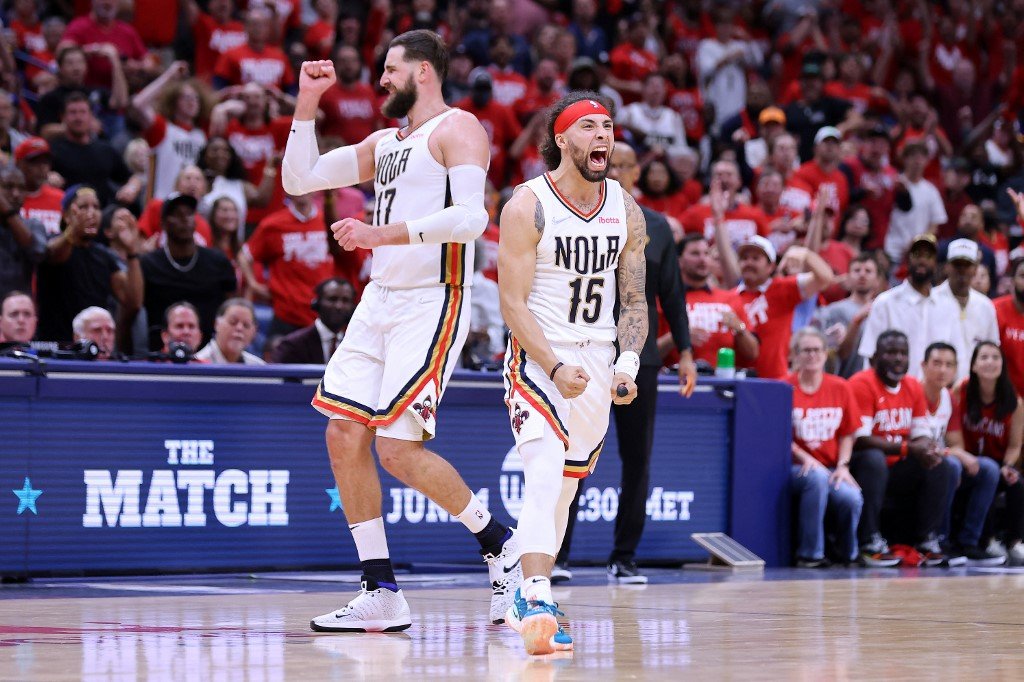 Jose Alvarado #15 and Jonas Valanciunas #17 of the New Orleans Pelicans react during the second half of Game Four of the Western Conference First Round against the Phoenix Suns at the Smoothie King Center on April 24, 2022 in New Orleans, Louisiana. Jonathan Bachman/Getty Images/AFP

Brandon Ingram scored 30 points and Jonas Valanciunas added 26 points and 15 rebounds as the host New Orleans Pelicans defeated the Phoenix Suns 118-103 on Sunday night to even their first-round playoff series 2-2.

Game 5 is set for Tuesday in Phoenix.

Ingram scored 16 points as the Pelicans outscored the Suns 35-23 in the third quarter. Valanciunas finished with a career playoff high in points, CJ McCollum scored 18 and Herbert Jones Jr. 13.

Brandon Ingram is the first player in @PelicansNBA franchise history to have 3 straight games with 30+ PTS in the Playoffs. #NBA75 https://t.co/WTqZjuOxzM

The Suns remained without leading scorer Devin Booker, who suffered a hamstring injury in Game 2.

Ingram made three straight baskets then assisted on consecutive baskets by Valanciunas and Jaxson Hayes to start the third quarter. The resulting 10-2 run gave the Pelicans a 59-53 lead.

New Orleans led by as many as seven before Crowder made three free throws to trim the lead to 65-63.

Devonte’ Graham made two free throws to give the Pelicans their biggest lead to that point at the end of the third quarter, 84-74.

Phoenix scored the first five points of the fourth quarter, but New Orleans rebuilt the lead to nine.

Landry Shamet’s jumper pulled the Suns within 89-85 before Valanciunas answered with seven straight points. Jones scored three and Jose Alvarado made two free throws to complete a 12-0 run that gave the Pelicans a 101-85 lead.

Crowder’s steal and layup ended a three-minute scoring drought for the Suns and got them within 14 points, but they couldn’t get any closer.

The Pelicans led for most of the first quarter and finished the period with a 25-22 edge as Ingram scored 11 points. Ayton had 10 points, but the Suns missed all five of their 3-point attempts.

McCollum made three baskets to help New Orleans take its largest lead of the half at 39-31.

The Pelicans didn’t make a field goal during the final six minutes of the half. Phoenix pulled even on a basket by Cameron Payne, and Crowder’s 3-pointer helped provide a 51-49 halftime lead.