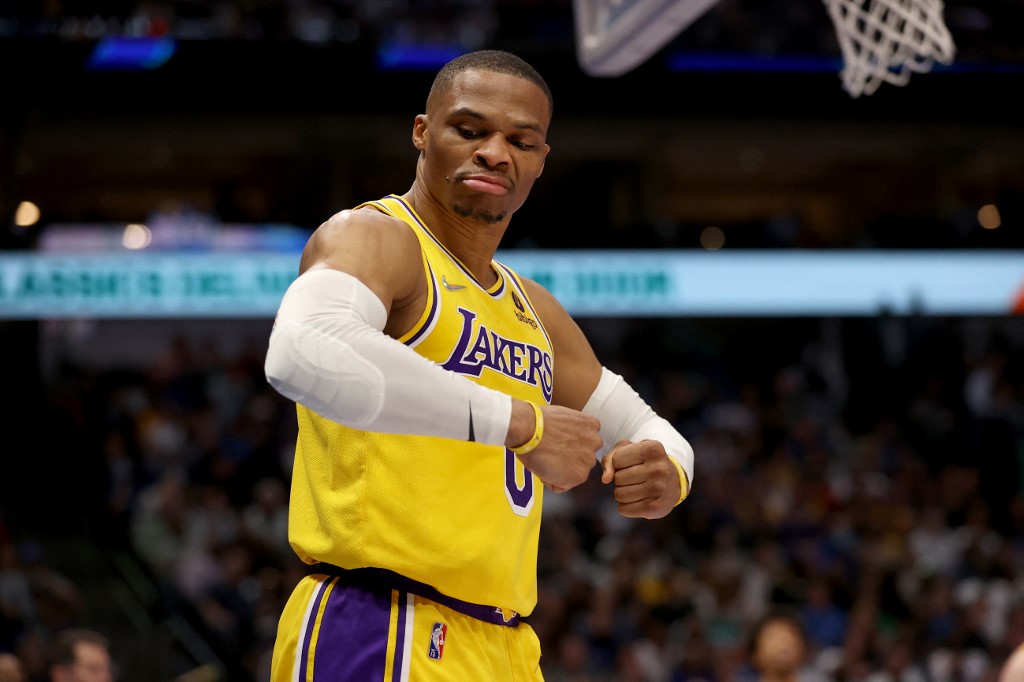 Russell Westbrook #0 of the Los Angeles Lakers reacts against the Dallas Mavericks in the second half at American Airlines Center on December 15, 2021 in Dallas, Texas. Tom Pennington/Getty Images/AFP

Lakers point guard Russell Westbrook has two more days to decide whether to stay in Los Angeles for a second season.

Westbrook is reportedly “undecided” as to whether to exercise his $47 million player option for 2022-23.

“He has more days to figure all that out with his family,” Pelinka said. “But if he comes back, he will be embraced here with open arms and want to put a path in front of him to have a successful season.”

Westbrook didn’t mesh well with fired coach Frank Vogel and became a target of the L.A. fan base as injuries pulled apart the veteran-laden roster. The Lakers missed the playoffs and LeBron James and Anthony Davis played just 21 games together.

Rumors percolated last week that James and Kyrie Irving, teammates on the Cleveland Cavaliers’ championship team, could reunite. But any thoughts about that pairing would be moot with Westbrook’s salary on the books, barring a sign-and-trade deal with the Nets.

The Lakers have only the mid-level exception worth $6 million available as of Monday.

Pelinka indicated Westbrook and Ham have kept in contact and conversations about his role with the team have centered on Westbrook being willing to focus on defense and play off the ball more frequently.

A nine-time All-Star and two-time scoring champion, Westbrook’s average of 18.5 points per game last season was his lowest since the 2009-10 season.