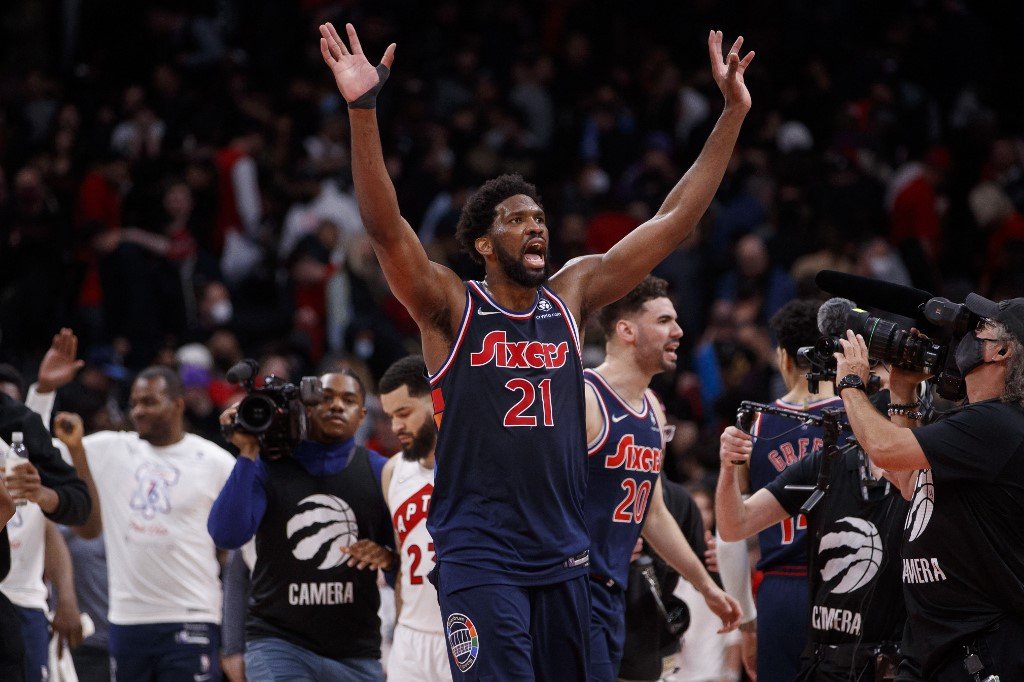 Joel Embiid #21 of the Philadelphia 76ers waves after defeating the Toronto Raptors in Game Three of the Eastern Conference First Round at Scotiabank Arena on April 20, 2022 in Toronto, Canada. Cole Burston/Getty Images/AFP

Joel Embiid sank a turnaround 3-pointer with 0.8 seconds to play in overtime and the visiting Philadelphia 76ers defeated the Toronto Raptors 104-101 in Game 3 of their Eastern Conference first-round playoff series.

Philadelphia leads the best-of-seven series 3-0 and will look to complete a sweep on Saturday in Toronto.

Embiid scored 18 of his 33 points in the third quarter and finished with 13 rebounds. His winner came, on an inbounds play after a timeout, came on a pass from former Raptor Danny Green.

JOEL WINS IT FOR THE SIXERS FROM DEEP IN OT!#NBAPlayoffs presented by Google Pixel pic.twitter.com/gYFaKf6GY9

Tyrese Maxey and James Harden each added 19 points for the 76ers. Harden added 10 assists before fouling out in the final minute of the fourth quarter. Tobias Harris had 11 points and 12 rebounds for Philadelphia.

The Raptors, who led by as many as 17 points in the second quarter, never trailed in regulation and were ahead by one point entering the fourth quarter.

Anunoby made a 3-pointer and Achiuwa sank a layup to give Toronto a five-point lead with 2:03 left in regulation.

Joel Embiid was DOMINANT in the second half and overtime scoring 28 points including the game-winner in OT to lift the @sixers to the 3-0 series lead!@JoelEmbiid: 33 PTS, 13 REB

Maxey came back with a 12-footer and Harden added a layup to slice Toronto’s lead to one with 1:14 left. Harden made one of two free throws to tie the game at 95 with 49.7 seconds to go. Harden fouled out with 27.5 seconds remaining.

Achiuwa missed two free throws after Harden’s sixth foul, and the game headed to overtime after the Sixers’ Embiid and Harris missed shots in the final seconds.

Maxey’s nine-footer put Philadelphia ahead 99-97, but Anunoby came back with a 3-pointer with 2:58 left in overtime. Embiid made a jumper with 2:36 remaining before Anunoby made one of two free throws to tie it with 26.2 seconds left.

Toronto finished the first quarter on a 14-4 run to lead 29-19, taking advantage of nine 76ers turnovers.

Embiid’s three-point play cut the deficit to one with 5:03 left in the third quarter. Toronto’s lead reached seven when VanVleet made three free throws with 2:57 remaining. Embiid hit three of four foul shots in the final minute to cut Toronto’s lead to 75-74 after three quarters.

Scottie Barnes (sprained ankle) missed his second straight game for Toronto. Matisse Thybulle did not play for Philadelphia, as he was unable to enter Canada due to his vaccine status.