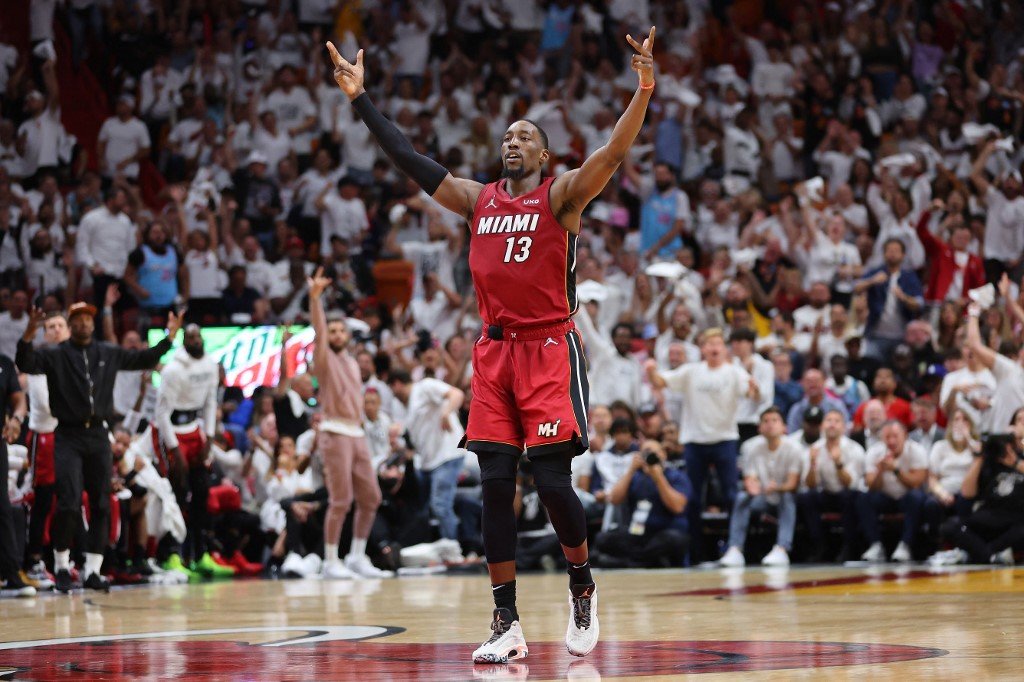 Bam Adebayo #13 of the Miami Heat celebrates a three pointer against the Atlanta Hawks during the second half in Game Five of the Eastern Conference First Round at FTX Arena on April 26, 2022 in Miami, Florida. Michael Reaves/Getty Images/AFP

While the Miami Heat’s star player is expected to play, the same can’t be said for the Philadelphia 76ers’ franchise cornerstone.

Jimmy Butler (knee), who missed Game 5 of the Heat’s first-round series win against the Atlanta Hawks, will likely return at home to face the Sixers on Monday in Game 1 of the Eastern Conference semifinals.

Tyler Herro (non-COVID illness) is also expected back while Kyle Lowry (hamstring) has been ruled out for the top-seeded Heat.

Philadelphia’s Joel Embiid is dealing with a bevy of injuries including a torn ligament in his right thumb, a concussion and an orbital fracture from when Toronto’s Pascal Siakam elbowed him late in Game 6 with the Sixers up by 29 points.

Butler, a former Sixer, believes that he’ll be 100 percent to open this tough series.

“It’s all right,” Butler said, referring to his knee. “We (had) another day in between. More treatment. Get out there, rip and run. And I know it’ll be ready to hold up come Monday. But the time off has been great for myself and so many other guys that are nicked up.”

No matter who’s available, the Heat are preparing for a battle. It’s the only way they know.

Said Miami coach Erik Spoelstra: “We are who we are. We’re not a passive defensive team. If you want to be aggressive, you have to be exceptionally detailed, disciplined, focused. We have deep respect for them with the names they have available.”

The fourth-seeded Sixers haven’t advanced to the Eastern Conference Finals since 2001 and last won a championship in 1983.

Philadelphia has been eliminated in the conference semifinals in three of the last four years.

While Embiid could return for Game 3 in this series, it’s clearly going to be a daunting challenge to start without him on the road.

The Sixers will counter with a combination of DeAndre Jordan, Paul Reed and Charles Bassey. This trio of reserves won’t come close to matching Embiid’s Most Valuable Player-caliber production, but it’s their cruel reality.

“We’re gonna need added efforts from different guys with different opportunities,” Tobias Harris said. “Overall, we kind of know from the last series what worked for us. We have to move the basketball and just whatever happens, go from there. Guys have to be properly spaced and being prepared and ready.”

The Sixers went 6-8 without Embiid during the regular season.

“We almost won the game in Golden State without Joel so it’s possible,” 76ers coach Doc Rivers said. “We just have to focus on the two games in Miami and see what happens.”

The two teams split four meetings during the regular season.