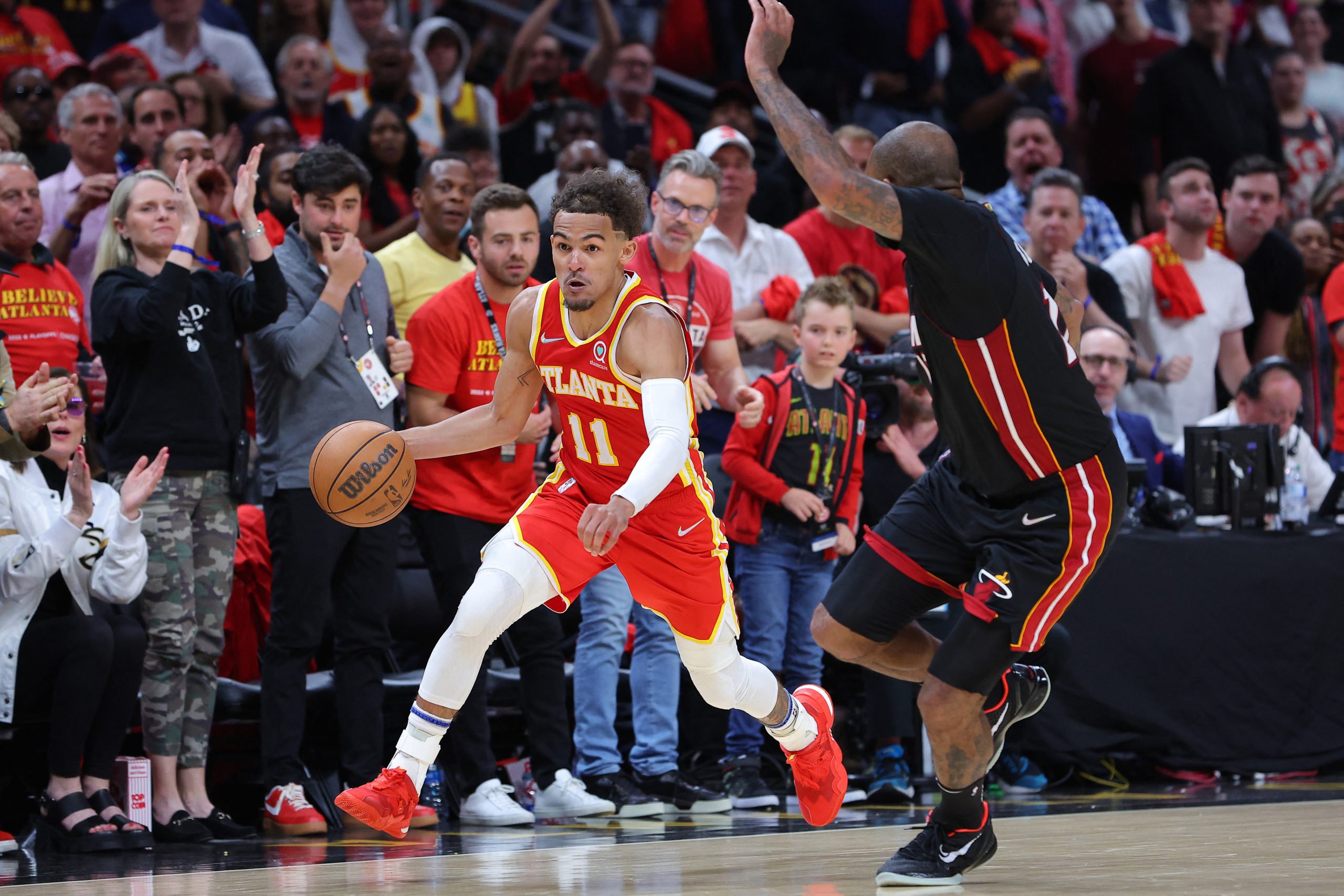 Trey Young of the Atlanta Hawks drives past PJ Tucker of the Miami Heat in Game Three of the NBA Eastern Conference First Round playoffs at State Farm Arena on April 22, 2022 in Atlanta, Georgia.   (Getty Images via AFP)

LOS ANGELES – Trae Young delivered the game-winner for Atlanta in a 111-110 victory over the Miami Heat on Friday as the Hawks clawed their way back into their NBA playoff first-round series.

The Hawks cut the deficit in their best-of-seven Eastern Conference first-round series to 2-1.

The reigning NBA champion Milwaukee Bucks, meanwhile, grabbed a 2-1 series lead with a 111-81 rout of the Chicago Bulls.

PJ Tucker’s three-pointer with less than a minute to play had put the Heat up 110-109 as the clash in Atlanta came down to the frantic final minutes.

With 5.5 seconds remaining Young drove the lane and floated in the basket that proved the difference, with Miami star Jimmy Butler watching his contested three-point effort at the buzzer bounce off the rim.

“I just wanted to try to get to the basket,” said Young, who scored 24 points to lead six Hawks players in double figures. “I knew there was only 10 seconds left … I didn’t want to settle for a three. So I tried to get all the way to the rim and either get a foul or a layup.”

The top-seeded Heat had won the first two games of the best-of-seven Eastern Conference series at home.

Their chances of taking a 3-0 stranglehold looked good when a 21-0 scoring run in the third quarter saw them take an 84-68 lead in a game that was delayed more than half an hour after a suspicious package was found outside the Hawks’ arena before the game.

But the Hawks, no doubt well aware that no NBA team has come back from a 3-0 deficit to win a best-of-seven series, closed the third on a 9-1 scoring run.

Young’s three-pointer knotted the score at 104-104 with 2:26 remaining and it was a dogfight from there.

Bogdan Bogdanovic scored 18 points off the bench for Atlanta. That included three three-pointers in the Hawks’ fourth-quarter fight-back.

“We’re not losing this game, that’s what was on my mind the whole game and that’s the way we played, especially last quarter,” Bogdanovic said. “We kept believing.”

Young scored 10 points in the final frame and Bogdanovic had nine as the Hawks rallied after being out-scored 31-16 in the third.

“The way we played, the way we didn’t quit until the end, this shows us the character of the team,” Bogdanovic said.

Tyler Herro led Miami with 24 points. Butler and Max Strus added 20 apiece, Butler shaking off a collision with John Collins that sent him crashing to the floor under the basket in the opening minutes.

Miami point guard Kyle Lowry scored just six points before he was ruled out with a hamstring injury in the third quarter.

The Hawks will try to level the series at two games apiece when they host game four on Sunday.