NBA: DeMar DeRozan puts up 41 as Bulls pull even with Bucks 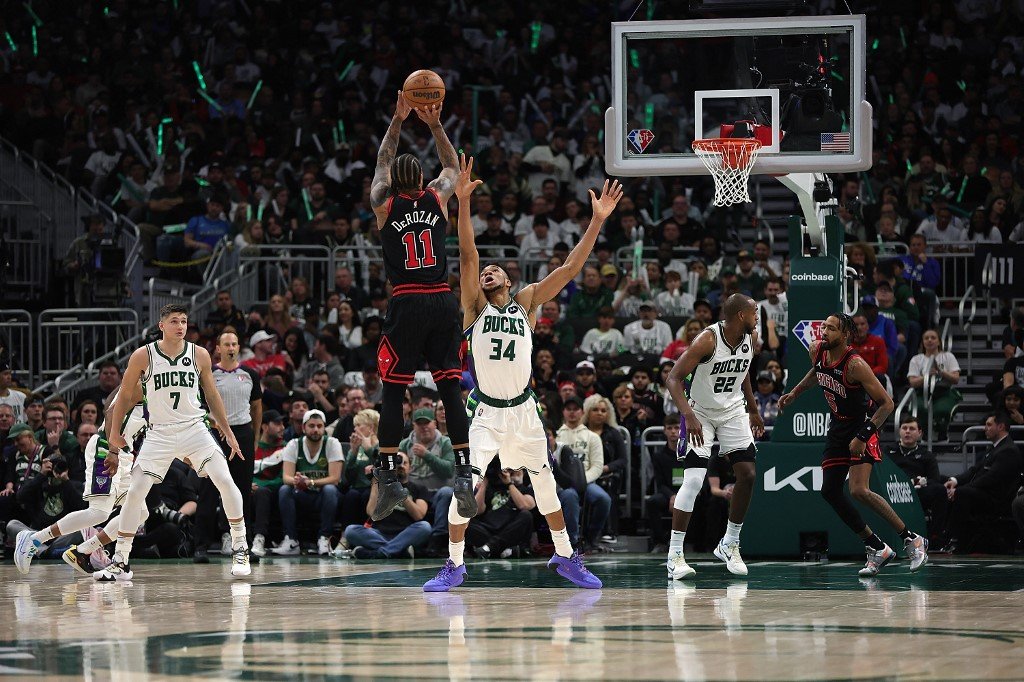 DeMar DeRozan #11 of the Chicago Bulls shoots over Giannis Antetokounmpo #34 of the Milwaukee Bucks during the second half of Game Two of the Eastern Conference First Round Playoffs at Fiserv Forum on April 20, 2022 in Milwaukee, Wisconsin.  Stacy Revere/Getty Images/AFP

DeMar DeRozan scored a postseason-career-high 41 points as the visiting Chicago Bulls earned a 114-110 win over the Milwaukee Bucks on Wednesday night in Game 2 of their first-round Eastern Conference playoff series.

The best-of-seven series is tied 1-1 heading to Game 3 in Philadelphia on Friday.

DeRozan sank 16 of his 31 field-goal attempts and all nine of his free-throw attempts. He also made a critical layup with 18.2 seconds left to play after Milwaukee had trimmed a 16-point, fourth-quarter deficit to three.

Giannis Antetokounmpo paced the Bucks with 33 points, 18 rebounds and nine assists on 11-of-20 shooting. He passed Kareem Abdul-Jabbar as the Bucks’ all-time playoff scoring leader.

Chicago opened up an 18-point lead in the third, but Milwaukee trailed by just seven heading into the fourth. Antetokounmpo and Middleton combined for 25 of Milwaukee’s 31 points in the third period.

The Bulls opened the final frame on a 9-0 run. Although the Bucks nearly came back, Chicago never surrendered the lead after the first quarter.

DeRozan led all scorers with 17 first-half points, while LaVine added 14.

Antetokounmpo put up 14 points and Lopez had 13 as the only Bucks to score in double figures through the first 24 minutes of action. The hosts hit half of their 14 3-point attempts before intermission.

Milwaukee’s 10 first-half turnovers proved to be costly, as they translated into 13 points for the Bulls. Overall, the Bucks gave the ball away 15 times while Chicago had 13 giveaways.

Both teams shot 50 percent from the field in the first quarter. Chicago jumped out to a 9-0 lead in the first two minutes but wound up leading just 29-28 heading into the second.