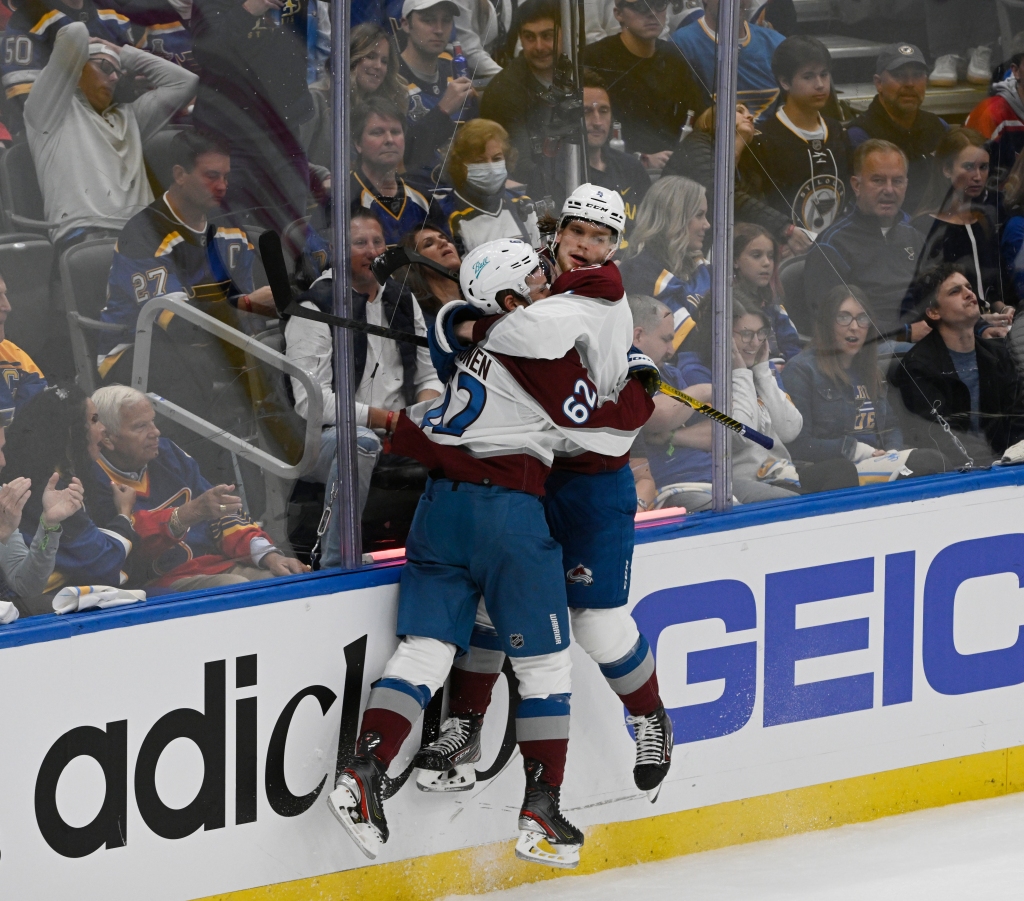 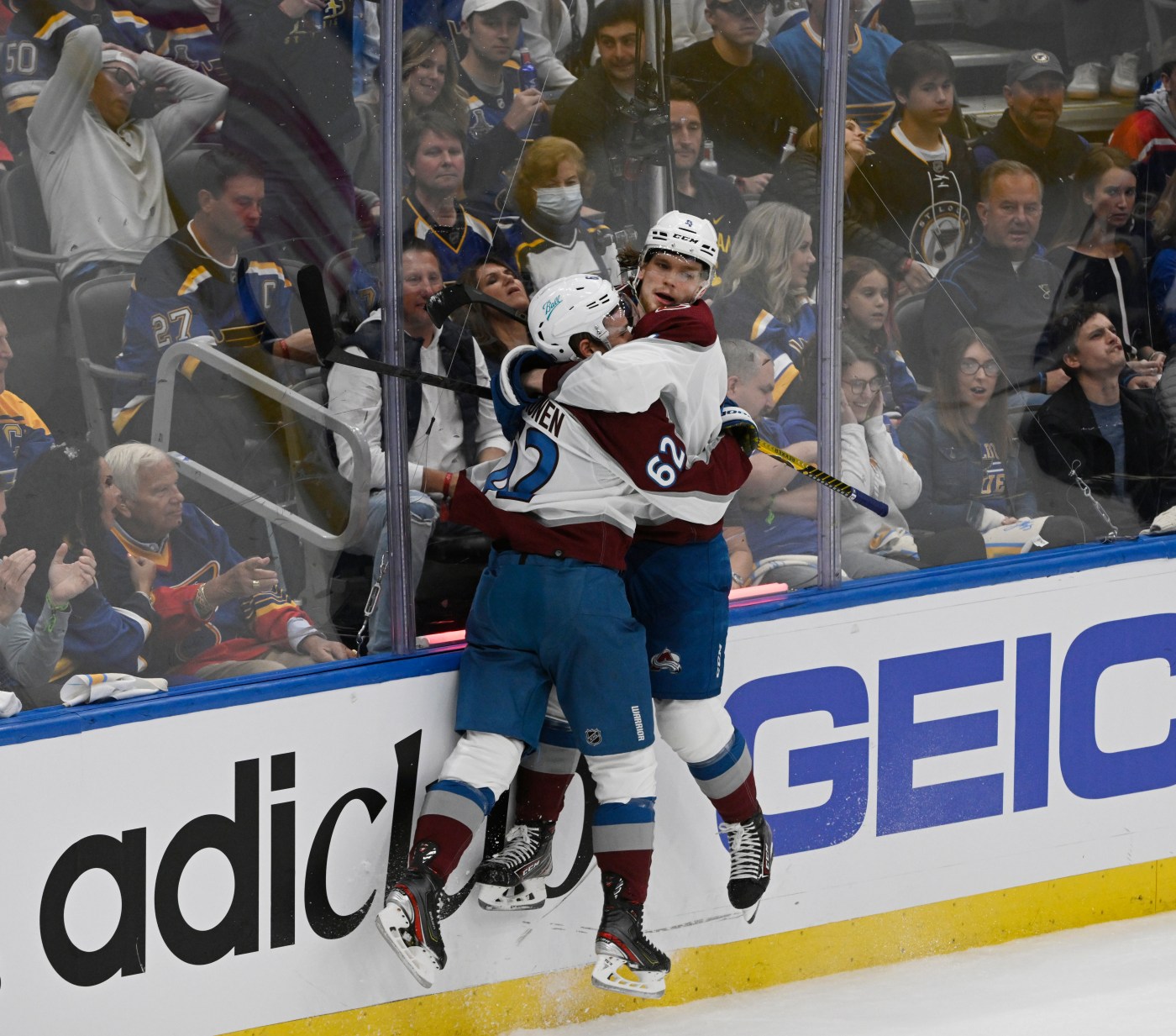 ST. LOUIS — Nazem Kadri was the player of the game and, thanks to a collision with St. Louis starting goalie Jordan Binnington, the center of attention in the postgame.

Kadri and Binnington, along with Blues defenseman Calle Rosen, collided early in the first period on Saturday when Kadri and his defender were battling for position and the puck.

Binnington sustained an injury and left the game. Kadri — the most booed player in the building — went on to have a hand in consecutive second-period goals as the Avs defeated St. Louis 5-2 in Game 3 of the Western Conference semifinal series at Enterprise Center.

In his TNT postgame interview in the hallway outside the Avs’ dressing room, Binnington allegedly threw a water bottle at Kadri.

“I think it was Binnington. But, I mean, I was a little tied up so you’ll have to ask him,” Kadri said.

Colorado leads the series 2-1, with Game 4 on Monday night.

“I thought the guys competed their butts off,” said Avs coach Jared Bednar, who began his postgame news conference by announcing defenseman Sam Girard broke his sternum and is out for the rest of the playoffs. “I thought we were highly competitive tonight in all areas of our game.”

Leading 3-2 late in the third period, Gabe Landeskog scored what amounted to an empty-net goal with Ville Husso scrambling to get back in the crease with just over two minutes left to ice the game. Artturi Lehkonen added another empty-netter in the final minute.

“It was a good answer from the last game,” Lehkonen said of the rematch from Game 2’s 4-1 loss at Ball Arena. “We can still clean up some stuff in our game and we just got to move on to the next one.”

The Avs built a 3-1 lead on second-period goals from Kadri and Lehkonen, the latter set up by Kadri. But Blues captain Ryan O’Reilly, the former Colorado center, scored with 30 seconds left in the frame to get St. Louis within 3-2 to begin the third.

Colorado goalie Darcy Kuemper had 29 saves through two periods and stopped all eight shots he faced in the third.

Kadri’s go-ahead goal came seconds after an Avalanche power play expired — and a little more than two minutes after St. Louis was denied a glorious scoring chance because of Pavel Buchnevich’s interference minor. Right after Buchnevich was released from the penalty box, Cale Makar shot from the high slot and Kadri deflected the puck into the goal.

A little less than four minutes later, Kadri’s zone exit pass was picked up by Lehkonen in the neutral zone and created a 2-on-1 into the Blues’ end. Lehkonen looked off Bo Byram for the pass and wristed the puck past backup goalie Ville Husso for the 3-1 advantage.

Husso replaced Binnington, who skated off with an apparent lower-body injury 6:45 into the game. Kadri and Rosen collided with Binnington in the crease while battling for a loose puck.

Asked about the play in the postgame news conference, Blues coach Craig Berube insinuated the play might have crossed the line.

“Look at Kadri’s reputation, that’s all I have to say,” Berube said.

Bednar was furious when asked to respond to Berube’s comment, saying that both players were clearly going for a loose puck. “Reputation has nothing to do with it.”

Kadri was issued an eight-game suspension for a check to the head of Blues defenseman Justin Faulk in last season’s playoffs.

Earlier in the first period Saturday, the Avs lost Girard. He absorbed a big behind-the-net check from St. Louis forward Ivan Barbashev and appeared to hit his head on the glass, as well as the ice after he fell. Girard was transferred to a local hospital for further evaluation.

The teams traded first-period goals. St. Louis defenseman Colton Parayko’s long slap shot broke the stick of Colorado defenseman Devon Toews and found its way behind Kuemper 3:55 into the game for a 1-0 lead. It was the third consecutive non-empty-net Blues goal off an Avalanche defenseman’s stick in the series.

The Avs made it 1-1 shortly after killing off a penalty. Defenseman Josh Manson came out of the penalty box and tried to glove a clearing lob pass from Darren Helm. Logan O’Connor hunted down the bouncing puck and wristed it past Husso.

The Avalanche is 3-0 on the road this postseason, the only team without a road playoff loss.

Footnotes. The Avs made one lineup change from Game 2: O’Connor made his series debut, replacing Nico Sturm on the fourth line. The other healthy scratches were forward Alex Newhook and defensemen Jack Johnson, Kurtis MacDermid and Ryan Murray.