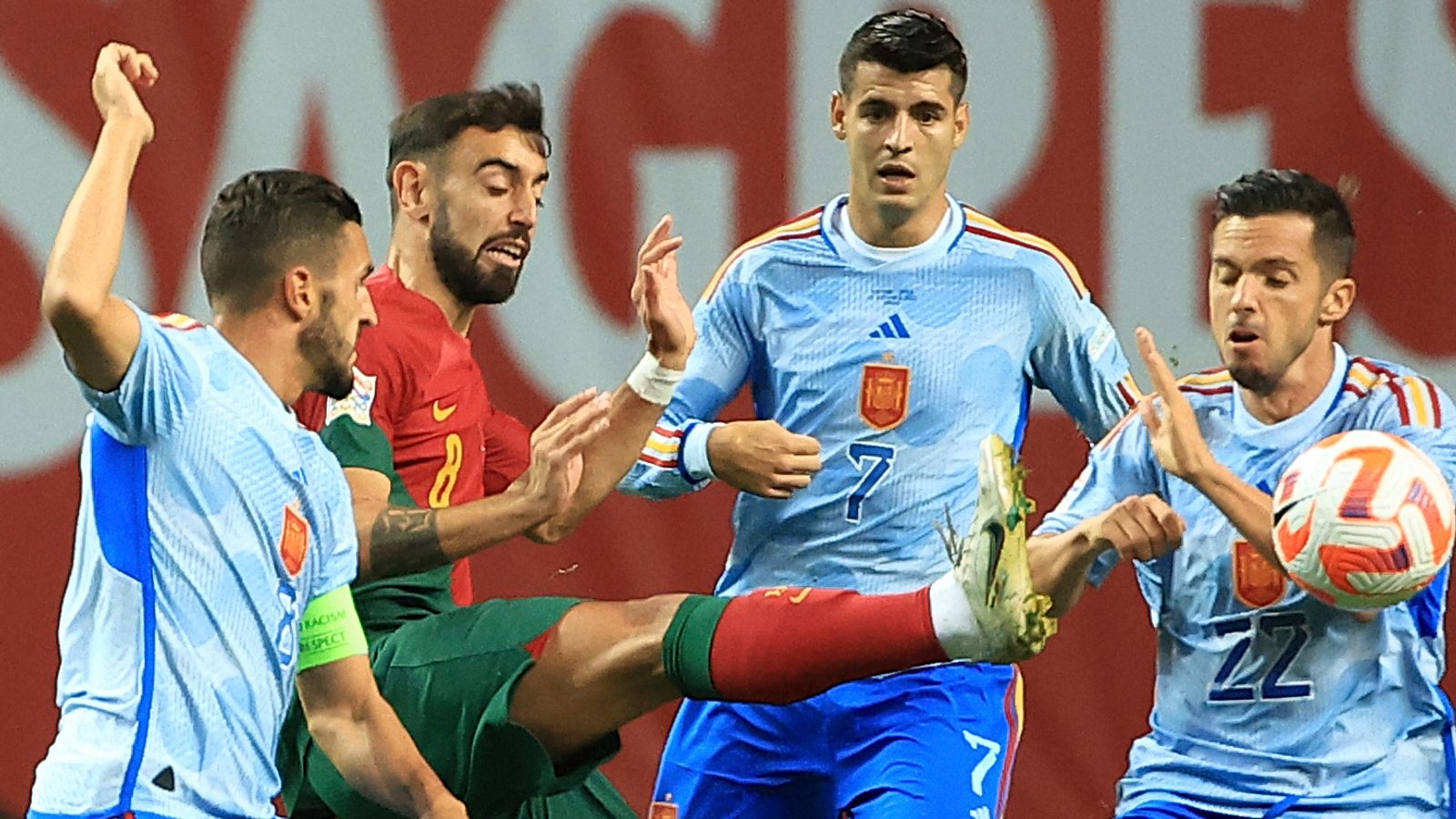 Spain snatched a place in the Nations League final four after striker Alvaro Morata’s late goal secured a 1-0 win over hosts Portugal on Tuesday to ensure top spot in their group.

Portugal dominated the match but Spain stayed in the contest and in the 88th minute Morata lashed the ball home to silence most of the sold-out stadium after a long ball into the box from Dani Carvajal was headed back across goal by Nico Williams.

Spain finished top of League A-Group 2 on 11 points from six games, one point above second-placed Portugal who only needed a draw to secure a spot in the semi-finals.

The Spaniards join Croatia, Italy and the Netherlands in next year’s finals tournament.

“It was a difficult game but I stay with the attitude of the team. We have made a great effort,” Morata told reporters. “If we were knocked out, it had to be by leaving everything on the field and that’s how it was one more time for us.

“Every time that Spain have to show up in big games, we do it. That’s how we do it and tonight we did it again.”

It was a bitter blow for Cristiano Ronaldo’s Portugal who created several chances, were in total control during most of the game and looked so close to securing a place in the finals.

The hosts almost opened the scoring in the 32nd minute through Diogo Jota, who received a long pass from Bruno Fernandes and lashed a shot towards the top right corner that Unai Simon kept out with a brilliant one-handed save.

Fernandes almost scored himself five minutes later when he rifled a cross shot into the side-netting with an effort that was so close the home fans thought it was a goal.

Spain looked lost and confused in what was looking to be another lacklustre performance after they went down 2-1 at home to Switzerland on Saturday.

It was not until he made four substitutions in the second-half that Spain woke up and got their first shot on target of the game after 70 minutes through Morata.

The Atletico Madrid forward almost scored in the 76th minute when he fired a long-range shot towards the bottom right corner that Diogo Costa kept out with an outstanding one-handed stop.

Ronaldo tried hard to score but his play was often erratic and he was unable to successfully link up with his team-mates, who kept missing chances and left Spain in the game, allowing Morata to be the hero again with his late winner.

Serbia gain promotion to League A

Elsewhere, Serbia striker Aleksandar Mitrovic netted his 50th international goal as his side outclassed Norway with a 2-0 win to top Nations League B Group 4 and gained promotion to League A.

Serbia finished the campaign on 13 points from six games, three ahead of second-placed Norway, who would have won the group with a draw. Slovenia finished third on six points, with bottom side Sweden relegated to League C on four points.

Norway’s Erling Haaland almost got the home side off to a perfect start but his first-time shot after 20 seconds was brilliantly saved by Vanja Milinkovic-Savic, setting the tone for a frustrating evening for the striker.

Dusan Vlahovic gave the visitors the lead in the 42nd minute when Filip Kostic pulled the ball back and the striker fired it through a thicket of legs into the net.

Mitrovic, already Serbia’s record scorer, doubled his side’s advantage nine minutes into the second half with a typically precise finish from Ivan Ilic’s pass, and he almost netted a second with a header in the 76th minute.

Roared on by a packed Ullevaal Stadium, Norway did their best but lacked the guile to break down Serbia, who will face Brazil, Cameroon and Switzerland in Group G at the World Cup in Qatar, which Norway missed out on qualifying for.

Czech Republic relegated to League B

Meanwhile, two goals in a minute from Remo Freuler and Breel Embolo steered Switzerland to a 2-1 victory over luckless Czech Republic at Kybunpark on Wednesday, a result that relegates the Czechs from Nations League A.

World Cup-bound Switzerland finished third in Group 2 with nine points from their six games, two behind winners Spain, while Czech Republic could only manage four points in the campaign.

Freuler headed Xherdan Shaqiri’s cross into the net on 29 minutes and straight from the kick-off Embolo collected a loose pass, ran to the edge of the box and fired a low shot into the bottom corner.

The visitors reduced the deficit before half-time when Patrik Schick scored with a left-footed finish from David Zima’s low cross, while later Tomas Soucek saw his penalty saved by Swiss goalkeeper Yann Sommer on a tough night for the visitors, who also struck the frame of the goal on two occasions.