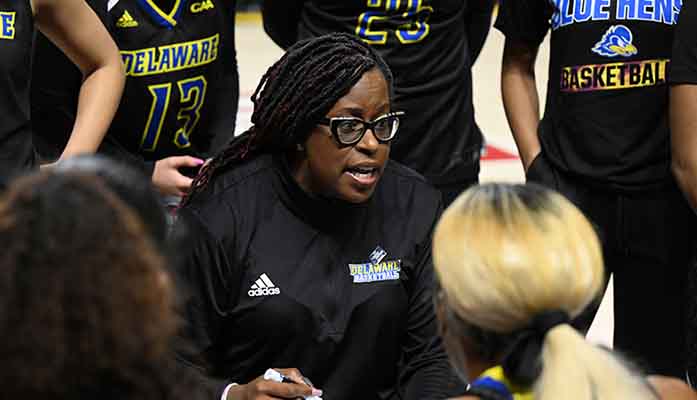 PHOENIX – Taking over a position that has been successfully managed for a quarter century is never easy in any profession. When it’s a coaching position at a Pac-12 school in an era defined by the transfer portal, the task is even tougher.

Natasha Adair is entering her first season at the helm of Arizona State women’s basketball after longtime Sun Devils coach Charli Turner Thorne retired following the 2021-22 season with a career record of 488-294, a mark that includes 14 NCAA tournament appearances.

Adair’s first duty is to restore luster to a program that, on paper and over the airwaves, is not predicted to win many games. The Sun Devils were picked by pundits – the league’s coaches and 28 media members who cover it – to finish last in the Pac-12 in the preseason poll, but that doesn’t mean the expectations of the new coach are limited.

“Expectations are always to win,” said Adair, who took over at ASU after five stellar seasons coaching Delaware that included a CAA Coach of the Year award. “I’m a competitor. When that ball gets tipped, we want to make sure we’re the most competitive and prepared team.”

The ability to compete and prepare are intangibles well within the control of Adair and her players, but whether that will translate to the win column is fair to question. The Pac-12 has three teams in the preseason AP Top 25, headlined by the No. 2 Stanford Cardinal.

ASU junior guards Jaddan Simmons and Sydney Erikstrup joined Adair for the Pac-12’s recent Media Day in the Bay Area. Besides the backcourt duo, only four other players transitioned from the Turner Thorne era to Adair’s debut season, which tips off Monday when the Sun Devils host Northern Arizona.

“We hit the ground running and we had to sign seven new players,” Adair said, describing some of the challenges the coaching staff has faced.

Forming chemistry can be tricky with so many new players. They have their own unique style of play, their own disparate personalities off the court, their own way of getting motivated. But Adair’s emphasis on preseason bonding appears to have paid off.

“We went to the pumpkin patch, we’ve done escape rooms … many different things that get us all out of our comfort zones,” Erikstrup said. “We all have such different personalities, but I think that’s what makes us all so special as a team.”

To turn that special feeling into positive results on the court, the Sun Devils need Simmons to be a leader. In 26 games last season, she averaged 9.6 points, 3.4 rebounds and 2.8 assists in 29 minutes per game. Those numbers will have to tick up this year in order for the Sun Devils to exceed expectations. Last season, she shot 32% from beyond the arc and has made that part of her game a point of emphasis throughout the offseason.

“Three-point shooting was my biggest struggle the last two years,” Simmons said. “I think this year we’ve done a good job of getting me comfortable enough to shoot it fast.”

Adair has made it clear that speed is going to be an important characteristic of her program, saying she’d like to play at a tempo that is “uncomfortable to guard.”

The Sun Devils may not have the talent on paper of certain other Pac-12 schools, but altering controllable aspects such as tempo can give Adair’s team an edge.

ASU was in the Sweet 16 as recently as 2019, so getting picked in the preseason poll to finish last is unfamiliar territory in Tempe. Turner Thorne proved that national relevance at ASU is possible, and Adair feels she has all the tools to take the Devils dancing once again in the near future.

“I wanted to be here to continue to grow and get us back to national prominence and stay there,” Adair said. “We have every component, recipe, ingredient, and support to get it done.”