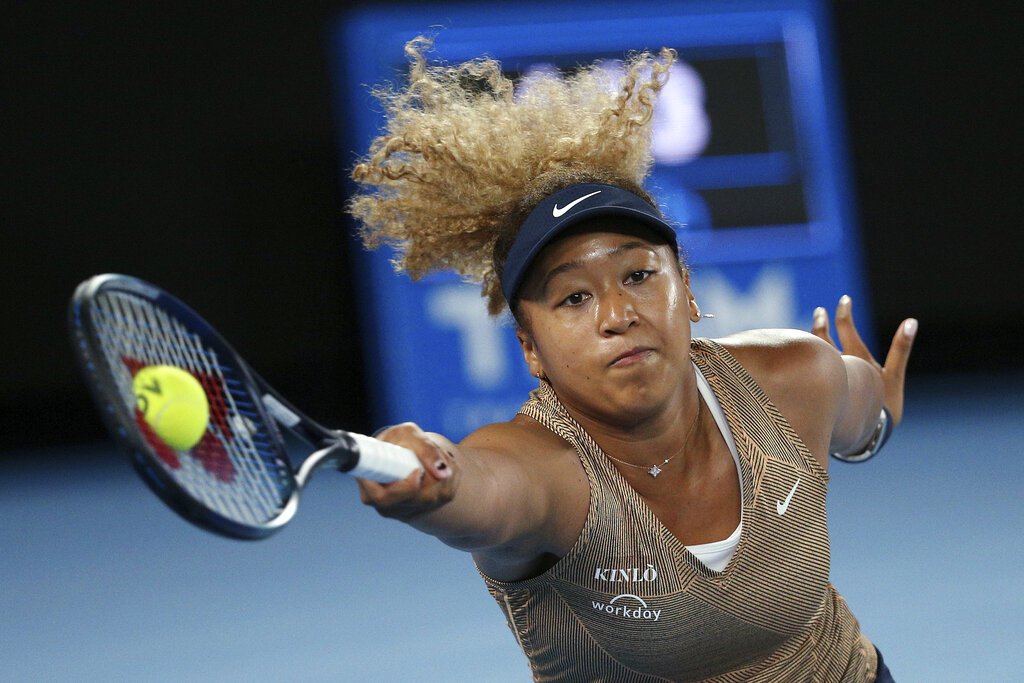 Naomi Osaka of Japan plays a forehand during their singles match against Andrea Petkovic of Germany at the Summer Set tennis tournament ahead of the Australian Open in Melbourne, Australia, Friday, Jan. 7, 2022.

PARIS — Naomi Osaka cracked jokes at Roland Garros on Friday — and, yes, laughed at those jokes. She smiled after some reporters’ questions. She paused to contemplate, as is her wont, before offering answers.

All of which seemed to confirm this assessment that she offered during an 18-minute pre-tournament French Open news conference, one year after she declared she would avoid talking to the press and then withdrew before the second round: “For the most part, I think I’m OK.”

Osaka used those words at the conclusion of a lengthy and thoughtful reply about what it was like to come back to a place where her last trip was so much more about her well-being and off-court mindset than her tennis. Which is saying something when the subject is a player who already owns four Grand Slam titles and has been ranked No. 1.

“I’m not going to lie. When I first came here, I was very worried. I was just kind of worried if there would be people that — of course, I also didn’t like how I handled the situation — but I was worried that there were people that I offended some way, and I would just kind of bump into them,” Osaka said Friday, her eyes darting around the room, her words separated by the occasional pause. “But I think everyone has been really positive, for the most part. I’m not really so sure. I was also very worried about this press conference, because I knew I’d get a lot of questions about this.”

Continuing, Osaka said: “For me, where I am right now, I wouldn’t want to say — it hasn’t left my mind. Of course, I’m still thinking about it.”

Before the 2021 French Open, Osaka vowed to not “do any press during Roland Garros,” framing the matter as a mental health issue, saying it can create self-doubt to have to answer questions after a loss. She stuck to that stance, skipping the tournament’s media day — which is what Friday’s setting was — and her mandatory news conference after winning in the first round, which drew a $15,000 fine. Osaka also was threatened by all four Grand Slam tournaments of possible additional punishment, including disqualification or suspension.

She responded by pulling out of Roland Garros, explaining that she experiences “huge waves of anxiety” before speaking to the media and revealing she has “suffered long bouts of depression,” helping make such comments more common among athletes, not to mention society at large.

Osaka also sat out Wimbledon and, later in the season, took another mental health break after losing at the U.S. Open.

She returned to the Grand Slam stage in January at the Australian Open, where was the reigning champion.

Osaka lost in the third round there to Amanda Anisimova, a 20-year-old American who just so happens to be Osaka’s first opponent in Paris.

Her ranking has fallen to No. 38, mostly because of a lack of action, and her preparation for the French Open was hardly ideal: Osaka withdrew from the clay-court tournament in Rome this month because of a lingering injury to her left Achilles heel.

“For me, there is no way I’m not going to play this tournament, so of course, you kind of have to manage things. But at the same time, I’m going to pop a few painkillers. … I have actually played a lot of Grand Slams with something,” she said. “So I think maybe there is a possibility I could play really good when I have an injury, because I feel like I don’t have anything to lose.”