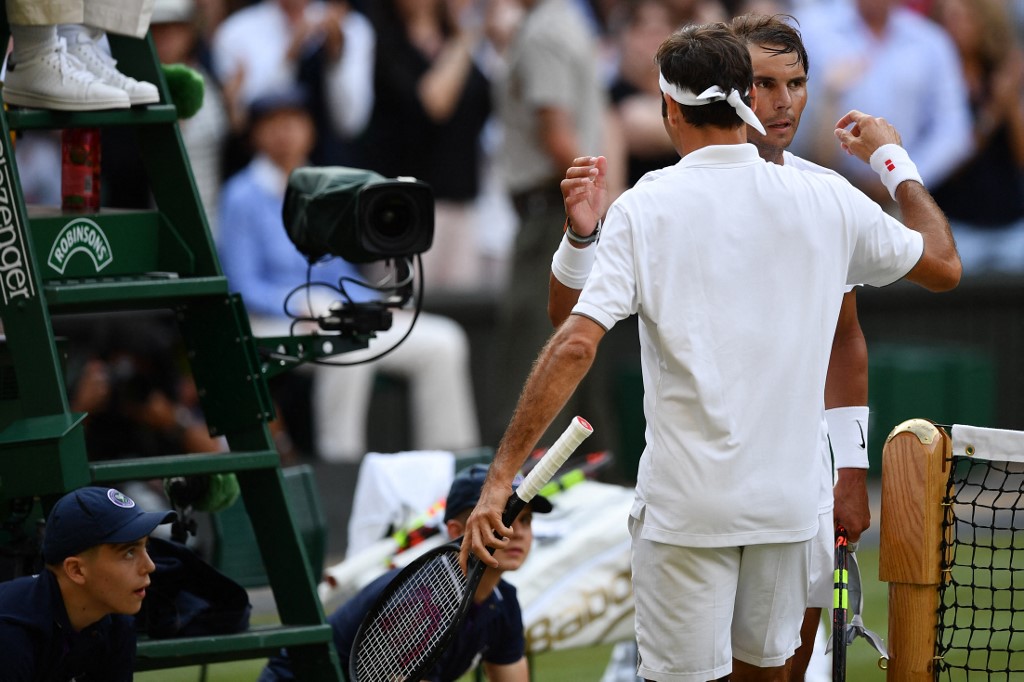 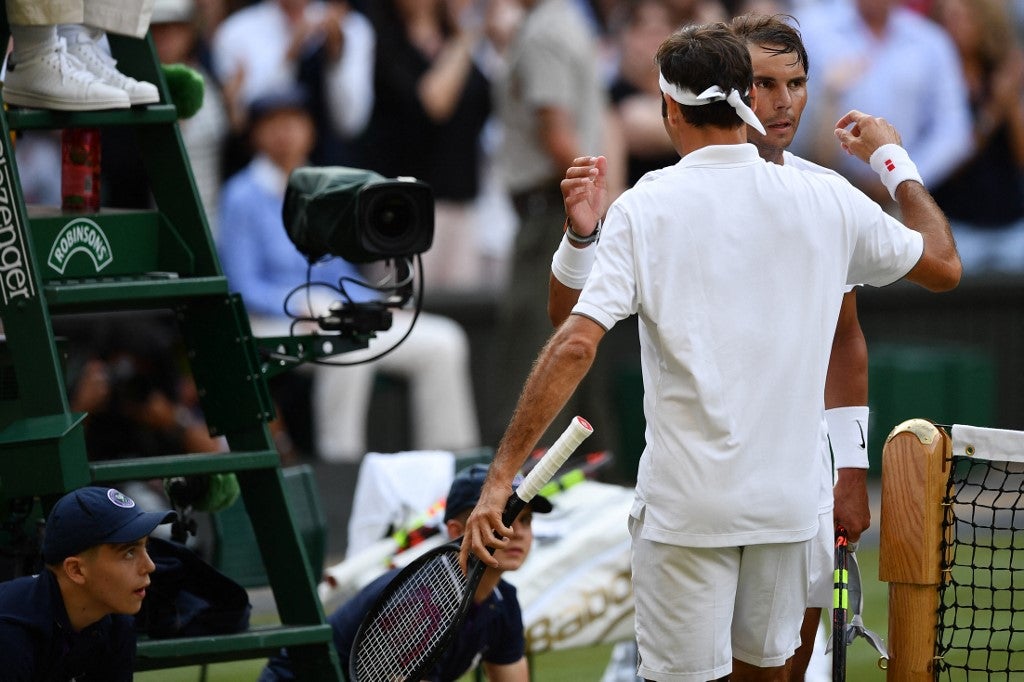 Switzerland’s Roger Federer (L) is congratulated by Spain’s Rafael Nadal after their men’s singles semi-final match on day 11 of the 2019 Wimbledon Championships at The All England Lawn Tennis Club in Wimbledon, southwest London, on July 12, 2019. (Photo by Daniel LEAL / AFP)

Their epic rivalry includes three successive Wimbledon finals from 2006 — the first two won by Federer and the last by Nadal in unforgettable fashion in 2008.

Federer played in the juniors at Wimbledon in 1998 and has been back every year since, winning a record eight titles and establishing himself as the king of the lawns.

But the 40-year-old will be absent this year as the 36-year-old Nadal seeks to continue his quest for the calendar year Grand Slam, having won the Australian Open and French Open to take his haul of majors to a record 22.

Federer’s absence because of a knee injury that has sidelined him for a year will leave Wimbledon a little empty.

Nadal acknowledges that without the Swiss raising the bar, his own achievements might not have been possible.

“I mean, we shared lot of important things together,” second seed Nadal told reporters on Saturday. “It’s difficult in some ways to think of tennis in the last 15, 20 years without thinking about the rivalry that we have.

“I think in some way we push each other. I always wanted to think that my motivation never comes to me because of others, that it’s a personal motivation.

“But, of course, to have somebody like him, like a rival, that he’s amazingly good, helps you to let you know the things that you have to do better.”

Federer has hinted at making a comeback after Wimbledon with an eye on the U.S. Open, which could allow Nadal to complete his collection against the Swiss great.

“We’ve been playing in every big stadium, but not in New York, that’s the only thing that bothers me a little bit, that we never played in New York,” Nadal said.

Nadal’s appearance at Wimbledon was thrown into doubt over a foot injury that required him to have a numbing injection at the French Open just to get through his matches.

A small surgical procedure since has allowed him to play without terrible pain, but the Spaniard said that he does not know whether the injury will flare up again.

“I can’t tell you if I’m going to be in this positive moment for one week, for two days, or for three months,” he said.

Of course, the treatment that I did didn’t fix my injury, not improving my injury at all, but it can take out a little bit of the pain. That’s the main goal.

“For the last two weeks, I didn’t have one terrible day where I can’t move at all. Of course, some days are better; some days are a little bit worse.”