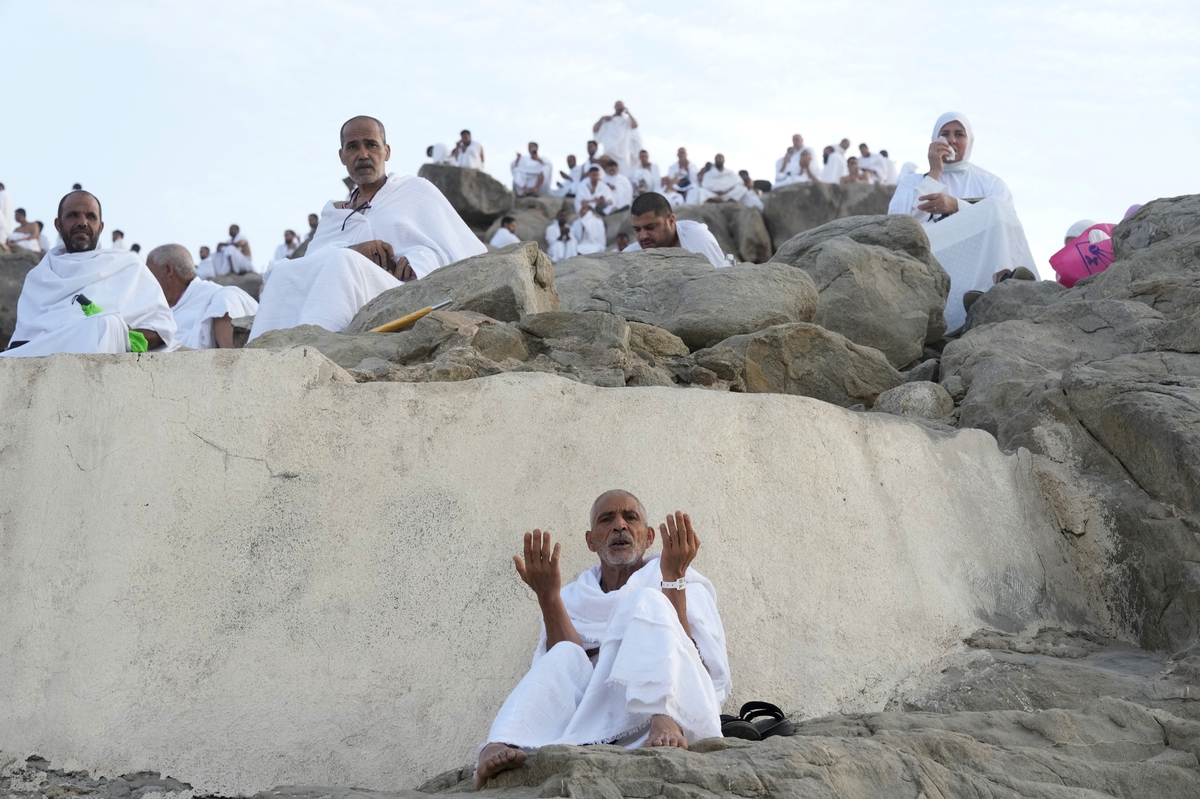 Muslim pilgrims pray on top of the rocky hill known as the Mountain of Mercy, on the Plain of Arafat, during the annual hajj pilgrimage, near the holy city of Mecca, Saudi Arabia, Friday, July 8, 2022.

MOUNT ARAFAT, Saudi Arabia — Hundreds of thousands of Muslim pilgrims from around the world raised their hands to heaven and offered prayers of repentance on the sacred hill of Mount Arafat in Saudi Arabia on Friday, an intense day of worship considered to be the climax of the annual hajj.

Multitudes stood shoulder to shoulder, feet to feet, for the emotional day of supplication in the desert valley where Muslims believe the Prophet Muhammad delivered his final sermon, calling for equality and unity among Muslims.

The experience sent many pilgrims to tears. Muslims believe prayer on this day at Mount Arafat, about 20 kilometers (12 miles) east of the holy city of Mecca, is their best chance at salvation and spiritual renewal. The pilgrims set out for Arafat before dawn, chanting as they trekked. They remain there until nightfall in deep contemplation and worship.

The hajj is a once-in-a-lifetime duty for all Muslims physically and financially able to make the journey, which takes the faithful along a path traversed by the Prophet Muhammad some 1,400 years ago.

Strict pandemic limits had upended the event for the past two years, effectively canceling one of the world’s biggest and most diverse gatherings and devastating many pious Muslims who had waited a lifetime to make the journey. This year’s pilgrimage marks the largest since the virus struck, although the attendance by 1 million worshippers remains less than half of the pre-pandemic influx.

All pilgrims selected to perform the hajj this year are under age 65 and have been fully vaccinated against COVID-19.

Pilgrims spend five days carrying out a set of rituals associated with the Prophet Muhammad and the prophets Ibrahim and Ismail, or Abraham and Ishmael in the Bible, before him. The rituals began on Thursday with the circling of the Kaaba, the black cube in the center of Mecca’s Grand Mosque, which Muslims around the world face during their daily prayers wherever they are in the world.

Around sunset on Friday, the pilgrims will march or take a bus 9 kilometers (5.5 miles) west to the rocky desert of Muzdalifa, where they comb the area for pebbles to carry out the symbolic stoning of the devil. That rite will take place on Saturday in the small village of Mina, where Muslims believe the devil tried to talk Ibrahim out of submitting to God’s will.

Pilgrims stone the devil to signify overcoming temptation. The ritual is a notorious chokepoint for surging crowds. In 2016, thousands of pilgrims were crushed to death in a gruesome stampede. Saudi authorities never offered a final death toll.

In their most noticeable effort to improve access, the Saudis have built a high-speed rail link to ferry masses between holy sites. Pilgrims enter through special electronic gates. Tens of thousands of police officers are out in force to protect the areas and control crowds.

With so many people from so many places crammed together, public health is a major concern. Saudi Arabia’s Health Ministry urged pilgrims to consider wearing masks to curb the spread of coronavirus, although the government lifted a mask mandate and other virus precautions last month.

The ministry also advised pilgrims to drink water and be aware of the signs of heat stroke in the desert, where temperatures can exceed 40 degrees Celsius (105 degrees Fahrenheit).

Once the hajj is over, men are expected to shave their heads, and women to snip a lock of hair in a sign of renewal.

Around the world, Muslims will mark the end of the pilgrimage with Eid al-Adha, or Festival of Sacrifice. The holiday commemorates the prophet Ibrahim’s willingness to sacrifice his son Ismail at God’s request. Muslims traditionally slaughter sheep and cattle, dividing the meat among the needy, friends and relatives.

Bank of America’s overdraft fees down 90% under new policy