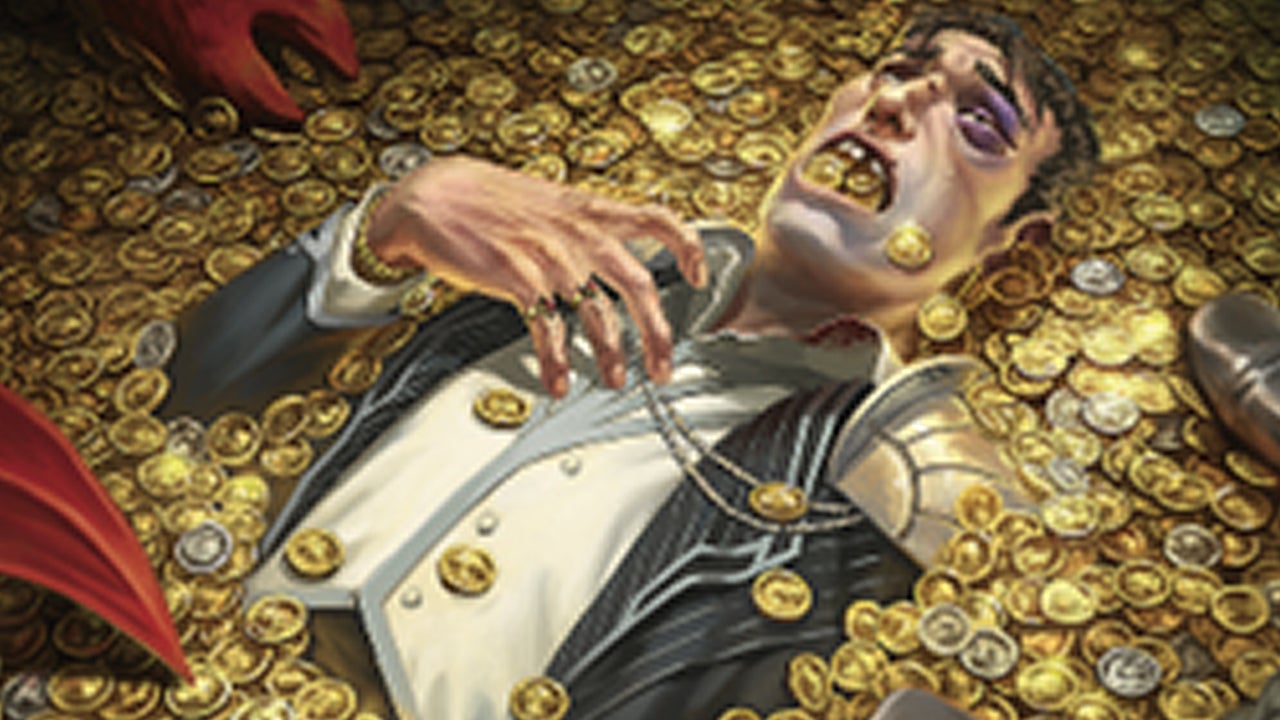 With Magic: The Gathering’s new Streets of New Capenna set just over the horizon, IGN is excited to reveal the full decklist for its Obscura Operation Commander preconstructed deck. Alongside official first looks at all of the deck’s new cards, I spoke with Wizards of the Coast senior designer Gavin Verhey to discuss its saboteur-focused design, the rise of Treasure tokens in Commander, and one of the deck’s breakout cards.

Like all five of New Capenna’s Commander decks, each based on a different one of its five demonic crime families, Obscura Operation contains 17 brand new Magic cards. It’s a White-Blue-Black deck lead by Kamiz, Obscura Oculus, with a strategy centered around using creatures that have a triggered abilities when they hit an opposing player – often referred to as “saboteurs.”

Flip through the gallery below to see all of the new cards alongside the full decklist, and read on just below that to hear Verhey talk about the deck itself and the increasing prevalence of Treasures in the format.

Magic: The Gathering – 17 New Cards in the Obscura Commander Deck

According to Verhey, this precon went through the most tweaks and changes of the five from New Capenna. “What we really wanted to capture was the feeling of the Obscura,” Verhey tells me, “and the Obscura in New Capenna can get in any locked door, they know all the secrets, and it was a great fit for Saboteurs.” That means you’ll be sneaking creatures past your opponents defenses to steal knowledge for yourself, frequently in the form of cards to play.

Verhey says a saboteur-themed precon is something WOTC has never actually done before. “We’re making plenty of Commander decks every year, and one of the things that we’re going to need to do to make that work is to try out different themes and find new and different themes to create.” In sets like new Capenna that have more than two precons, Verhey explains they generally try to make at least one of those decks a “slam dunk” in terms of what people already know and love about a color combination or strategy, but they also want at least one deck to be “a little out there,” both to keep things fresh and to potentially find new ground worth returning to later on.

But while Obscura Operation might be a little bit off the beaten path for a precon, one card in particular stood out to me as something we probably could have seen coming: Smuggler’s Share. This white enchantment (which can be seen in the gallery above) continues a recent initiative WOTC has been very open about, attempting to provide better card draw and mana ramp options to white – a color that has traditionally struggled with both of those things in the Commander format. Verhey says Smuggler’s Share is a card of his own design, and it strikes me as one we’ll see a lot of going forward.

“I think [Smuggler’s Share] has a huge chance to shine.”

“For Commander, we still need to find ways to have [white] be able to get card advantage and be able to get some amount of mana ramp in very white ways, and one way white can do that is by setting rules or taxing the opponent,” Verhey explains. To that end Smuggler’s Share doesn’t actually draw you cards unless your opponents do, and it doesn’t make you Treasure tokens unless your opponents are playing multiple lands (or cracking fetch lands) themselves. Even still, Verhey says “I think this card has a huge chance to shine,” comparing it to the likes of the Treasure-generating staple Smothering Tithe – though it’s a lot more “fair” than Tithe, by Verhey’s own admission.

The push to help white has been clear, but WOTC has also expressed a desire to make new Commander cards less generically powerful, instead fitting into more specific strategies so they don’t become auto-includes that homogenize the format. Smuggler’s Share struck me as a more broadly powerful design, and Verhey says that’s intentional (although it does depend somewhat on the decks you play against). “We love being able to try and make more narrow, niche cards that are targeted in a sense – the one place where we have been bending that a little bit is for white, just because white has lacked staples for a long time that are what it needs in Commander. So upping that a little bit is pretty meaningful.”

Speaking of Smuggler’s Share and Smothering Tithe, a hot topic amongst Commander players recently has been the power and prevalence of Treasure tokens in the format – something Verhey confirms is “a thing we’re certainly talking about and evaluating.” Originally introduced in Ixalan in 2017, these artifact tokens that can be tapped and sacrificed for one mana of any color have since become a common mechanic that can (and often does) show up in any set. While they can be a great way to both ramp out big cards and more easily fix your mana, some players are worried they may be too powerful now that they are easy to generate en masse.

The Command Zone’s Josh Lee Kwai tweeted recently that maybe all Treasures should follow in the steps of two New Capenna cards and come into play tapped, so I asked Verhey for his thoughts on both that idea and the concerns at large. “[Treasures are] generally pretty fun, I find. Like a little bit of mana boost is enjoyable, so I don’t mind Treasures coming in untapped most of the time. I think where it becomes the most dangerous is when a card is creating a huge blast of Treasures that come into play untapped.”

“I could definitely see a world in the future where we try and make the big blasts of Treasure come in tapped.”

Most experienced Commander players probably won’t be surprised to hear Verhey’s example of this: Dockside Extortionist, a creature from Commander 2019 that can produce boatloads of Treasure, poetically blasting its own price on the secondary market to more than $60USD at time of writing. “I could definitely see a world in the future where we try and make the big blasts of Treasure come in tapped, and then the slower trickles or the one ofs come in untapped.”

Another lesson Verhey says they’ve learned is to be careful about things that reward you simply for having Treasures, as “it turns out Treasure is already very good to have around, so having gigantic powerful Treasure rewards can be a little dangerous.” A good example of this would likely be Revel in Riches, a black enchantment that simply wins you the game if you start your turn with at least 10 Treasures – a task that has gotten substantially easier since it was printed in 2017.

That all said, Verhey also points out that Treasures play an important role in Streets of New Capenna’s Limited formats too, which revolve around three-color archetypes. “It’s a really great way to help you splash a third color or even a fourth color in some decks if you want to, so Treasure does have an extra bonus in Streets of New Capenna, which is pretty relevant.” That fixing angle could be part of why green is getting more Treasures this set as well – but, to that end, the card Bootlegger’s Stash already has certain members of the community bracing themselves for more explosions of Treasure around the Commander table.

Streets of New Capenna will officially release digitally on April 28 and physically April 29, with all five Commander precons available then. You can check out the card we previously revealed from the set here, or look back at a conversation with both players and Wizards of the Coast about the future of the game and its licensed crossovers.

Revengeance Is Blowing TF Up Thanks To Memes